Eden Project North is given the green light: Plans for £125m Morecambe Bay attraction that will be visited by 760,000 tourists a year and create 400 jobs are approved by council

Plans to build a northern version of the Eden Project, an eco-friendly tourist attraction, as part of a £125m project to revitalise a seaside resort were given the green light.

Council chiefs in Lancashire approved plans for the site on Morecambe’s seafront, which may attract 760,000 tourists a year and create around 400 jobs.

Lancaster City councillors voted in favour of the project at a crunch meeting today after hearing Eden Project North would be ‘transformative’. 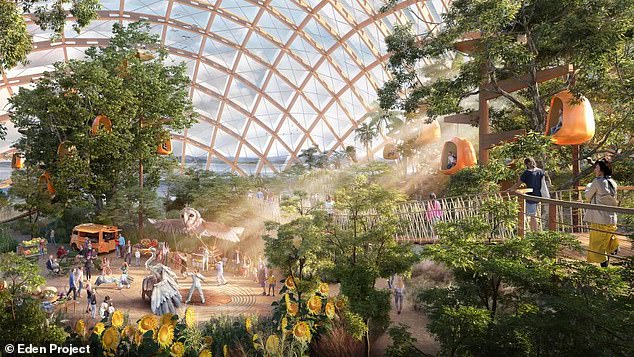 An artist’s impression of what the inside of Eden Project North in Morecambe, Lancashire, will look like

The project will be linked to its namesake in Cornwall but will be distinctly focused on Morecambe Bay and will open in 2024, councillors were told.

Eden Project says the bay area is of international importance to wildlife including birds that migrate from across the world.

It is also touted as a good location between Lancashire, the Yorkshire Dales and the Lake District for sustainable tourism.

The attraction will be built on the seafront at Marine Road, Morecambe, close to various grade II-listed buildings including the restored art deco Midland Hotel and the Winter Gardens, once dubbed the ‘Albert Hall of the North’.

Lancashire County Councillor Phillippa Williamson previously said of the plans: ‘This is a transformational project for Lancashire.

Four domes covered in solar panels will dominate the skyline by the sea, covering trees and wildlife 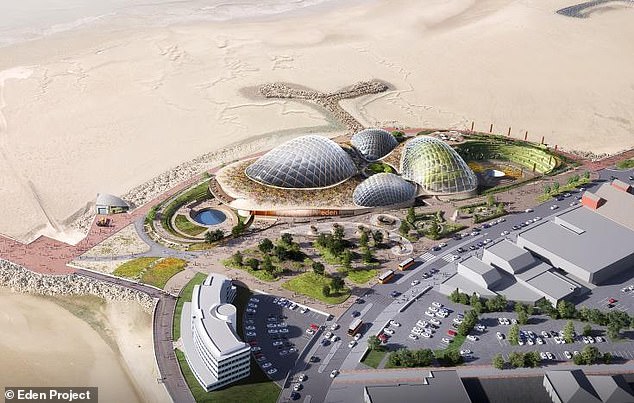 Eden Project North re-imagines Morecambe as a seaside resort for the 21st Century, inspiring wonder and a connection with the natural world drawing on the Eden Project’s focus on education, ecology and community

‘These proposals would bring a boost to Morecambe and the surrounding area, as well as benefits further afield for Lancashire and the north west.

‘We’ve been working with Eden for some time to understand their plans and how we can help make any journey for visitors to the site.

‘Whether by car, bicycle or public transport – as easy and sustainable as possible.

‘These are exciting times and we’re proud to be directly involved in helping to make this happen.’

Shell-like domes will be made from timber and covered in a transparent membrane with solar cells to go beyond net zero carbon emissions.

There will also be two restaurants with ‘spectacular views’ across Morecambe Bay.

The business case submitted in the application estimates visitors will fork out more than £200million each year in the region, which would support an additional 1,500 jobs.

David Harland, Chief Executive of Eden Project International, said: ‘The submission of the Eden Project North planning application is the culmination of years of hard work from the Eden team and our partners and a reflection of our many conversations with the Morecambe community. 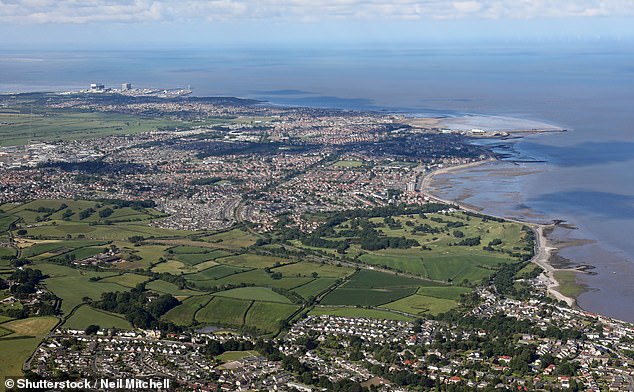 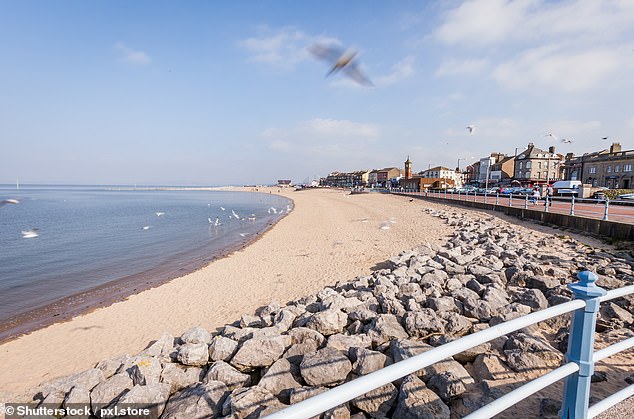 Pictured: The empty sandy beach of the Lancashire seaside town of Morecambe on a bright Spring day

‘Eden Project North is a true collaborative effort and everyone who has taken part in our consultations, both formal and informal, can be confident that their input has helped shape this project.

‘We are enormously proud of how this project has developed and hugely grateful to everyone who has contributed to it, especially considering the incredibly difficult circumstances of the last 18 months.

‘This is a huge moment for Eden Project North but we are not resting on our laurels.

‘The hard work continues and we hope to have positive news about funding for the project before the end of this year.’

The Eden team has already found success in the UK, with its project in Cornwall transforming a derelict former china clay pit into the world-class destination.

Eden in Cornwall has welcomed more than 22 million visitors to date and added more than £2.2billion to the regional economy since opening in 2001.