Rocky has nothing on this! After pulling himself back from the brink of suicide, how Tyson Fury conquered his demons to take world heavyweight title, writes PAUL BRACCHI

Tyson Fury’s comeback, culminating in his sensational victory in Las Vegas in the early hours of yesterday, eclipses the storyline of Rocky (…and Rocky II… Rocky III… Rocky IV… and Rocky V).

How so? You simply have to turn the clock back three years to a harrowing moment in October 2016 for evidence.

Tyson is behind the wheel of his Ferrari F12 on a motorway near his home in Morecambe, Lancashire. 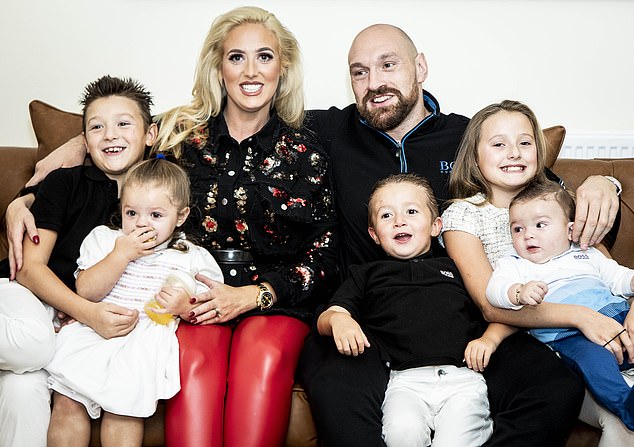 Nothing, in other words, in the life and times of Tyson Fury could be described as ‘normal’ – as anyone who has tuned into the first two episodes of the colourful documentary about his home life on ITV (Tyson Fury: The Gypsy King) will already have gathered

He is heading for a bridge, and his certain death, at 180mph. Suddenly, just before the needle on the speedometer touches 190mph, he comes to his senses and lifts his foot from the accelerator.

‘I heard a voice saying, ‘don’t do this. You’re going to destroy your family’s lives’,’ he would later recall, admitting he had told his wife Paris not to expect him back at home.

The suicidal man in the Ferrari that day bears no resemblance to the warrior who defeated Deontay Wilder in front of thousands of British fans (and countless more who stayed up all night to watch the spectacle on pay-per-view TV) at the MGM Grand Garden Arena.

At the time he had ballooned to 27 stone, a colossal weight even for someone of his 6ft 9 stature, after spiralling into depression, drug and alcohol addiction, and self-inflicted opprobrium with homophobic, sexist and anti-Semitic pronouncements.

‘His public stock was so low,’ wrote one leading boxing journalist, ‘that had he concertinaed his Ferrari into that bridge in Lancashire, the news would have elicited little more than a shrug in most non-boxing circles’. 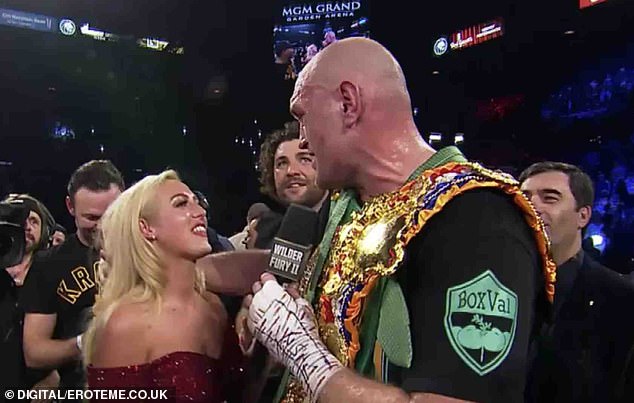 Tyson Fury’s comeback, culminating in his sensational victory in Las Vegas in the early hours of yesterday, above, eclipses the storyline of Rocky (…and Rocky II… Rocky III… Rocky IV… and Rocky V)

While many athletes, boxers included, before him have overcome injury and loss of form, few, if any, have achieved sporting and personal redemption quite like Tyson Fury.

His performance in Vegas, making his entrance on a throne, sporting a golden crown, to Patsy Kline’s ‘Crazy’ – a humorous nod to his own recent troubled past – prompted a radio commentator to declare that when he finally hangs up his gloves, he will be ‘remembered’ in the same way as the ‘Greatest’ himself, Muhammad Ali.

It is amusing to think that man-mountain Tyson arrived in the world three months premature, weighing just a pound and small enough to be held in the palm of a hand, with doctors giving him little chance of survival.

But fighting was in Baby Tyson’s genes.

Born into a travelling family in Wythenshawe, a tough suburb of Manchester, he is from a long line of bare-knuckle scrappers who settled their differences the traditional way, in fields, yards and fairground booths; his father completed a prison sentence a few years ago for gouging out an opponent’s eye in a brawl.

Nothing, in other words, in the life and times of Tyson Fury could be described as ‘normal’ – as anyone who has tuned into the first two episodes of the colourful documentary about his home life on ITV (Tyson Fury: The Gypsy King) will already have gathered.

‘I want my kids to be brought up as travellers,’ reveals Mrs Fury, 30, who is also from the travelling community.

‘They will probably leave school at 11 and they’ll be educated at home from then.’

(Tyson, it has to be said, disagrees and wants them to have an education.)

The couple were childhood sweethearts and even after they became engaged, he would stay in the caravan in the yard of her parents’ house while she slept inside.

They were married in 2008 (when he was 19 and she was 17) at a ‘Big Fat Gypsy Wedding’, with 400-odd guests, in the bride’s hometown of Doncaster. Fury’s home is now a mansion in Morecambe – complete with custom-made bed, 7ft in width and length.

It is apparent almost from the moment the camera starts rolling that 5ft 7in Mrs Fury is capable of delivering a few jabs and upper cuts (metaphorically speaking) of her own.

On one occasion, as they prepare to embark on a night out, her husband’s appearance (he has a liking for outrageously gaudy suits and jackets) prompts her to say: ‘You are punching above your weight.’

On another, Tyson is seen taking out the nappies and going to the skip. ‘I’ll refuse to do it,’ says Mrs F, who insists Tyson splits the chores when he is at home.

The pair keep a box of mementos from their courtship, including heart-shaped lollipops and the (first) plastic engagement ring he gave her when he was laying tarmac in between boxing bouts. She earned more than him at the time as a beautician.

Even before his latest triumph, Tyson was reportedly worth in excess of £100 million. Behind the showmanship, behind the eccentric outfits, behind all the hype, Tyson Fury has emerged as thoughtful, sensitive and intelligent with ambitions to be MP for Morecambe one day.

Could this really be the same man who, not so long ago, outraged public opinion?

His downfall began less than a year after the historic defeat, in 2015, of the then undisputed heavyweight champion Wladimir Klitschko that propelled the Gypsy King into the global spotlight. Within days of claiming the title, Fury, 31, a born-again Christian, was in trouble.

‘There are only three things that need to be accomplished before the Devil comes home,’ he announced. ‘One of them is homosexuality being legal in countries, one of them is abortion and the other one’s paedophilia.’ He added: ‘When I say paedophiles can be made legal, it sounds like crazy talk, doesn’t it? But back in the Fifties and early Sixties, for them first two to be made legal would have been looked on as a crazy man again.’

In the following weeks, more than 120,000 people signed a petition calling for him to be disqualified from BBC Sports Personality of the Year. He apologised, insisting his comments were ‘tongue-in-cheek’.

But later he caused further offence when he posted an interview on YouTube, speaking out against ‘Zionist, Jewish people’ who ‘own all the banks, all the papers, all the TV stations’.

He gave up training and soon pictures emerged of a man who, to quote one boxing writer, had gone ‘from an athlete with the world at his feet to a fat, bloated, pasty-faced 27 stone slob, boasting and ranting on social media’. 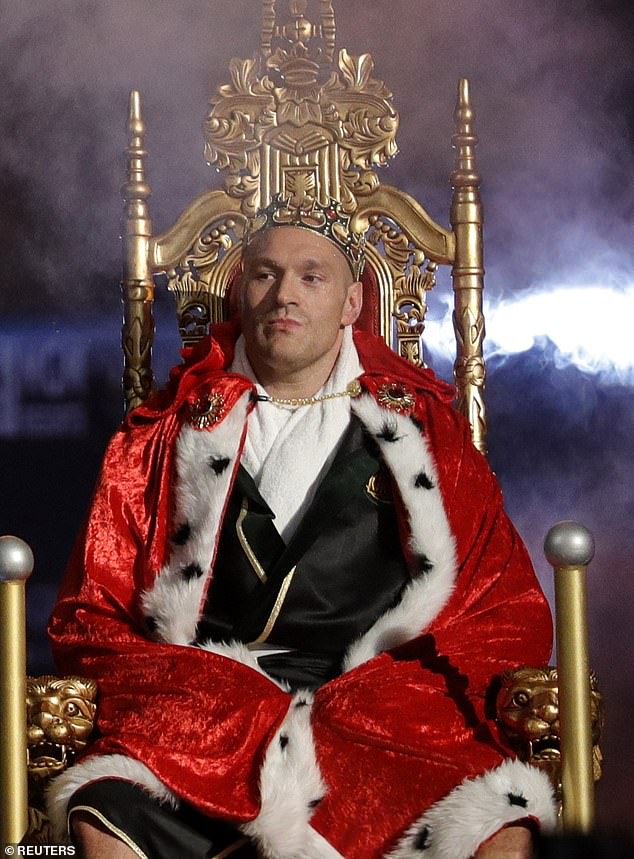 His response now when challenged about his behaviour was ‘the action of a very ill man who needed help’.

But Tyson Fury still had further to fall. He tested positive for the steroid nandrolone, and although he denied taking the banned substance – claiming that eating meat from an uncastrated boar was to blame – he agreed to a two-year suspension that he had effectively already served by the time the UK Anti-Doping agency had reached the decision.

In an interview with Rolling Stone magazine in 2016 he admitted he had been snorting cocaine, drinking daily and getting ‘as fat as a pig’.

The damage to his reputation seemed terminal. Few believed that he could drag himself off the canvas. They were wrong, as everyone now knows.

His rehabilitation started with seeking psychiatric help for bipolar disorder. He stopping taking cocaine and got his drinking under control.

But, most of all perhaps, he was applauded for highlighting the scourge of mental illness by talking openly and honestly about his own problems – and his own traumatic childhood.

Take this, for example: ‘One minute I’m over the moon, the next minute I feel like getting in my car and running into a wall at 100 miles an hour. I don’t know what’s wrong with me. I’m messed up… I do believe I’m mentally disturbed in some way.

‘Maybe it was the fact that when I was a kid we didn’t have a family life. My mother and father were always shouting and screaming at each other.

‘My dad had different women and different kids down the road. My mum had 14 pregnancies, but only four of us survived.’

Not surprisingly, his descent into the abyss put a strain on his own marriage. He temporarily split from his wife when he was linked with another woman.

‘I wanted to leave every day,’ Paris said in a recent interview. ‘If you truly love someone, you’re not going to leave them to crash and burn.’

Without her support, it is doubtful if this story would have had such a happy ending.

And everyone loves a comeback, don’t they?