One in six businesses say they are suffering from the impact of the rail walkouts, official data has revealed.

On top of the 16 per cent that said they had been affected were 28 per cent saying they were unable to obtain key goods.

The proportion could be even higher now because the Office for National Statistics collected the figures in November, before the current wave of industrial action.

The RMT’s 40,000 members will strike again for 48 hours from Friday, the 15th and 16th days they will have gone on strike since June. 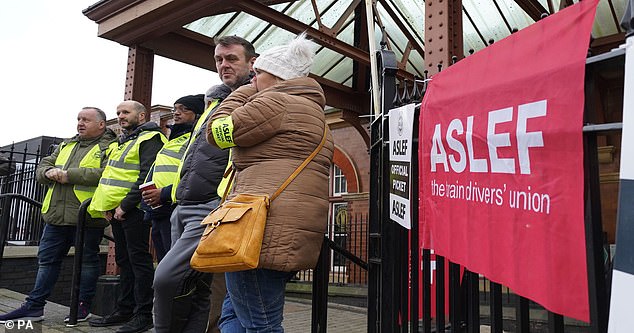 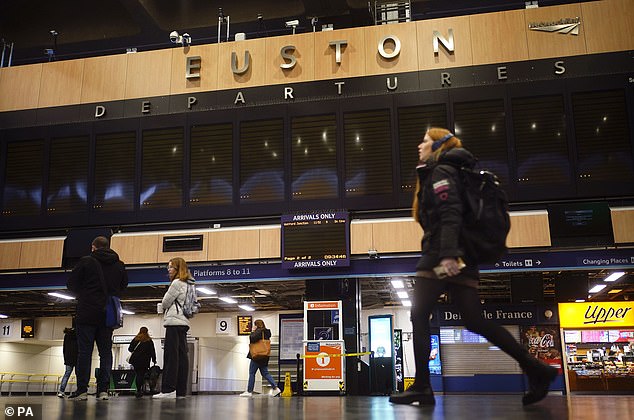 Today fewer than one in ten rail services ran due to a walkout by train drivers in the Aslef union as part of a separate dispute.

It was one of the most strike-disrupted days on the network for decades due to it combining with the knock-on effects from the RMT’s last 48-hour strike over Tuesday and Wednesday.

Aslef general secretary Mick Whelan said further strikes were ‘inevitable’ unless the deadlock in the bitter pay dispute was broken.

He also threatened an escalation in retaliation for the government pressing ahead with plans for new minimum service levels laws to limit the impact of walkouts.

He said: ‘Coming to the table will resolve this – threatening us with sacking or more pernicious legislation when we already have the worst trade union legislation in Europe, isn’t going to solve the issue.’

Today it was revealed that striking train drivers have enjoyed bumper pay hikes of up to 62 per cent in recent years – more than double the rate of inflation over the same period.

Industry figures show the average driver’s salary has surged by more than a third – 34 per cent – since 2012.

But the highest increases across 15 train operators covering most of the country were 55 per cent and 62 per cent.

By comparison, the Consumer Price Index rate of inflation over the decade amounts to about 27 per cent.

Aslef has not been made a formal pay offer yet but could be given one next week.

The RMT meanwhile has snubbed Network Rail’s offer of a 9 per cent rise over two years, worth up to 14 per cent for the lowest paid.

It has rejected a separate offer of 8 per cent from 14 train companies also involved in the dispute.