There were 30,402 positive test results recorded across NSW in the 24 hours to 4pm on Tuesday, 10,000 of which were registered across Sunday and Monday.

PCR tests results were not affected by the data processing issue.

On Tuesday, NSW Health Minister Brad Hazzard said he had asked health authorities to investigate whether significant numbers of people were failing to report positive tests.

He flagged there was a “mismatch” between current case numbers and prediction modelling.

“I fear they might be light on,” he said. 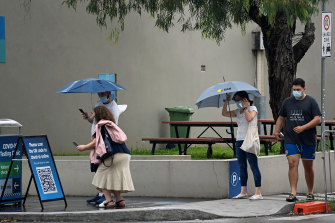 Members of the public queue in line for a COVID-19 test at the Royal Prince Alfred Hospital in January.Credit: Bianca De Marchi

“I’ve asked health to double-check the numbers [to] make sure we are getting all the cases.”

Mr Hazzard said the state government could no longer be “certain” all COVID-19 cases were being reported due to the use of at-home RAT tests.

“In the earlier stages we were as accurate as we could be because we had PCR tests, they were not being done at home,” he said.

NSW Health said the processing issue was now solved and only affected the reporting of cases.

Those who registered positive RAT tests across Sunday and Monday were still put in touch with medical care as per normal.

“There were 30,402 positive test results notified in the 24 hours to 4pm yesterday. This includes 22,748 positive RATs, with about 10,000 of those from Sunday and Monday,” a statement from NSW Health said.

“There were 7654 positive PCR results returned from a total of 48,987 PCR tests. PCR tests results were not affected by the data processing issue.”

Hospitalisations are stable, with 1016 admitted and 44 in intensive care units.