Nato officials slam Emmanuel Macron for shattering West’s united front against Putin: French leader ‘reveals his hand’ and says Paris WON’T use nuclear weapons even if Moscow does in Ukraine

Defence secretary Ben Wallace has rebuked Emmanuel Macron after the French president ruled out launching a nuclear strike on Russia.

The UK’s secretary of state for defence said Mr Macron had revealed his hand by confirming that if Vladimir Putin goes nuclear in Ukraine then France would not repay it in kind.

There are raised tensions that the Russian president could authorise a nuclear attack as his illegal invasion of Ukraine continues to falter, although the Kremlin has denied it intends to use its arsenal.

In recent weeks Nato allies have repeatedly warned that the consequences for Russia would be dire if it did launch such an attack, although the exact nature of these has been left deliberately ambiguous.

And these threats will loom large in the mind of Putin as nuclear bombers take off from bases in Britain next week in a drill to simulate a nuclear strike on his country.

The nuclear-readiness drill, which will take place over the course of next week, will see dozens of aircraft from Nato allies scrambled as part of the drill and in united show of force. 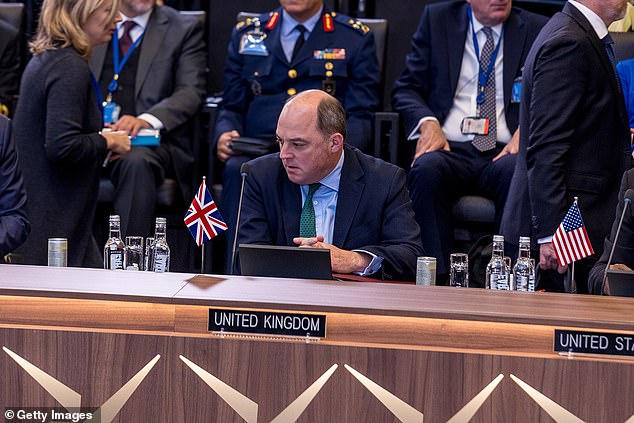 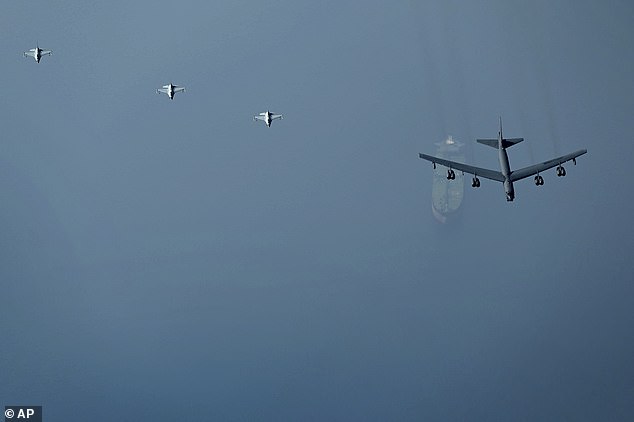 However, a chink in that united front appeared yesterday when Mr Macron seemed to rule out using his country’s nuclear arsenal in the event of a strike by Putin for fear of causing a ‘global war’.

Speaking with state broadcaster France 2, he said: ‘Our doctrine rests on the fundamental interests of the nation. They are defined clearly and wouldn’t be directly affected at all if, for example, there was a ballistic nuclear attack in Ukraine.’

When asked about the French president’s comments at a Nato meeting in Brussels yesterday, Mr Wallace said it ‘reveals President Macron’s hand’.

He added: ‘Our view is if Russia were to use a nuclear weapon, there would be severe consequences for Russia. It would be breaking the 1945 taboo on the use of nuclear weapons. And it would leave him incredibly isolated globally.’

The Telegraph quotes sources at Nato as saying Mr Macron’s words could upset the ‘principles of deterrence’ and that he should not ‘talk about it publicly’. 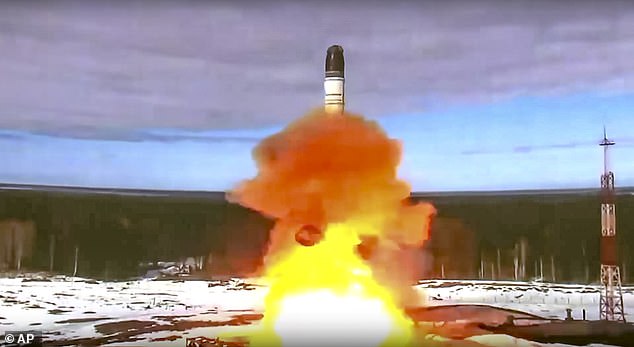 France would not use a nuclear weapon against Russia if it used one of its own atomic weapons against Ukraine, the French President has said (File image: Russian nuclear missile) 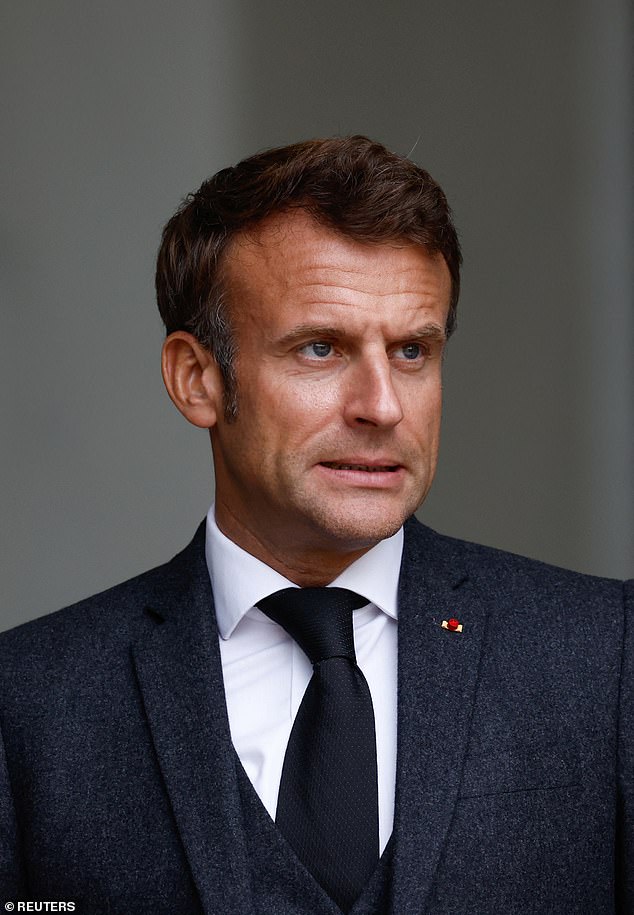 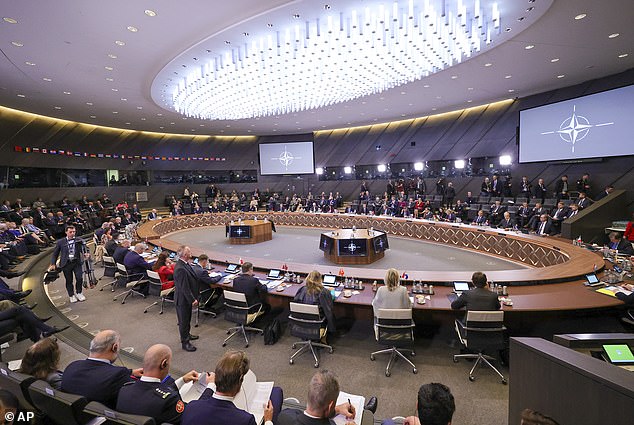 NATO defence ministers meet in Brussels yesterday as they discuss military aid to Ukraine, ahead of a meeting to plan an upcoming nuclear exercise

The day before a senior Nato source said Russia would ‘almost certainly be drawing a physical response from many allies, and potentially from Nato itself’ if it did strike.

Nato Secretary-General Jens Stoltenberg added that there would be ‘severe consequences’ should nuclear weapons be used, but refused to give any details on NATO’s potential response.

Mr Stoltenberg warned Moscow of ‘severe consequences’ should it use any kind of nuclear weapon against Ukraine but declined to give any details on NATO’s potential response.

The NATO chief said a nuclear strike would fundamentally change the nature of the conflict and signify the crossing of a very important line.

Russia has threatened the Third World War if Ukraine is granted membership into NATO, a Russian Security Council official has warned today.

He said this was because the West understood the consequences of Ukrainian membership of NATO – that the fifth ‘collective defence’ article would be triggered.

‘Apparently, that’s what they are counting on – to create informational noise and draw attention to themselves once again,’ Mr Venediktov said.

‘The suicidal nature of such a step is understood by NATO members themselves,’ he added.

‘We must remember: a nuclear conflict will affect absolutely the whole world, not only Russia and the collective West, but every country on this planet,’ Mr Venediktov said.

‘The consequences would be disastrous for all mankind.’

‘Even the use of a smaller nuclear weapon will be a very serious thing and fundamentally changing the nature of the war in Ukraine,’ he noted.

EU foreign policy chief Josep Borrell, speaking in Bruges, warned ‘any nuclear attack against Ukraine will create an answer, not a nuclear answer but such a powerful answer from the military side that the Russian army will be annihilated, and Putin should not be bluffing.’

‘As I look at indications and warnings, I don’t see any need to make any changes to what we’re doing right now,’ he told a news conference.

It comes as dozens of RAF jets and US air force planes have travelled to Europe in preparation for Nato drills to simulate launching nuclear strikes against Russia.

The drills, which are codenamed ‘Steadfast Noon’, will take place next week and will see 60 planes from 14 Nato nations scramble to simulate a nuclear attack on Putin.

Among the aircraft taking part will be F-15 Eagles based at RAF Lakenheath in Suffolk, which can carry nuclear weapons, as well as B-52s which are being flown over from the US.

The annual exercise, which does not involve live bombs, will see RAF Typhoons play the role of Russian MiG jets which would simulate Putin’s defences, The Sun reports.

The drills had been planned before Russia’s illegal invasion of Ukraine in February, with US officials saying it has been held regularly at around this time of year for more than a decade.

Cancelling the drills because of the war in Ukraine would have sent a ‘very wrong signal,’ Mr Stoltenberg said on Tuesday.

The bulk of the simulations will take place more than 1,000km (625 miles) from Russia, the US defence official said.

‘While we will continue routine activities to sustain our (nuclear) deterrent, there will be no special messaging around our exercises,’ the U.S. defence official said.

‘We think nuclear sabre rattling is reckless and irresponsible. Russia may choose to play that game but we won’t.’

The exercise comes as Russia gets set to host its annual Grom exercise, which normally takes place in late October and sees it test its nuclear-capable bombers, submarines and missiles.

Mr Stoltenberg said Nato would monitor Russia’s annual nuclear drills very closely, as it has done for decades, and remain vigilant ‘not least in light of the veiled nuclear threats and the dangerous rhetoric we have seen from the Russian side’.