MPs are set to vote tonight on the Government’s new strikes laws in the wake of disruptive action by rail workers, nurses and ambulance staff.

Rishi Sunak wants to give ministers the power to impose minimum service levels in key public services – such as the NHS, schools and transport networks – during walkouts by unions.

The Prime Minister has argued this will bring Britain into line with other European countries, where minimum service level laws exist, and protect lives by ensuring a basic level of emergency service is always available.

Under the bill, some employees would be required to work during a strike and could be fired if they refuse.

But Labour have accused the Government of ‘threatening nurses with the sack’ with their plans, which have been introduced amid a bitter pay dispute between ministers and unions.

It means Mr Sunak is facing a huge battle to get the legislation through Parliament, with opposition MPs and peers gearing up for a fight over the proposed laws.

The Strikes (Minimum Service Levels) Bill faces its first test in the House of Commons tonight when Business Secretary Grant Shapps attempts to push it to its next parliamentary stage.

He will present the bill for its second reading in front of MPs with a warning that it would be ‘irresponsible’ for opposition parties to ‘put the lives of their constituents at risk’ by blocking the legislation.

Labour have vowed to oppose the bill and any attempts to fast track it through Parliament, while the Liberal Democrats and SNP are also set to vote against the bill’s second reading tonight.

Meanwhile, to coincide with this evening’s debate in the Commons, trade union leaders who have spearheaded recent strikes will stage a demonstration outside Downing Street against the ‘hostile’ legislation. 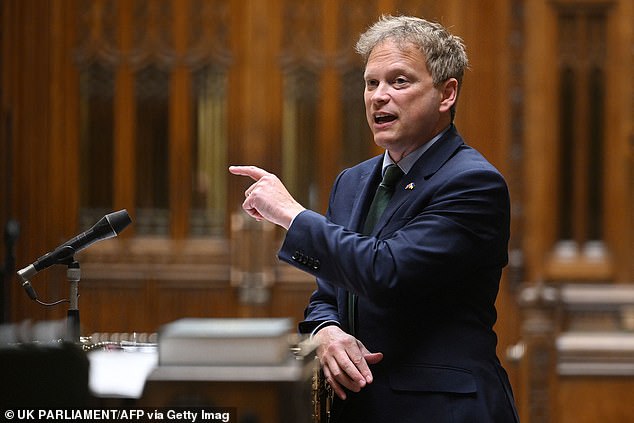 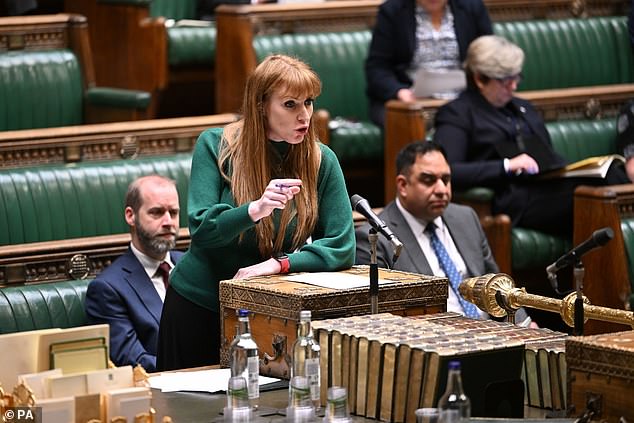 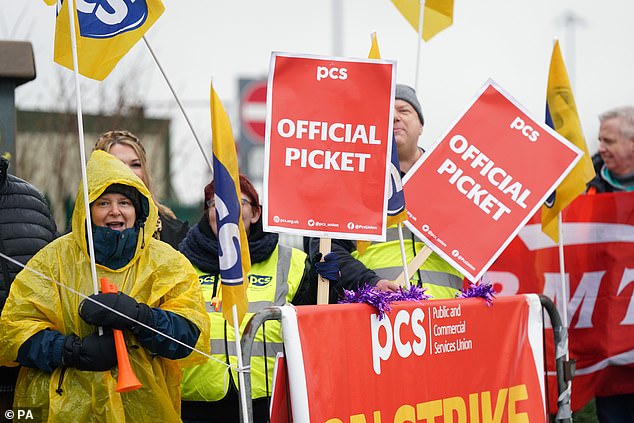 Members of the PCS union, which has recently held a Border Force strike, will stage a protest outside Downing Street this evening

The Strikes (Minimum Service Levels) Bill is part of Mr Sunak’s response to the ongoing ‘winter of discontent’.

Nurses, ambulance drivers, rail workers, and border officials – as well as many other workers – have all brought widespread disruption to Britain with walkouts in recent months.

The bill seeks to give the Government the power to set minimum service levels for NHS, fire, education, transport, nuclear decommissioning and border security services.

It does not set out what minimum service levels should be, or what they should be based on, but gives ministers the power to impose minimums through secondary legislation.

Ahead of tonight’s second reading, Mr Shapps said that while ministers would ‘always protect the right to withdraw labour… this overdue legislation will bring us into line with our European neighbors by providing minimum safety and service levels designed to protect lives and livelihoods’.

‘It is frankly irresponsible for opposition MPs to put the lives of their constituents at risk by voting against this bill today, which is why public polling shows that the public supports our common-sense measure,’ he added.

But Labour deputy leader Angela Rayner accused the Tories of resorting to ‘threatening nurses with the sack because they can’t stomach negotiation’.

She added: ‘Instead of focusing on cleaning up the economic mess they’ve made, Rishi Sunak is lashing out at working people right across Britain today to distract from his weak and divided Government. He’s costing the public dearly.

‘This shoddy, unworkable bill won’t do a thing to help working people or avoid strikes.

‘Labour will be opposing this assault on common sense that would see fundamental British freedoms ripped up in order to distract from the crisis the Tories have inflicted on our country.

‘Instead of getting round the negotiating table to resolve disputes, they’re pouring petrol on the fire.’

The PCS union is encouraging its members to join tonight’s demonstration outside Downing Street with flags, banners and placards.

The union’s general secretary Mark Serwotka said: ‘This bill puts power in the hands of the wrong people.

‘It gives all the power to ministers and employers instead of our members who are being denied their democratic right to strike.

‘It paves the way for workers who have voted for strike action being sacked if they refuse to turn up for work on a strike day.

‘We shall oppose this hostile legislation to protect our members’ rights.’