Bangkok: Anyone who has been to a movie theatre in Thailand knows the routine: Before the film starts, everyone is asked to stand during a royal anthem to pay respect to the monarch.

During the 70-year reign of former King Bhumibol Adulyadej, who died in 2016, it was rare for anyone to sit during the song. And while many Thais still stand up, nowadays more and more people are opting to stay seated rather than pay respect to his son, King Maha Vajiralongkorn, whose short time on the throne has seen unprecedented protests calling for reform of the monarchy. 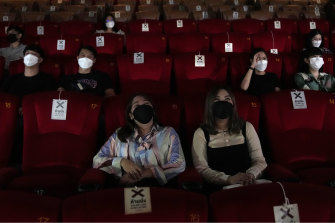 Moviegoers at a theatre in Bangkok, Thailand, where people are increasingly declining to stand when the royal anthem is being played. Credit:AP

At a recent showing of the James Bond film No Time to Die at a central Bangkok theatre, nearly half of about 60 people sat down through the royal anthem without incident – a scene unthinkable just a few years ago, when moviegoers faced risks if they didn’t stand. In 2019, a woman said she was assaulted for not standing up, while last year another man was splashed with a drink for sitting through the 90-second song in the eastern province of Chanthaburi.

“Things are changing,” said Chotisak Onsoong, a political activist who had popcorn and a water bottle thrown at him in 2007 when he sat for the anthem. He was later kicked out of the theatre and charged with insulting the royal family, although prosecutors eventually declined to pursue the case. He still refuses to stand and has noticed more people joining him in recent months.

“Protesting and not standing up for the anthem are really the same thing,” Chotisak said.

Royalist groups have noticed the trend as well. On October 29, a pro-monarchy Facebook group called “Good Students” posted a graphic of one person standing in a cinema before the start of the royal anthem with the caption: “Even if I’m the only one left standing, I’ll continue to stand up.” 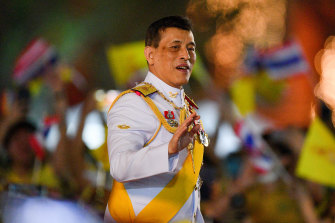 The shift highlights changing attitudes toward the monarchy following more than 15 months of protests – including one of the largest in months on October 31 – calling for Thailand’s most powerful institution to have less taxpayer money and more accountability. While the royalist government hasn’t budged on any of their demands, which broke longstanding taboos in Thailand, political parties that had long avoided issues surrounding the monarchy are now starting to speak up ahead of an election that could come in early 2022.

Pheu Thai, the largest party in parliament and winner of the most seats in every Thai election since 2001, last week joined fellow pro-democracy organisation Move Forward in calling for changes to Thailand’s lese majeste law, which mandates as many as 15 years in jail for insulting Vajiralongkorn and other top royals.

In a sign of the sensitivity, Pheu Thai later clarified that it wouldn’t spearhead the amendment, but would facilitate the discussions in parliament. Since mid-2020 at least 100 people were charged under the law, with the majority of cases stemming from online political comments and participation in the protests.

Prime Minister Prayuth Chan-Ocha, a former army chief who rose up through the Queen’s Guards and led a 2014 coup, has sought to discourage protests while avoiding a violent crackdown that could inflame tensions further. Deputy Premier Wissanu Krea-Ngam said last week that political parties can propose amendments to lese majeste like any other statute in the criminal code, but he noted the “sensitivity” of debating the law. The royal office didn’t immediately respond to requests for comment.

“This is an important issue for national security,” Prayuth told reporters in Bangkok on November 3, when asked about calls to change the lese majeste law. “Please don’t destroy an institution that Thai people across the country respect. Some people may not understand it but hopefully one day they can learn more and understand it.” 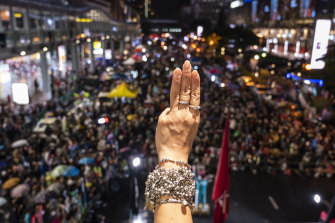 Protesters give the three-finger salute at an anti-government gathering in Bangkok on October 31.Credit:Getty Images

The 69-year-old Vajiralongkorn, also known as Rama X, has spent much of the past year in Thailand in a bid to burnish his image after long stints in Germany in the first few years of his reign. Although the protests have persisted, the monarch has seen his financial prospects improve after legal changes allowed the transfer of assets at his discretion from the Crown Property Bureau, which leases land to many of the country’s top tycoons.

Still, the king’s immense wealth has generated resentment among protesters, who want the assets transferred under the control of the Finance Ministry. Protesters have defaced the king’s portraits in public areas, prompting authorities to cover them up during demonstrations.

Other Thais have sought more creative ways to express discontent with the authorities. Some have worn crop tops similar to those worn by the king, women have protested topless and citizens have largely ignored government requests to wear the symbolic colour yellow on key royal holidays.

“Demonstrators are breaking with a political culture that demands conformity and demands non-confrontation,” said Tamara Loos, a professor of history and Thai studies at Cornell University in Ithaca, New York, who has written several books on Thailand. “They want to expose the social norms that the hierarchy protects, and the king is at the top of that.”

While the government repealed a legal provision in 2010 that made it illegal to sit through the royal anthem, the practice was still considered socially unacceptable until recently. Chotisak noted that more people who aren’t very politically active are choosing to sit because they are no longer afraid of getting attacked by royalists.

“The number of royalists is dwindling by the day,” Chotisak said. “They can’t really convert the younger generation, or they pass away faster than new royalists can take their place. The proportions have changed. It’s different now than it was a decade ago.”