London: Nearly half of all Americans expect another mass shooting will happen soon in the United States, according to a Reuters/Ipsos public opinion poll released on Friday, as the nation reels from rampages in California, Texas and Ohio. 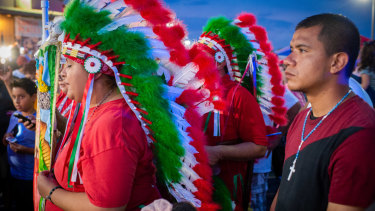 Members of the Apache tribe stand alongside mourners gathered for a vigil at a memorial outside Cielo Vista Walmart in El Paso, Texas.Credit:Bloomberg

The August 7-8 survey found that 78 per cent of Americans said it was likely that such an attack would take place in the next three months, including 49 per cent who said one was “highly likely.” Another 10 per cent said a mass shooting was unlikely in three months and the rest said they did not know.

The poll was conducted after two mass shootings earlier in August in El Paso, Texas, and Dayton, Ohio, and a third in Gilroy, California, last month that left 36 people dead. The attacks have rattled the country and renewed calls for tougher gun laws.

"You are on guard because you never know when it's going to happen and where," said Suzanne Fink, 59, a Republican from Troutman, North Carolina. "It has been happening much too often and it's like a copycat effect."

There is no set definition of a mass shooting, but the nonprofit organisation Gun Violence Archive has tallied more than 250 such incidents so far this year alone – for an average of more than one a day – a widely cited figure that counts events in which four or more people were either shot and killed or shot and wounded.

Former Texas congressman and presidential candidate Beto O'Rourke on Wednesday called the shooting in El Paso "an act of terror inspired by your racism" in response to a tweet by Trump.

The president, who condemned "sinister ideologies" and hate in a televised speech on Monday, has expressed support for tightening background checks for gun purchases.

Republican Senate leader Mitch McConnell said on Thursday he would not call the Senate back early to consider new gun legislation, rejecting a plea from more than 200 US mayors, including two whose cities endured mass shootings last weekend. 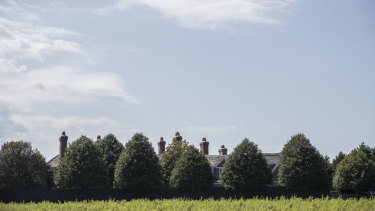 The home of builder Joe Farrell stands in Water Mill, New York. US President Donald Trump’s fundraising swing through the Hamptons has created headaches for some of his high-dollar donors, who face threats of boycotts for supporting a president Democrats say is racist. Credit:Bloomberg

According to the poll, 69 per cent of US adults want "strong" or "moderate" restrictions placed on firearms.

The poll also found that half of all Americans, including two-thirds of Democrats and a third of Republicans, believe that "the way people talk about immigration encourages acts of violence."

A majority of US adults considers "random acts of violence," including mass shootings, to be the biggest threat to their safety, while one in four pointed to politically or religiously motivated domestic terrorism as the biggest safety threat. About one in six cited foreign terrorism.

People cited mental health, racism and bigotry and easy access to firearms as the top three causes of mass shootings in the United States, while only about one in six – and one in four Republicans – said in the poll that video games were to blame.

Walmart said on Friday it has asked employees at its stores across the United States to take down signs and playable demos of violent video games but has made no changes to its policy on selling firearms.

The Reuters/Ipsos poll was conducted online in English throughout the United States. It gathered responses from 1116 adults and has a credibility interval, a measure of precision, of plus or minus 3 percentage points.