This is the shocking moment a bare-chested thug was caught on police bodycam footage going berserk and attacking five officers.

Police were called to a hotel in Nottingham city centre at around 1am on Saturday after a woman was assaulted.

They were confronted by a muscle-bound Daniel Johnson, 39, who became aggressive when police attempted to arrest him.

Officers were punched, kicked and thrown to the ground when Johnson launched a frenzied attack in the hotel corridor.

No one was injured in the attack and Johnson was finally handcuffed. 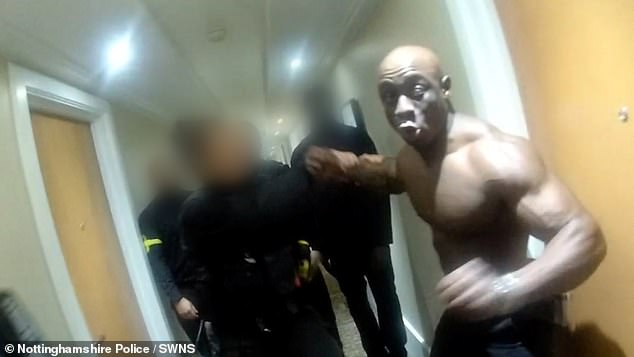 On Monday he was jailed for 12 months at Nottingham Magistrates’ Court. 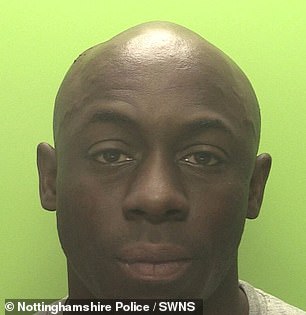 Johnson, 39, of Camden, London, was jailed for 12 months at Nottingham Magistrates’ Court on Monday

Detective Sergeant Lisa Jones, of Nottinghamshire Police, said: ‘This case highlights the sort of violent behaviour our officers have to deal with on a sadly regular basis.

‘I am pleased Johnson has been swiftly dealt with and jailed for his totally unacceptable behaviour.

‘We will not tolerate violence against women or attacks on officers who are simply working to keep the public safe.

‘We do not expect our officers, or any emergency worker, to be assaulted while doing their duty.

‘The force will not hesitate to take action against those suspected of assaulting any emergency worker.

‘Johnson has been jailed within two days of the incident and I hope this sends a clear message that violent offenders will be rapidly and robustly brought to justice.

‘Thankfully, the officers only suffered relatively minor injuries but were understandably extremely shaken by the incident.’