In theory, hiding a pregnancy from family members sounds wildly harsh and selfish, but there’s usually much more to the story when it comes to scenarios like this. Take this Reddit mom, for example — to protect her sanity and peace during a beautiful and delicate period of her life, she purposely chose to keep her pregnancy from certain family members, and Reddit fully understands why she made the dramatic decision.

Concerned that she’s the a—hole, the new mom took to Reddit to explain, “I gave birth to my son 18 weeks ago. My whole pregnancy was kept under wraps for the most part with the exception of my husband’s parents and my sister. Husband’s parents because our son is likely to be their first and only grandchild. My sister because she has always been my support person. The news of me having a baby did not go over well with my dad, his wife, or my half-sister.”

As to why she kept the pregnancy from them, OP wrote, “A few years ago I thought I was pregnant and had miscarried, but the truth was more complicated. I had not been pregnant but had some undiagnosed issues that had made my periods always irregular. I had two positive tests… but an ultrasound had revealed nothing, but did show some other stuff [leading to a diagnosis].”

She continued, “I had been open about the positive test, and when the truth [of the false pregnancy] came out, my dad’s wife was smothering. She told me that was when a girl needed her mom the most and she would not let me push her away like I always had.”

The woman then added a very key piece of information: “She married my dad when my sister and I were young and our mom had died, so she saw herself as filling that mom role, but she was too pushy about it. Even after all I had been through, she would not give me space when I asked for it and my husband had to make her leave our home.”

There’s a lot going on here already that’s giving us insight as to why the new mom was averse to sharing her pregnancy, but it gets more intense. She continued to explain, “The other reason is my sister has two kids. Through both pregnancies, our dad’s wife tormented her with talk of how she’d need her as her mom, [that] she needed to be there for her baby as she was experiencing pregnancy, and talked about how becoming a mom would bond her to her and make her appreciate her in a way she never had before. My sister actually grew to despise her because of it.” 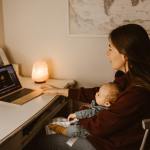 Sounds positively suffocating, even though the stepmom seems to be coming from a good place, so we get why the woman and her sister feel the way they do. Any inkling of sympathy for the stepmother flies out the window with OP’s next revelations, though.

“Neither of us were ever big fans of hers,” she wrote, “but it really made [my sister] despise her because she was so sure she would fully replace our mom by being here for my sister’s pregnancy. [She] even told my sister she was being dramatic when she said she missed mom and hadn’t got the patience for her trying to force her way in. She said, ‘Pregnancy makes women irrational and there’s no reason to miss a ghost.’”

Insensitive, disrespectful, tasteless… These are just a few words that rush into our minds regarding the dad’s wife being so callous about the death of the sisters’ mother, no matter how long ago it occurred. It’s one thing to want to be involved in your stepkid’s pregnancy and an entire other thing when you use their dead mom as a reason for pushing yourself into a space you aren’t wanted in.

The woman continued, explaining, “My sister has not allowed our dad’s wife to be known as grandma to her kids ever since. She had considered allowing it before the pregnancy stuff, but after, the chance was gone and my sister would not hear arguments for it.”

She concluded, “All this led me to keep quiet when I did successfully get pregnant. I actually don’t live super close to my dad anymore, so I just stayed away. I also knew it would hurt their feelings, but I honestly didn’t have it in me to care. My dad was furious, and his wife and my half-sister still send me messages about how cruel and unfair I am and how I robbed them of the excitement and tainted the whole experience. They both said how dad’s wife becoming a grandma for the third time was important, especially given her other grandkids will never call her grandma, and I was selfish to take joy from her. AITA?”

Redditors swiftly assured the OP she is very much not TA in this situation. One user wrote, “You cannot force love or close connections onto people. They either mesh well together or they don’t. Stepparents who try to completely replace a dead parent will almost always fail to make the bonds they are trying to forcefully forge. Far better to always acknowledge the elephant that never leaves the room: ‘I know that I am not X but I am here for you, how can I help you?’ or ‘I know I can never really replace X but I hope we can make a relationship of our own.’”

Another user was even more critical of OP’s dad and his wife, writing, “This woman is not your stepmother; she is merely your dad’s second wife. Sounds like they need an intervention to make it clear that their ‘fantasy’ is NOT real and never going to happen. They are still upset because they believe in their version of their fantasy family and thus think they are being treated unkindly. The only way you will ever get them to back off is to get them to accept reality. As it stands, you are doing the right thing to protect your family and keep the boundary.”

Boundaries were a hot topic in the comments, with another Redditor writing, “Pregnancy is something deeply personal and can be a very sensitive time. You did what you needed to do to protect yourself and keep your sanity. NTA at all. If stepmom and dad don’t understand, they don’t have to. Good for you for keeping those boundaries strong, and please don’t let them guilt or shame you for your decision.”

It seems like the dad, his wife, and the women’s half-sister have some major work to do to become more empathetic, less self-centered people. Until they rise to that point, we’re with the Redditors on this one.