MORE than 1,000 tonnes of oil is feared to have leaked from a ship which ran aground in the honeymoon resort of Mauritius.

The MV Wakashio hit a coral reef off the island nation on July 25 and has been polluting the Indian Ocean ever since. 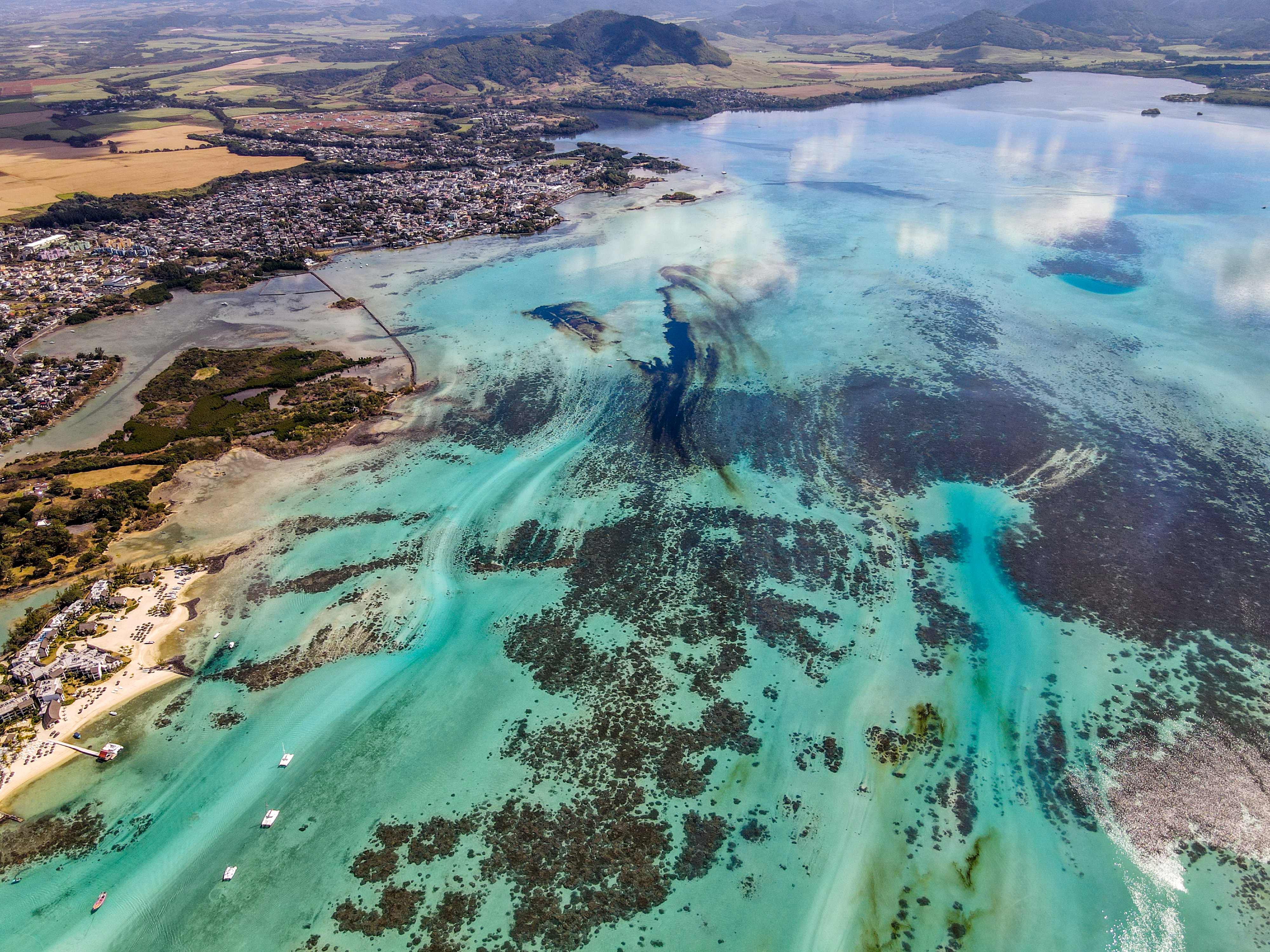 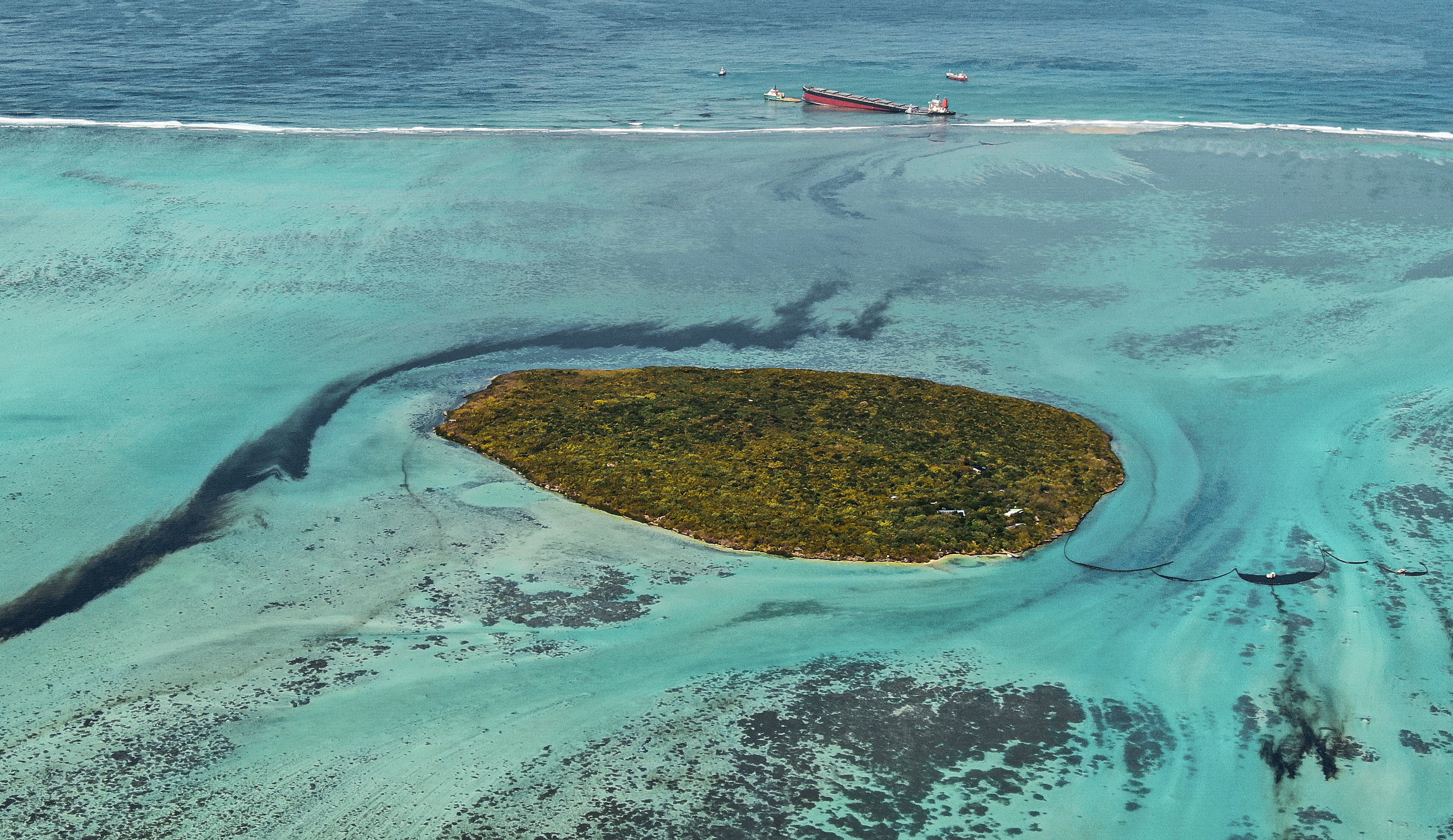 Mauritius has declared a state of "environmental emergency" in the wake of the shocking accident.

Now shocking aerial photographs have revealed the full extent of thespill -which environmentalists are calling an ecological disaster.

They show a dark slick spreading across the turquoise waters near the coast.

As the slick closed in, anxious locals stuffed sacks with leaves to create makeshift barriers.

France revealed it is now sending specialist help from its nearby Reunion island. 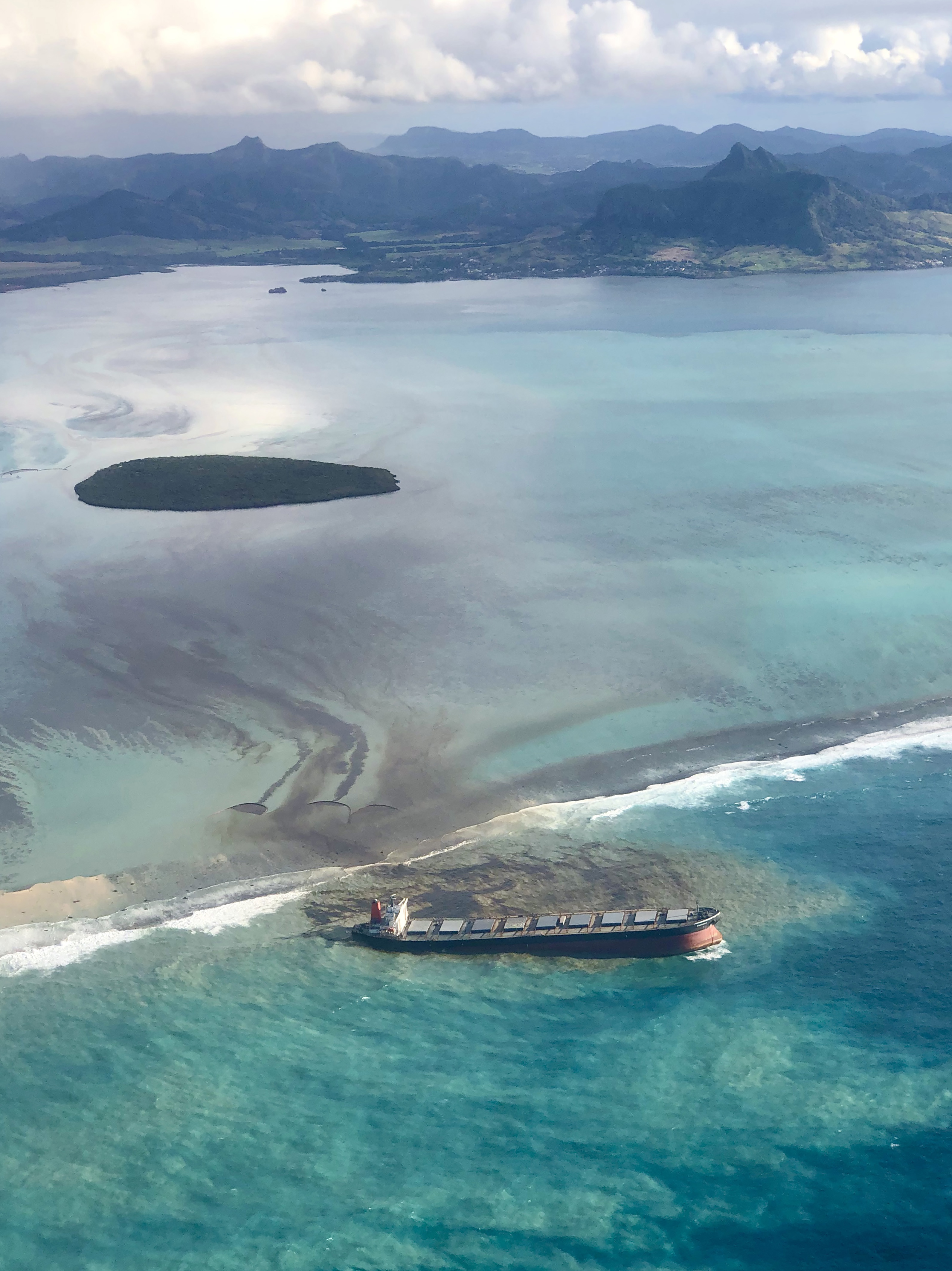 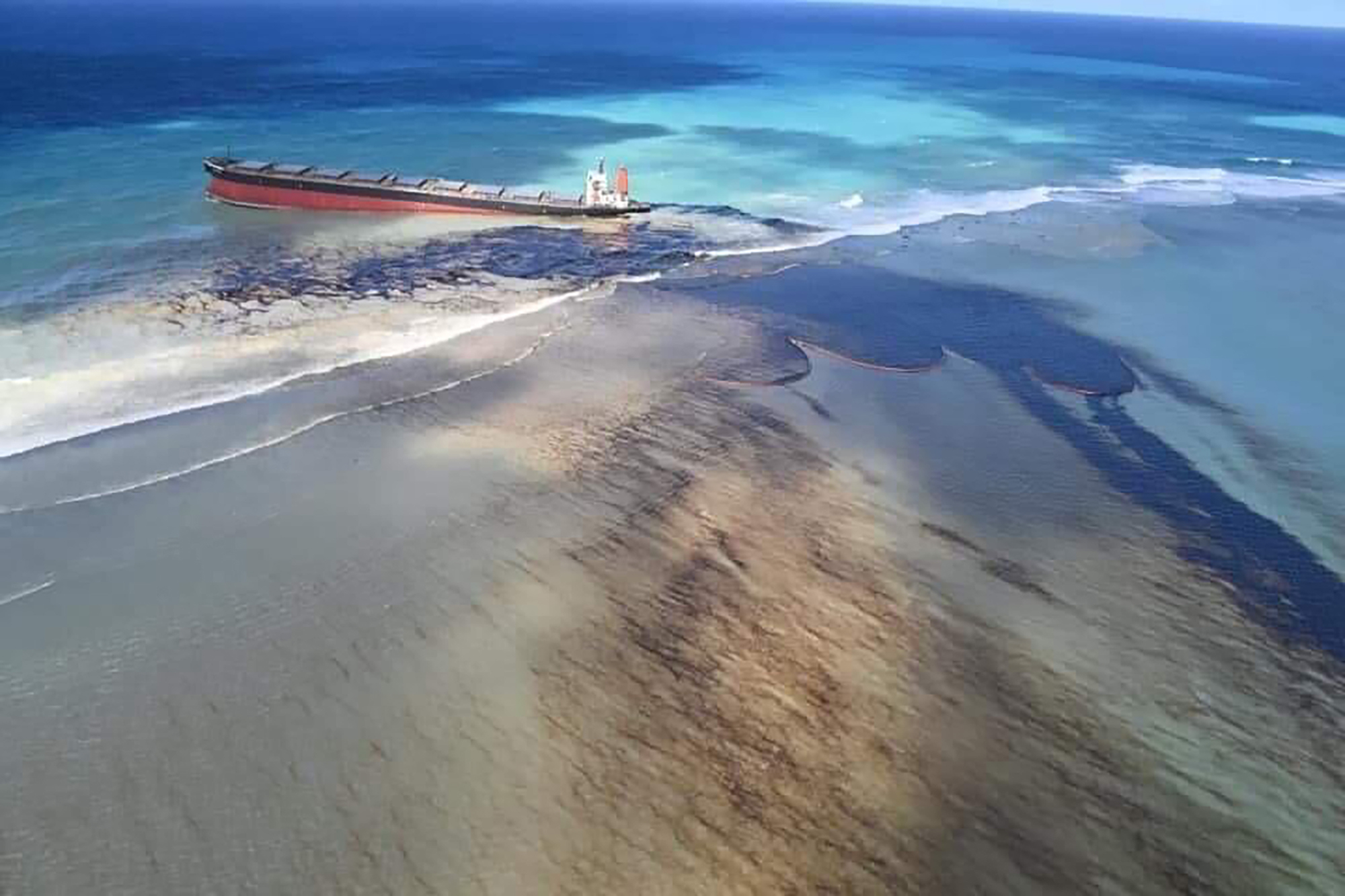 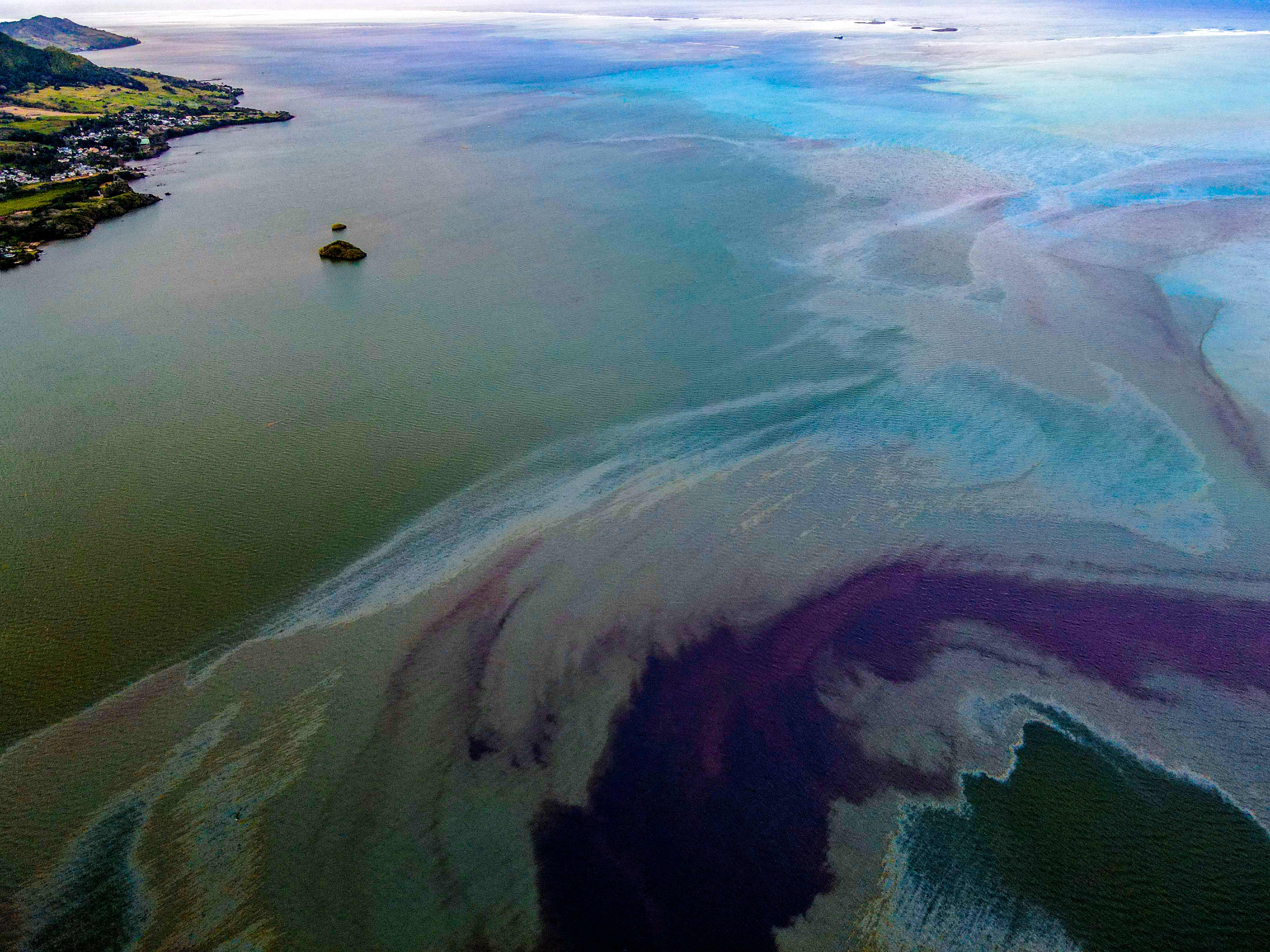 "When biodiversity is in peril, there is urgency to act," French President Emmanuel Macron tweeted on Saturday.

Wildlife volunteers ferried dozens of baby tortoises and rare plants from an island near the area of spill – Ile aux Aigrettes – to the mainland.

Fears are now growing that the worsening weather could tear the Japanese-owned ship apart along its cracked hull.

France said a military transport aircraft was carrying pollution control equipment to Mauritius and a navy vessel with additional material is to set sail for the island.

Locals and environmentalists are now asking why the authorities didn't act more quickly after the ship ran aground more than two weeks ago.

Mauritius says the ship was carrying nearly 4,000 tons of fuel when it became stuck. 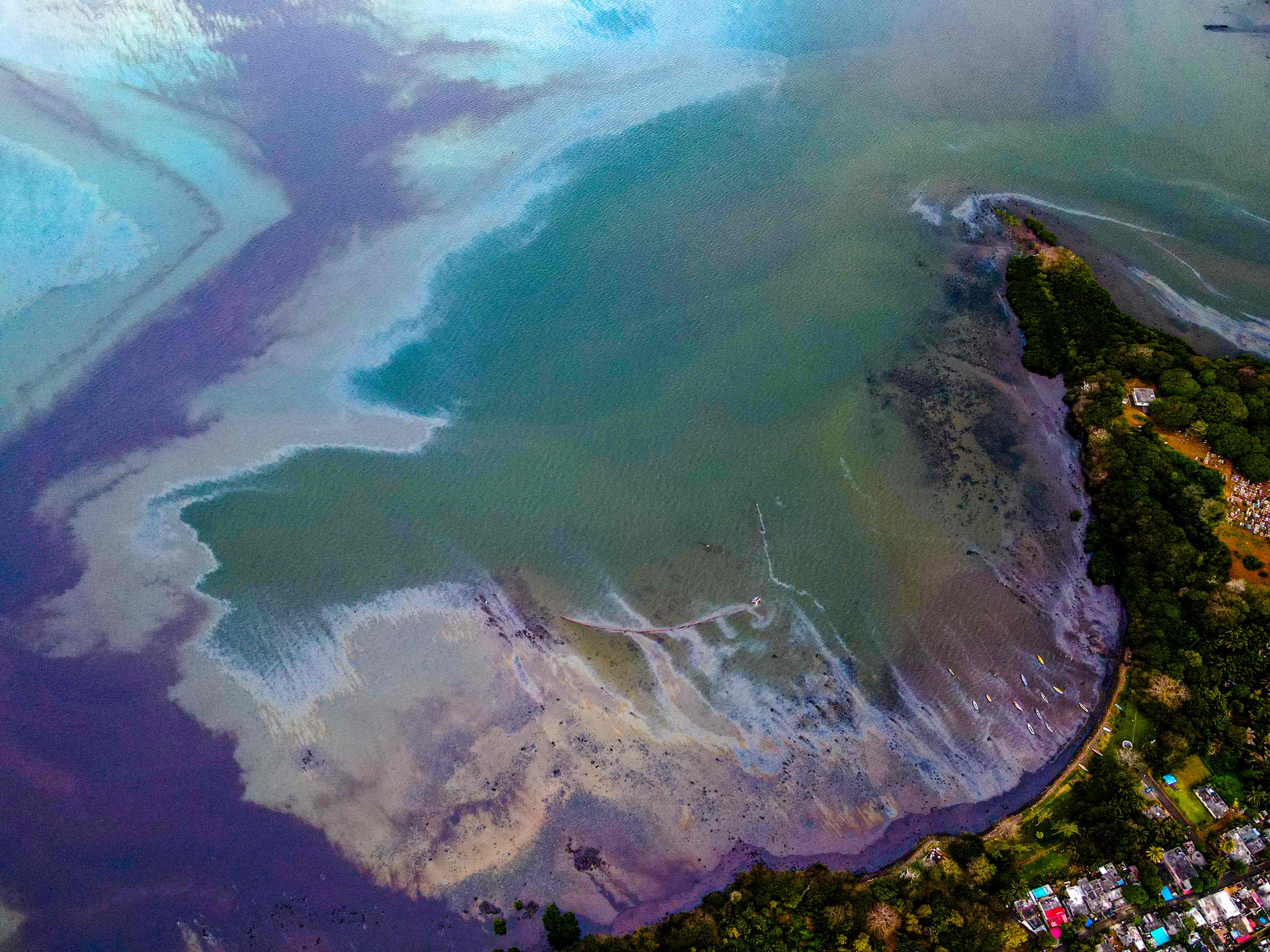 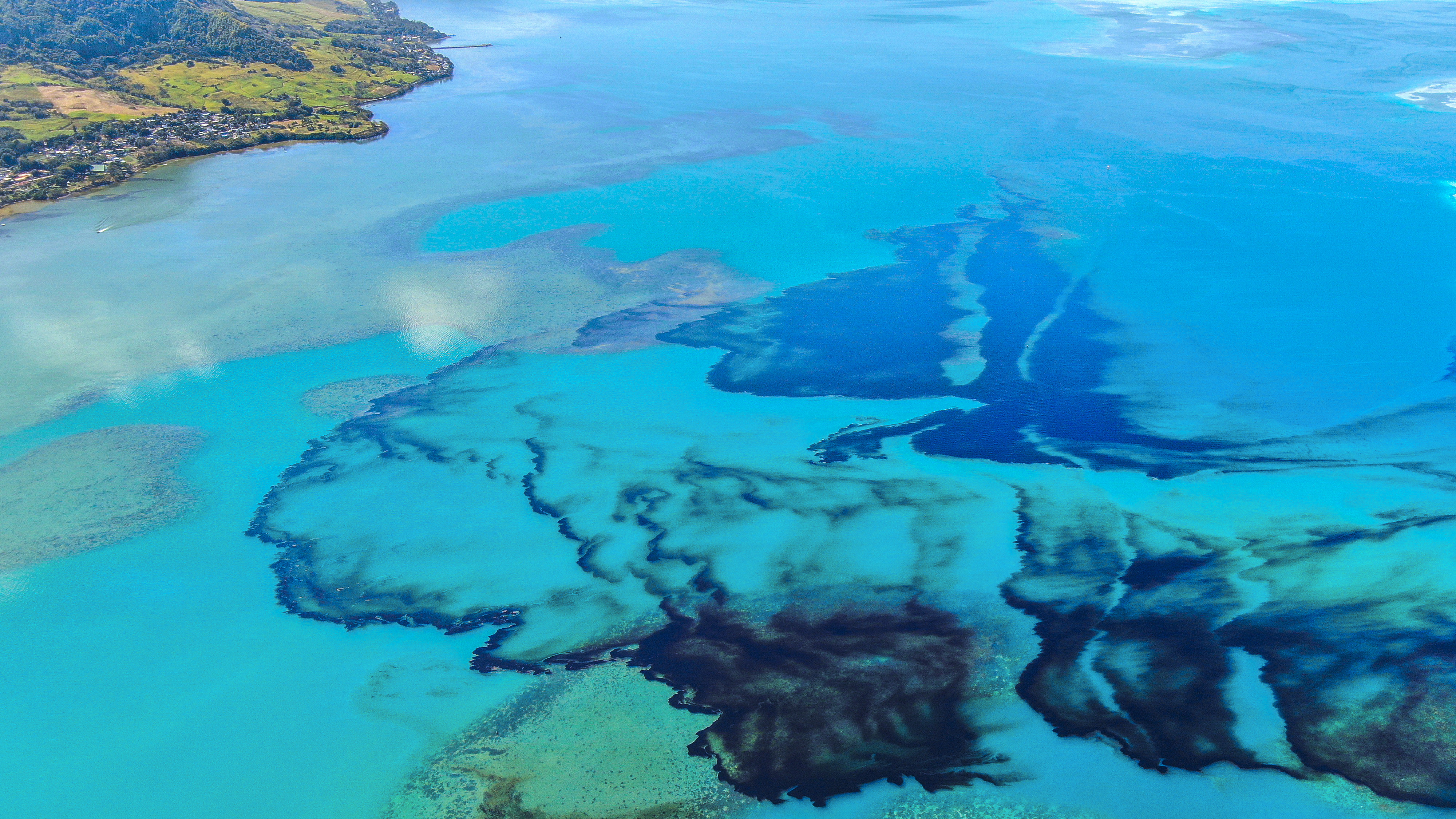 Some 500 tonnes of oil have been salvaged from the ship, but there are still 2,500 tonnes remaining on board.

Cracks in the hull were detected a few days ago and the salvage team was quickly evacuated.

Some 400 sea booms were deployed to contain the spill, but they were not enough.

Prime Minister Pravind Jugnauth says the spill represents a real danger for the country of 1.3 million peoplethat relies heavily on tourism and has been been hit hard by the effects of the coronavirus pandemic.

"Our country doesn't have the skills and expertise to refloat stranded ships," he said Friday. 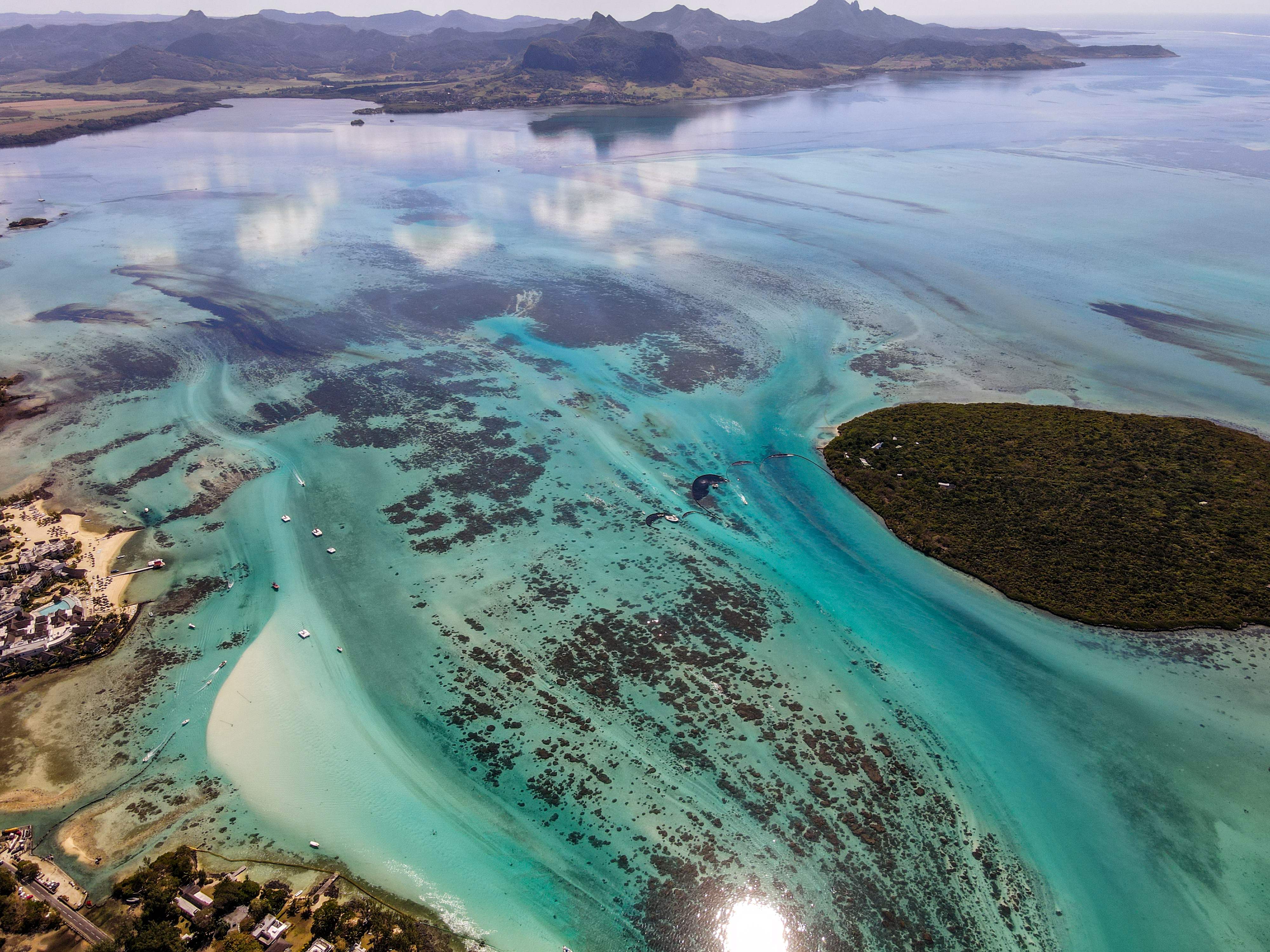 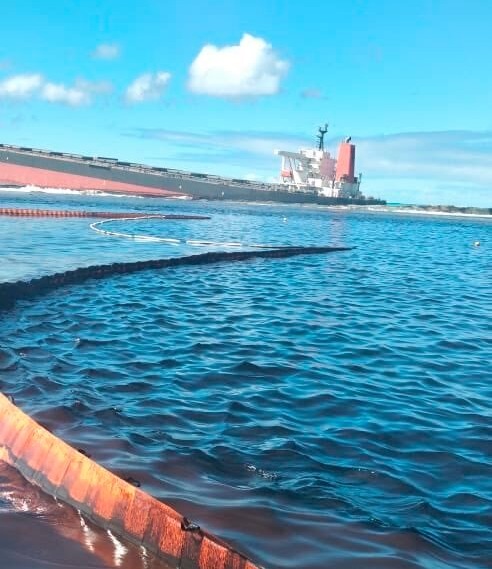 "Bad weather has made it impossible to act, and I worry what could happen Sunday when the weather deteriorates."

Heavy winds are expected to push the oil slick even farther along the mainland's shore.

Greenpeace Africa warned that hundreds of tonnes of diesel and oil has leaked into the water.

Thousands of species around the pristine lagoons of Blue Bay, Pointe dEsny and Mahebourg are at risk of drowning in a sea of pollution, said Greenpeace's climate and energy manager, Happy Khambule. 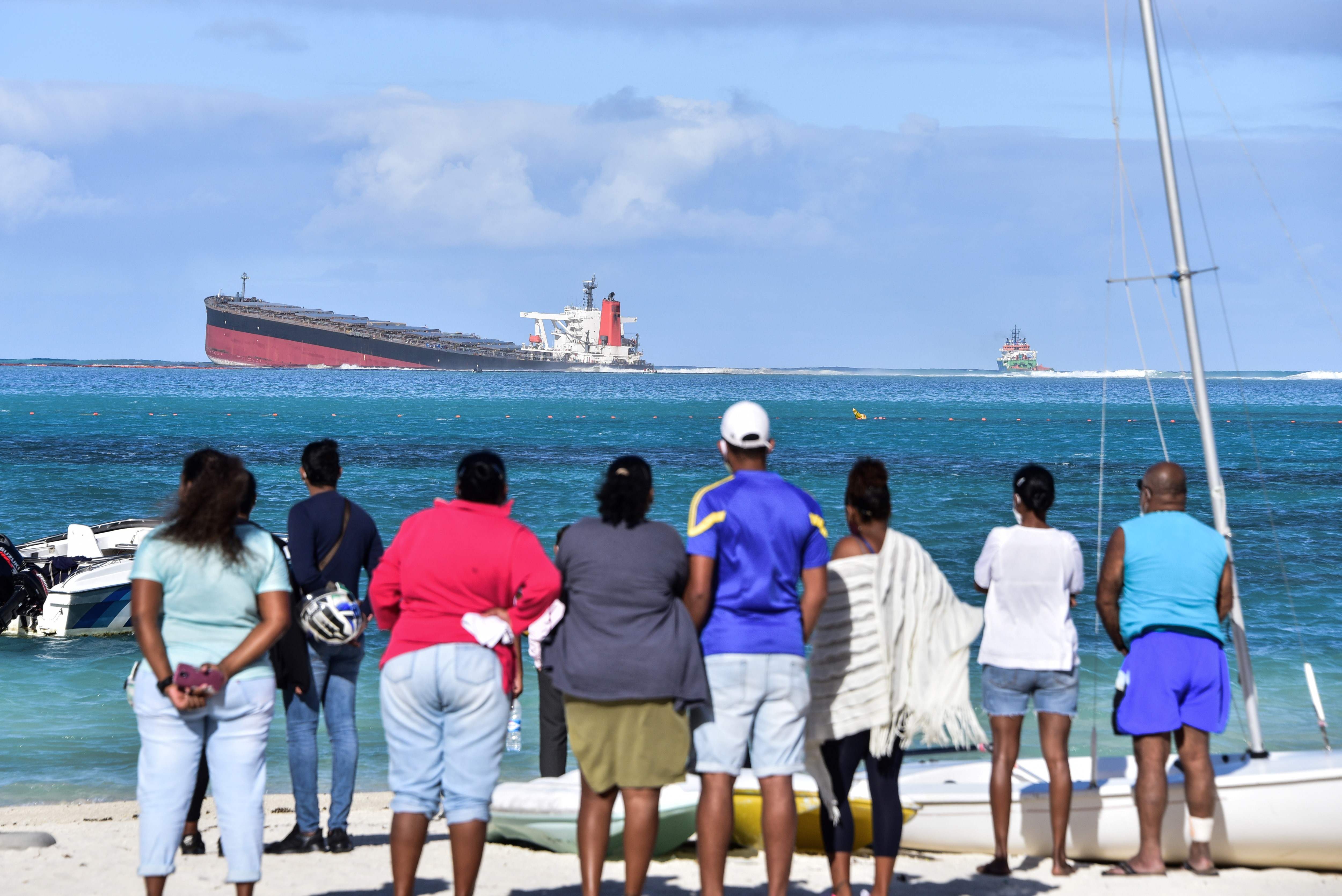 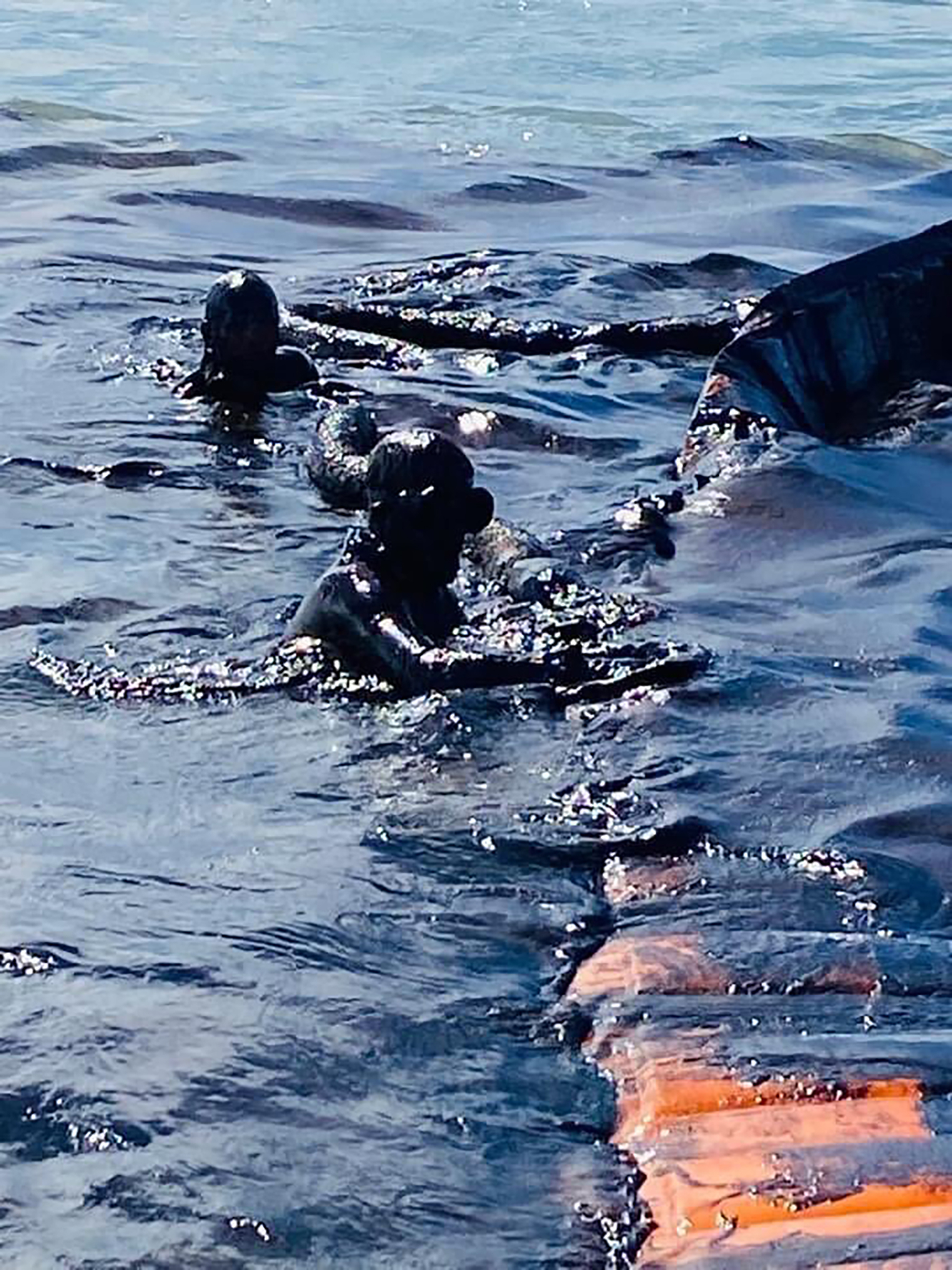 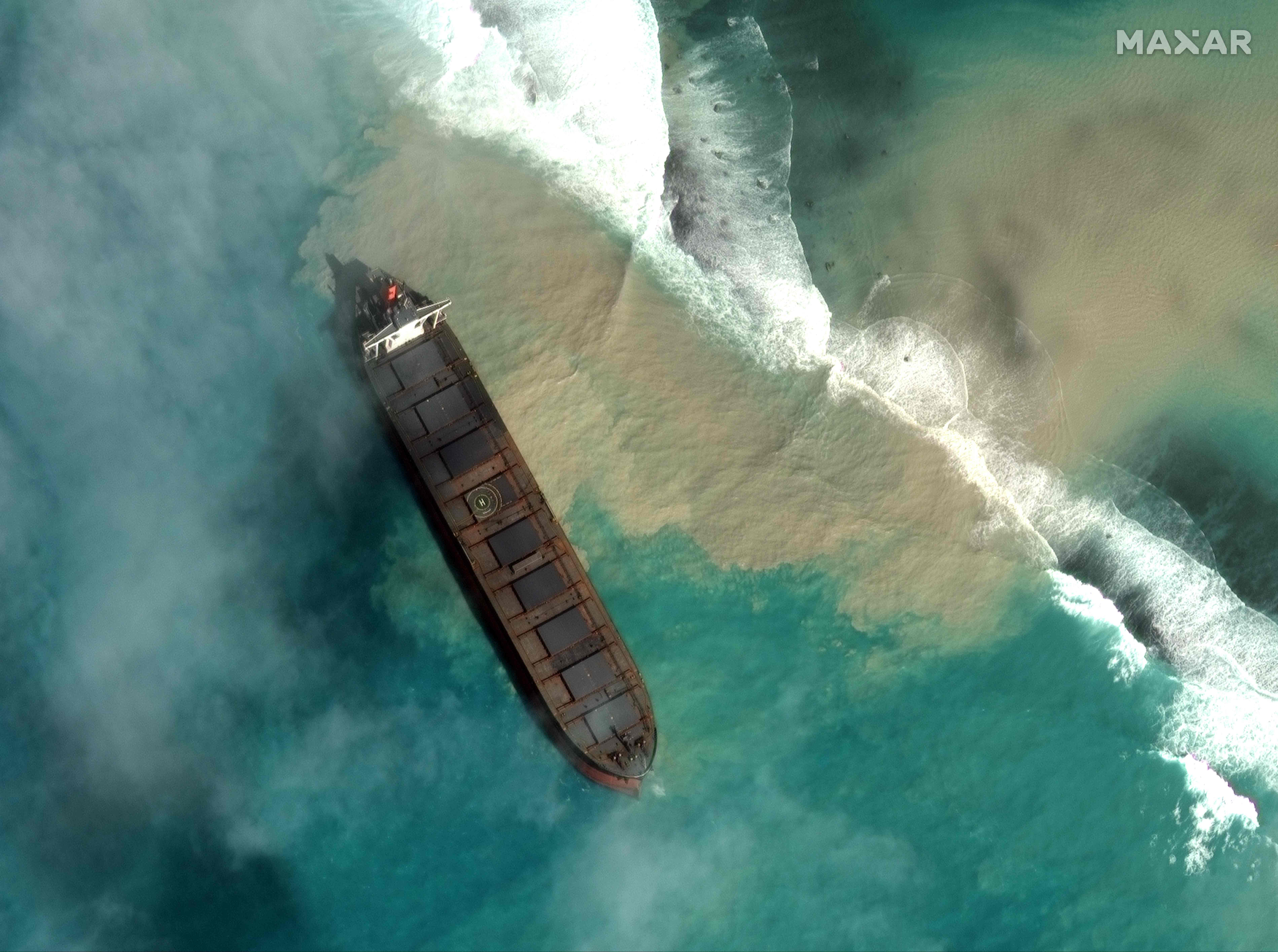 The country also has appealed to the United Nations for urgent aid, including experts in containing oil spills and environmental protection.

A police inquiry has been opened into possible negligence, the government said.

Today the operator of a Japanese bulk carrier apologised for the environmental tragedy.

"We apologise profusely and deeply for the great trouble we have caused," Akihiko Ono, executive vice president of Mitsui OSK Lines said at a new conference in Tokyo.

He added that the company would "do everything in their power to resolve the issue".

At least 1,000 tonnes of oil is estimated to have leaked from the ship onto the waters surrounding Mauritius.

Neither Mitsui OSK Lines nor Nagashiki Shipping, the ship's owner, could confirm the cost of damages from the oil spill.