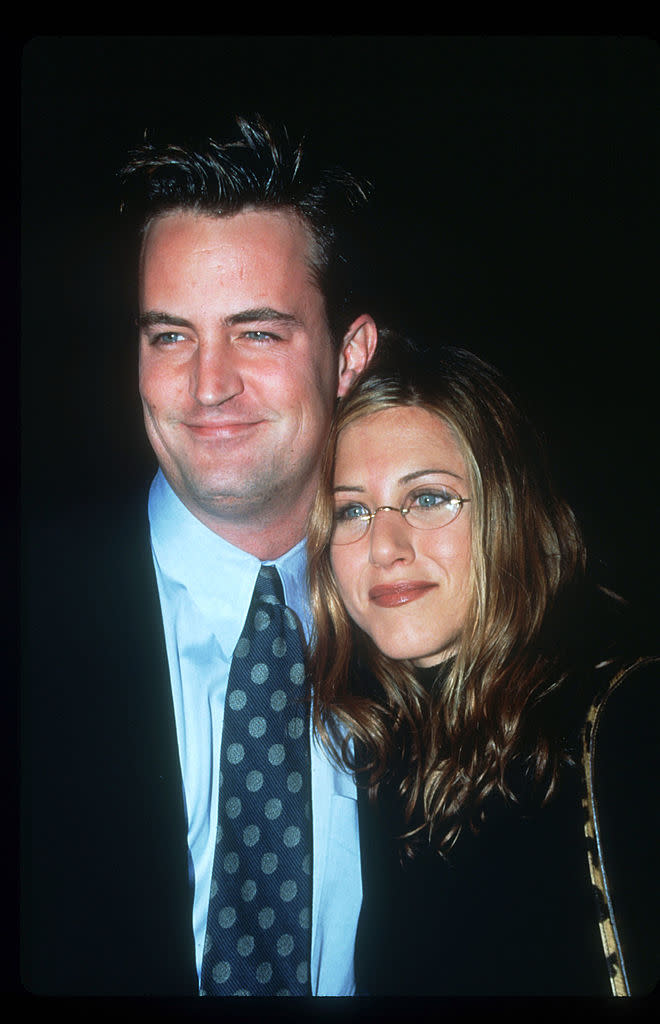 Matthew Perry says his Friends co-star Jennifer Aniston really was there for him when he was struggling with addiction.

In a trailer released Friday of Perry's Oct. 28 sit-down with ABC News journalist Diane Sawyer, Sawyer asks the actor about the time Aniston — whom he calls Jenny — confronted him. She said, as Sawyer puts it, "We know you're drinking."

"Imagine how scary a moment that was," he adds. "She was the one who reached out the most, you know. I'm really grateful to her for that."

The actor, who's struggled with addiction throughout his career, has said that he had a problem with substances even at the height of his career. He writes about his experiences in his new book, Friends, Lovers, and the Big Terrible Thing: A Memoir, which comes out Nov. 1.

Perry told People this week that his alcoholism was just beginning when he was cast as Chandler Bing on the phenomenally popular sitcom. As he explained to the magazine, things escalated and, four years ago, he nearly died. While he told the public that he was being treated for a gastrointestinal perforation, the truth was that his colon had burst from using opioids. Perry was in the hospital for five months — two weeks of which he was in a coma — and wore a colostomy bag for nine months.

In the new clip, he tells Sawyer that he also was once taking "55 Vicodin a day," as well as several substances that she lists: Methadone, Xanax and a full quart of vodka.

"At the time I should have been the toast of the town," Perry says. "I was in a dark room meeting nothing but drug dealers and completely alone."

Perry noted to People, however, that his co-stars in the Friends cast — Aniston, Courteney Cox, Matt LeBlanc, Lisa Kudrow and David Schwimmer — were all supportive, "understanding" and "patient."

"It's like penguins," Perry said. "Penguins, in nature, when one is sick, or when one is very injured, the other penguins surround it and prop it up. They walk around it until that penguin can walk on its own. That's kind of what the cast did for me."

He's said that he's sober now, and declined to say how long that had been the case. But he does count the days.

"It's important, but if you lose your sobriety, it doesn't mean you lose all that time and education. Your sober date changes, but that's all that changes," he said. "You know everything you knew before, as long as you were able to fight your way back without dying, you learn a lot."