The revelation that Opposition Leader Matthew Guy’s chief of staff requested a donor make more than $100,000 in payments to his private marketing business, in addition to his taxpayer-funded salary, managed to shock many Victorians who were accustomed to regular integrity lapses.

Leaked documents reported in The Age uncovered a proposed contract that would have required the donor to pay $8333 a month to Mitch Catlin’s private marketing company for services described as “supporting business interests”. 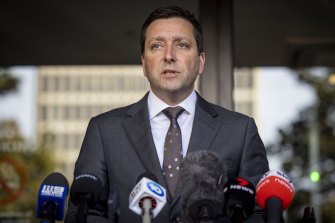 Matthew Guy speaks to the media on Tuesday.Credit:Wayne Taylor

Coming just two weeks after the publication of a report from Operation Watts – a joint investigation by IBAC and the Ombudsman, which found within the Andrews government “rampant nepotism” and “attempts to interfere with government grants to favour factionally aligned community organisations” – this latest disclosure highlights the reality that lapses of integrity are a significant issue across party lines in Victoria.

Catlin resigned shortly after the publication of the story. Guy pointed out that the contract was never signed and that he never forwarded it to the Liberal donor. In his words: “We didn’t do this. We didn’t agree to this. Nothing was signed. There was nothing signed.” He seemed to think this cleared the issue up entirely, and told his party room the resignation would allow the party to move on and continue prosecuting the Andrews government on its own integrity issues. He is kidding himself.

At no stage has Guy attempted to explain the background or the purpose of the contract. At no stage has he outlined why, if Catlin needed to resign, this had become necessary only after The Age reported the story? If integrity matters now, why did it not matter when Guy became aware of the scheme? At no stage has he taken responsibility for what was potentially a means of supplementing his chief of staff’s wage. If Guy meant what he said this week when he declared “I value integrity”, then he needs to do some explaining.

Instead, using the cover of the possible external investigations into these matters, he is refusing to answer any questions – a trick borrowed from the Daniel Andrews playbook. There is nothing preventing Guy answering questions now, and he must do so.

How does Guy expect to be taken seriously on matters of integrity if he and his chief of staff were willing to consider an arrangement of this nature, bypassing integrity and transparency rules, even though it did not ultimately go ahead? On the face of it, this seems either an attempt to circumvent the cap on donations from individual donors and the transparency of donations, or to top up the publicly funded salary of Catlin by allowing him to “moonlight” on the side by providing unspecified “services” via his private company?

The last federal election showed that voters care about integrity. It cannot be treated by political leaders simply as window dressing and then weaponised for use against opponents.

According to The Age’s state political editor, Annika Smethurst, many of Guy’s colleagues have questioned his judgment during his career on Spring Street, from botched planning decisions on Phillip Island to his decision to remain at a dinner with an alleged mafia boss in what is commonly referred to as the “lobster with a mobster” meeting.

They have good reason to be concerned. The time for Guy to answer those concerns is now.

Gay Alcorn sends an exclusive newsletter to subscribers each week. Sign up to receive her Note from the Editor.