A Chinese man who stabbed two people to death at a coronavirus travel checkpoint was executed on Thursday, the Supreme People’s Court has revealed.

Ma Jianguo’s execution is believed to be the first carried out for an epidemic-related offence.

Jianguo had been driving a small van with friends to a village in rural Yunnan in February for a karaoke party when he encountered a barricade blocking his path.

The local authority had set up the barricade to control passing vehicles the day before. 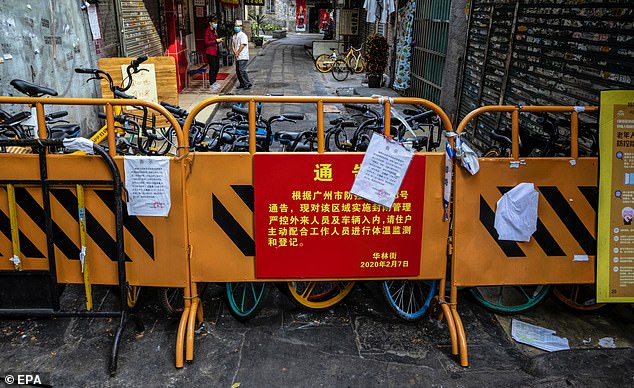 The 24-year-old criminal, named Ma Jianguo, has been executed after stabbing the pair with a folding knife when they prevented him and his companion from passing a blockade with their van. The file photo above shows a road blockade made mostly of bicycles in Guangzhou

The passenger, Ma Kelong, tried to remove the barrier which sparked a dispute with the officials manning it.

One official, Zhang Guizhou, then tried to film Kelong with his mobile phone at which point Jianguo became enraged.

He then took out a folding knife and repeatedly stabbed Guizhou in the abdomen.

As Li Minguo, another official, rushed over to intervene, Jianguo stabbed him in the abdomen multiple times.

The Yunnan Province found Ma guilty of intentional homicide in March and sentenced him to death.

At the time of trial the court said that Jianguo had been imprisoned for intentionally causing injuries to others and released from prison less than five years before.

Although Jianguo admitted his guilt, his subjectivity was ‘extremely evil’, the details of his crime were horrendous and the consequences of the case were ‘particularly serious’, the court explained of its ruling.

When the February murders took place, tens of millions of Chinese were under complete lockdown at home as the country grappled with a worsening coronavirus outbreak. 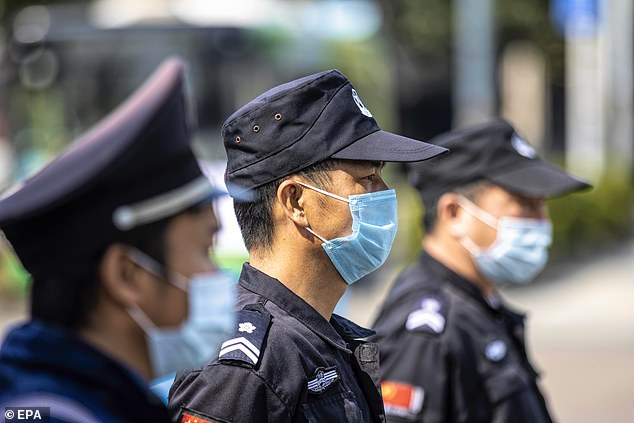 Two local government officials were stabbed to death by the criminal, named Ma Jianguo, after filming his companion removing the obstacles. The file photo shows police and medical workers stopping vehicles on the highway road blockade in Guangzhou on February 18

Since the coronavirus epidemic erupted late last year in the central city of Wuhan, China has charged hundreds of people with offences related to the crisis.

They include spreading ‘rumours’ about the contagion, concealing an infection, and not complying with epidemic prevention guidelines.

In Beijing alone, 113 people have been charged with epidemic-related crimes since a fresh outbreak emerged in early June, officials said this week.

This includes Wuhan doctor Li Wenliang, who alerted colleagues to the virus in late December but was reprimanded by local authorities along with seven others.

Li later died of the disease.