Man who lost six relatives including his mother, sister and three-year-old niece in Grenfell fire got no help from police as he searched for them at 11 hospitals and was forced to wait weeks to find out they had died, inquiry hears

A man who lost six relatives including his mother, sister and three-year-old niece in the Grenfell fire received no help from police as he searched for them at 11 hospitals and was forced to wait week to find out if they had died, an inquiry has heard.

Hisam Choucair has recalled being ‘taken from trauma to trauma’ during a desperate search for his family on the day of the blaze on June 14, 2017.

He told the Grenfell Tower Inquiry that he waited ‘weeks’ for his family, including his youngest niece, Zainab, who was just three years old, to be formally identified as having perished in the fire.

On the day of the fire, Mr Choucair lost his mother, Sirria, his sister Nadia and her husband Bassem Choukair, along with their young children Mierna, Fatima and Zainab, who all lived on the 22nd floor.

Mr Choucair recalled his experience – from rushing to the tower at 3am with his wife, Kona, and their young children in a buggy, his brother, Nabil, and sister, Sawsan – to pulling back curtains at intensive care units in hospitals which could not confirm whether their relatives had been admitted.

Giving evidence calmly despite the trauma, Mr Choucair added that he felt stripped of his dignity after appealing to passers-by in the street with photographs of his missing relatives as a last resort.

Mr Choucair said he initially asked police officers for information at Grenfell Tower, but there were no officials from the council or Government around to help families ‘in any way shape or form’. 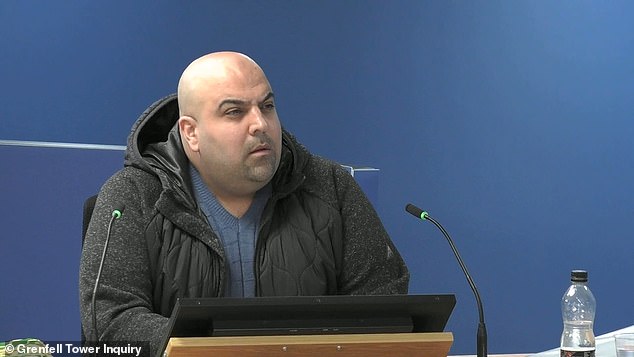 Hisam Choucair (Pictured) has recalled being ‘taken from trauma to trauma’ during a desperate search for his family on the day of the blaze on June 14, 2017 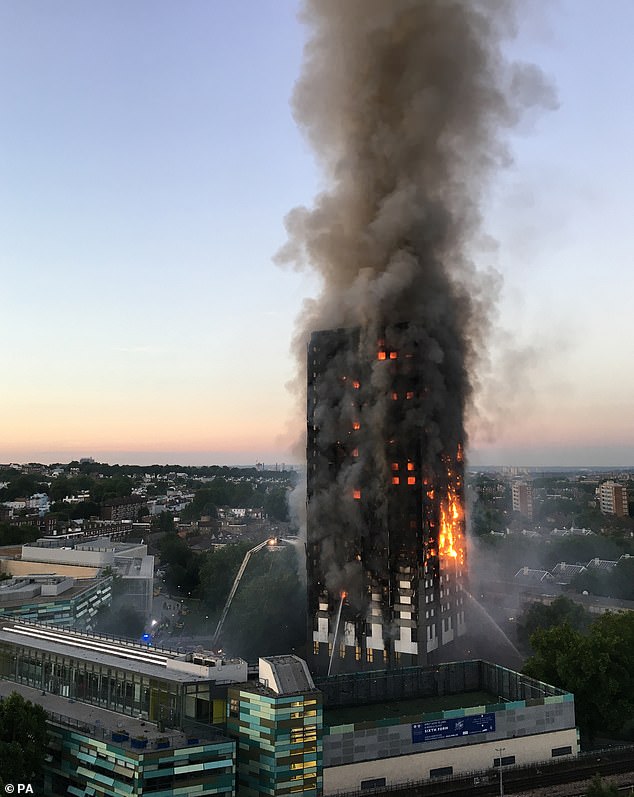 On the day of the fire in 2017 (pictured), Mr Choucair lost his mother, Sirria, his sister Nadia and her husband Bassem Choukair, along with their young children Mierna, Fatima and Zainab, who all lived on the 22nd floor. 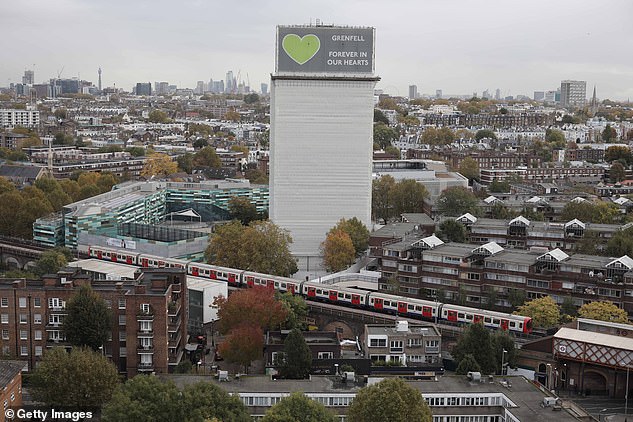 A view of the remains of Grenfell Tower, now covered in hoardings following a huge fire in June 2017 that resulted in the deaths of 72 people

He added that his eyes were stinging from the smoke, he could taste burning plastic in the air, and his children were crying.

Mr Choucair, who was born in the central London borough of Kensington and Chelsea and still lives there, said he tried calling a police helpline which had been set up on the day, but no one picked up.

‘To get that response was shocking – it was the last thing we needed,’

Mr Choucair said he became angry after most of the hospitals could not tell him whether his family had been admitted due to data protection laws.

‘It was as if we were being taken from trauma to trauma. It was as if the inside of your gut was being ripped up.’ 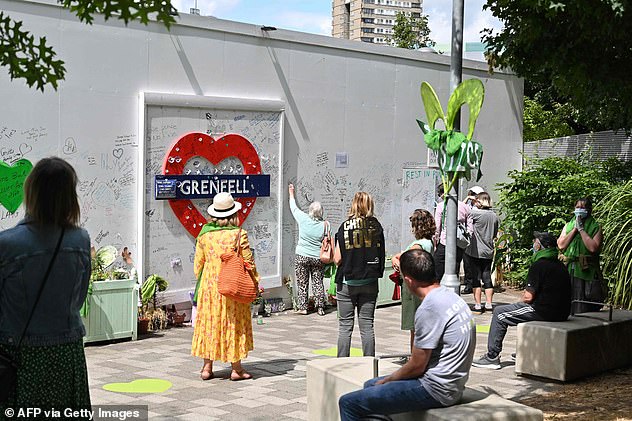 When asked when he found out that his relatives had died in the fire, Mr Choucair said: ‘I can’t pinpoint an exact time.

‘I recall, I just burst into tears, because I felt like our hopes of finding our family were being reduced more and more.’

Mr Choucair also searched impromptu ‘rescue centres’ at venues in Kensington and spoke with Sky News in the hope that someone with information about his family would be watching.

When asked whether he felt like the responsibility of finding his family rested on his shoulders, Mr Choucair said: ‘That’s correct.

‘It didn’t help when we were hearing that other rescue centres and private hospitals were opening up. 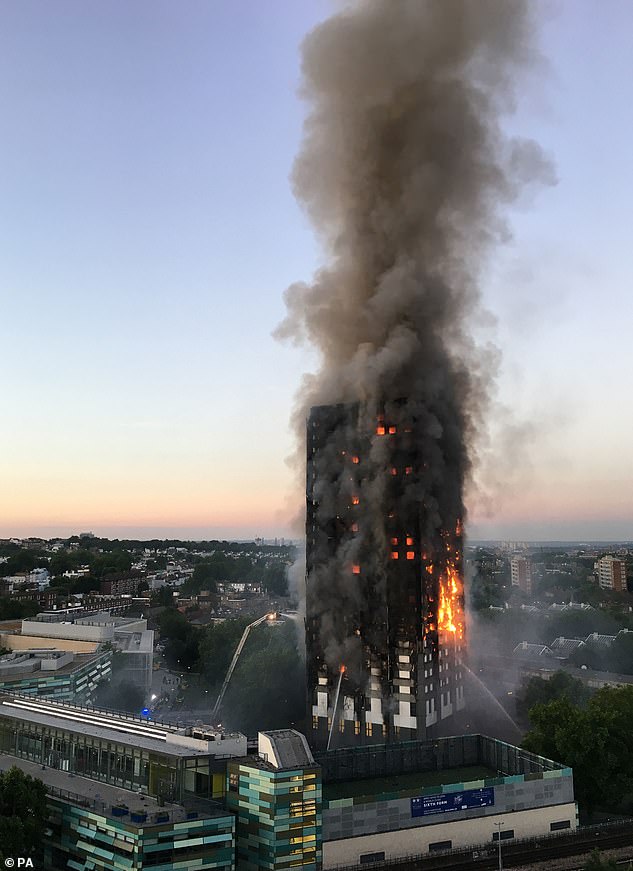 ‘It made life more difficult for us.

‘It caused stress on us, and it didn’t feel as if we were in control of our situation.’

Mr Choucair worked at Transport for London (TfL) during the time of the 7/7 bombings in 2005, and when comparing the response to that incident with the Grenfell response, he said the latter was hampered by racism.

When asked what he hoped would be achieved by the inquiry, he said: ‘To maybe look into the issue of racism – the lack of urgency because of people’s ethnic background and culture, which I don’t believe this inquiry has touched to the extent that it should.

‘I don’t think I could sum up what everyone had to go through on that day but it was the most painful experience in my life that won’t go, no matter how much counselling or support I receive, myself and my family.’

He added that the capital also desperately needs a ‘resilience centre’ which would coordinate emergency responses to major incidents in future and ensure families do not endure the same ordeal as his own.

The failures that meant lives were needlessly sacrificed: Litany of shortcomings led to 72 deaths in Grenfell horror

The London Fire Brigade was plagued with ‘institutional failures’ and its preparation for a Grenfell-style inferno was ‘gravely inadequate’, the retired judge found in 2019.

But he also ruled the tower’s cladding panels broke building regulations and actively helped spread the blaze. Among his findings:

How the blaze started 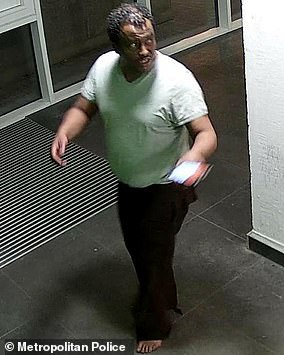 The Grenfell tragedy started with an electrical fault in the fridge-freezer of Flat 16, occupied by Behailu Kebede, pictured here leaving his flat on the day of the fire. The report said that Kebede was not responsible for what followed

The Grenfell tragedy started with an electrical fault in the fridge-freezer of Flat 16, but its occupant Behailu Kebede was not to blame, the report says.

Sir Martin said it was more important to establish ‘how the failure of a common domestic appliance could have such disastrous consequences’.

The firefighters who repeatedly ran into the burning building were praised for their ‘extraordinary bravery and selfless devotion to duty’.

But they were let down by having no training for a fire of such magnitude.

Sir Martin said: ‘The London Fire Brigade’s preparation and planning for a fire such as that at Grenfell Tower was gravely inadequate.’ Officers were faced ‘with a situation for which they had not properly been prepared’, and commanders had ‘no training’ on the dangers associated with combustible cladding.

Nor did they have any training on how to recognise the need for an evacuation of a high-rise block – let alone mount one. Sir Martin said there was simply ‘no contingency plan’ for evacuation.

The fire service’s database on large London buildings was ‘many years out of date’ and contained ‘almost no information of use’. 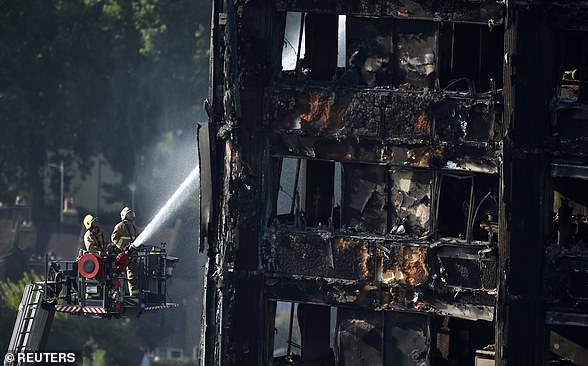 Firefighters spray water onto the Grenfell Tower block which was destroyed in a disastrous fire, in north Kensington, West London, Britain June 16, 2017 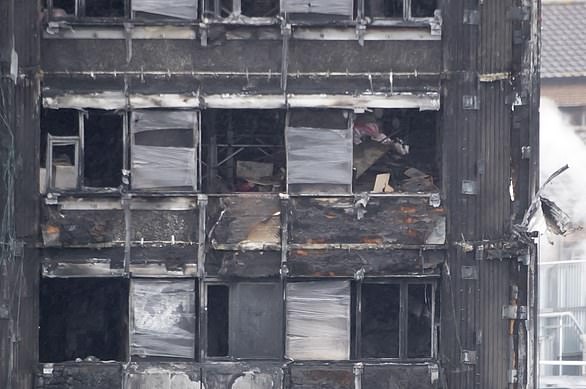 There was a catastrophic failure of ‘compartmentation’ – the safety design that supposedly stops fires spreading from flat to flat.

Had compartmentation worked, it would have contained the blaze in the first flat until firefighters could put it out, enabling occupants elsewhere to ‘stay put’.

The ‘rapid’ failure of compartmentation meant the intensity of the heat shattered glass windows. Kitchen extractor fans were deformed and dislodged, giving the flames a deadly pathway. Fire doors at the front of flats failed in their job, filling lobbies with smoke.

Lives were probably lost because crews and 999 operators wasted ‘the best part of an hour’ telling the block’s occupants to ‘stay put’ in their flats – before realising the blaze was wildly out of control, the report said.

Incident commanders failed to recognise that compartmentation had failed and a full evacuation may have been necessary. They never gained control.

Sir Martin said of the stay-put strategy: ‘Once it was clear that the fire was out of control and that compartmentation had failed, a decision should have been taken to organise the evacuation.

That decision should have been made between 1.30am and 1.50am and would be likely to have resulted in fewer fatalities.’

He said ‘the best part of an hour was lost’ before the stay-put advice was revoked at 2.47am. 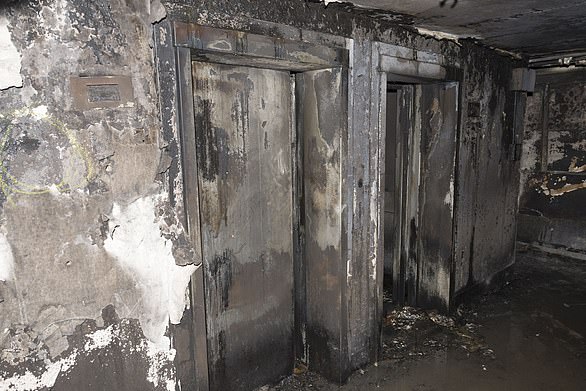 Pictured are the ashened lifts inside the Grenfell tower

Many physical and electronic communication systems did not work properly on the night of the fire. Information sharing between the control room and the commanders on the ground was ‘improvised, uncertain and prone to error’.

Crucial information about the spread and extent of the fire was not shared by senior officers at the scene – and they were not kept abreast of vital information that was coming in to the 999 centre from stricken residents.

Control room operators were in the ‘invidious’ position of being outnumbered by an unprecedented number of 999 calls on the night and ‘responded with great courage and dedication in the most harrowing of circumstances’, said Sir Martin. 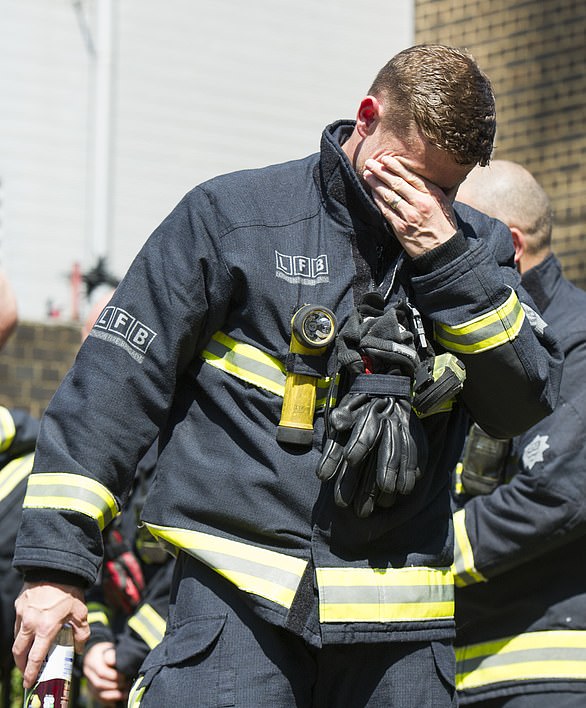 Emotional Kensington firemen join bereaved family members including the parents and sister of Jessica Urbano, at the tribute wall near to Grenfell Tower in West London for a minutes’ silence

Control room staff ‘undoubtedly saved lives’, but their operation was beset by ‘shortcomings in practice, policy and training’. Call handlers did not always obtain necessary details from those inside Grenfell, such as their flat numbers. Others did not know when to tell residents to evacuate.

Mistakes at a similar blaze were repeated

Damningly, the report says lessons had not been learnt from the Lakanal House fire of 2009. Three women and three children died in that high-rise blaze in Camberwell, South London which bore many similar traits.

Sir Martin said: ‘Mistakes made in responding to the Lakanal House fire were repeated.’

He said 999 operators were ‘not aware of the danger of assuming that crews would always reach callers’.

The tower’s outside walls failed to comply with building regulations. There was ‘compelling evidence’ that the walls did not ‘adequately resist the spread of fire – on the contrary, they actively promoted it.’

Outgoing fire chief Dany Cotton was criticised for her evidence to the inquiry in September last year. Sir Martin suggested her attitude meant the brigade was at risk of failing to learn the lessons from Grenfell.

He also highlighted her apparent lack of curiosity on arriving at the scene when told the stay-put advice had been abandoned.

Sir Martin wrote: ‘Quite apart from its remarkable insensitivity to the families of the deceased and to those who escaped from their burning homes with their lives, the Commissioner’s evidence that she would not change anything about the response, even with hindsight, only serves to demonstrate that the LFB is an institution at risk of not learning the lessons of the fire.’