Standard class train ticket holders should be allowed to use first class carriages in northern England until services improve, according to Greater Manchester Mayor Andy Burnham.

The Labour mayor said he ‘can’t see a justification’ for only permitting passengers with more expensive tickets to use the compartments when people are being forced to stand for entire journeys.

Mr Burnham claims northern cities were ‘promised an expanded timetable’ but were actually getting ‘reduced’ services instead. The government has however insisted timetables will make services ‘more punctual’.

He has now announced he will oppose the new timetable proposed by the rail industry for December 2022 unless ticket restrictions are eased.

His criticism of the railways comes a month after he hit out at the government for scrapping the eastern leg of HS2 to Leeds, calling their Integrated Rail Plan ‘half measures’. 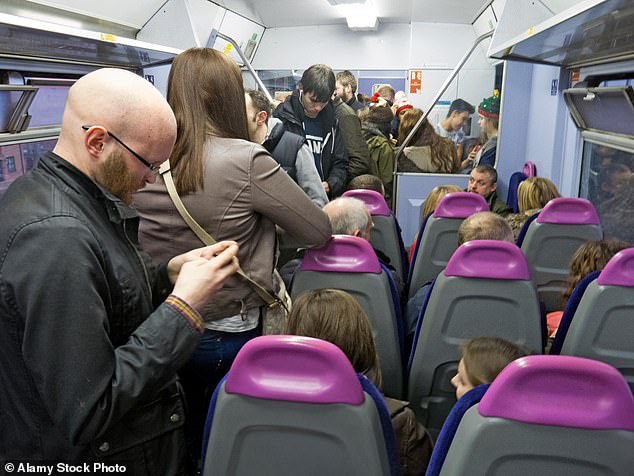 Labour mayor Andy Burnham said he ‘can’t see a justification’ for only allowing passengers with more expensive tickets to use 1st class areas when people are being forced to stand for entire journeys. Pictured: A congested train Warrington to Manchester 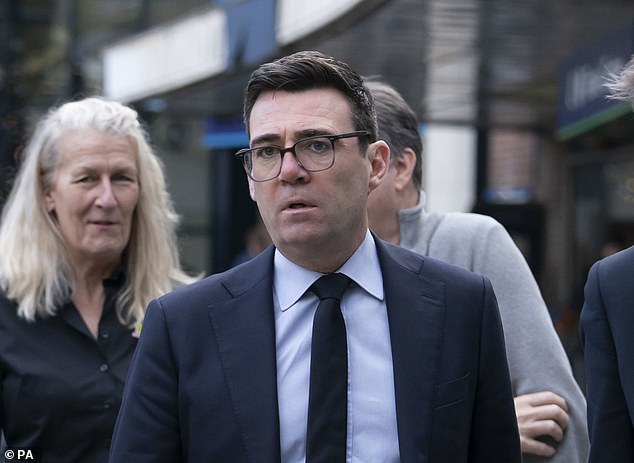 Mr Burnham announced he will oppose a new timetable proposed by the rail industry for December 2022 unless ticket restrictions are eased. Pictured: Mr Burnham outside a Transport for the North board meeting in November

There has also been wider problems with franchises in the industry, after a third operator, Southeastern, was taken into government control after the franchise ran into financial difficulties.

Mr Burnham also demanded that any changes to Manchester’s services are accompanied by a schedule for ‘delivery of infrastructure that will solve our problem’, including easing the bottleneck in the Castlefield area of the city.

At a meeting of strategic transport body Transport for the North, Mr Burnham said the region was ‘promised an expanded timetable’ in 2014, but ‘we are in completely the opposite position’.

He went on: ‘We’re being asked here to accept a much-reduced service without any exit route. I can’t do that.’ 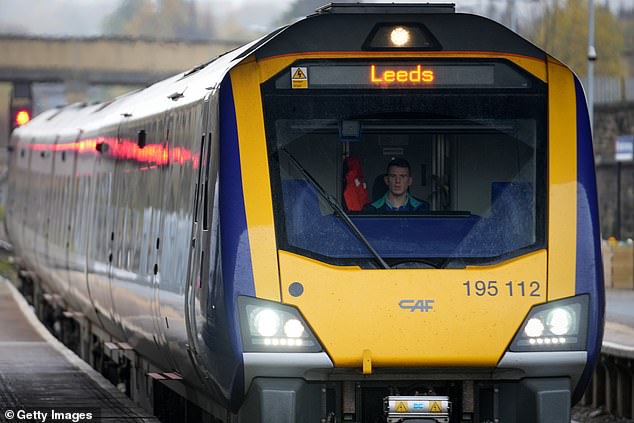 If the timetable is implemented it will lead to many passengers ‘standing up all the way’ between Manchester and Leeds due to a lack of seats, Mr Burnham claimed

If the timetable is implemented it will lead to many passengers ‘standing up all the way’ between Manchester and Leeds due to a lack of seats, Mr Burnham claimed.

‘Until we get back to the expanded timetable we were promised, the trains should be declassified.

‘I can’t see a justification for first class compartments on trains where people can’t get a seat when they’re paying the ticket prices at the level that they are.

‘I’m fed up with being fobbed off on this issue. The industry has not been able to give us a clear answer as to when this capacity will be put in place.’

In October, the Department for Transport insisted the new timetable will provide ‘more punctual, reliable journeys for passengers’.

Train operator Northern, which was taken into government control in March last year, only has standard class compartments.

Since 2018, three train companies – Northern, LNER, and Southeastern – have ended up in the control of the Department for Transport, with ScotRail set to join them next year when that franchise comes to an end. There are suggestions that this could be the start of a renationalisation of the railway system, although critics say the problem has been that the system ‘was just not fit for purpose’. 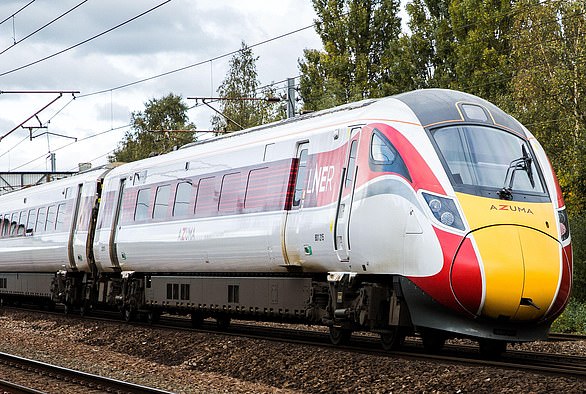 The Government’s Operator of Last Resort has run services on the East Coast Main Line as London North Eastern Railway since June 2018, following the failure of the Virgin Trains East Coast franchise.

Trains on the route were brought back under public control with the London North Eastern Railway (LNER) brand being resurrected from the 1940s.

The East Coast route connects London King’s Cross to stations in the North and Scotland including York, Leeds, Newcastle, Edinburgh, Aberdeen and Inverness.

VTEC, a joint venture between Stagecoach (90 per cent) and Virgin (10 per cent), began operating in March 2015.

The firms agreed to pay the Government £3.3billion to run trains until 2023, but the contract was ended prematurely after they failed to achieve revenue targets.

Stagecoach lost around £200million over the course of the contract. VTEC was the third private operator to fail to complete the full length of a contract to run East Coast services.

GNER was stripped of the route in 2007 after its parent company suffered financial difficulties, while National Express withdrew in 2009. Trains were run by the DfT for six years up to VTEC taking over. 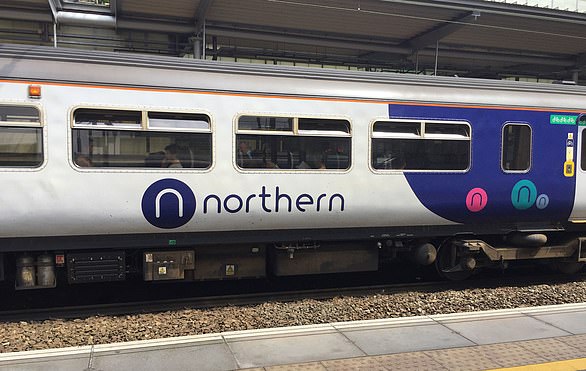 Rail services on the Northern rail network were taken under public control on March 1, 2020 following years of poor performance.

Arriva-owned Northern had received the lowest overall score of all train companies in a major survey by watchdog Transport Focus, with just 72 per cent of passengers were satisfied with their journey.

And Office of Rail and Road figures showed only 55 per cent of Northern trains arrived at stations within one minute of the timetable in the 12 months to February 1, compared with the average across Britain of 65 per cent.

The chaotic introduction of new timetables in May 2018 saw hundreds of Northern trains cancelled each day.

Northern was Britain’s fifth-biggest rail operator based on passenger journeys. It began operating in April 2016 and was awarded the franchise until March 2025, but Grant Shapps announced in January that its contract would be ended five years early.

Problems faced by the firm included cancelled infrastructure projects, delays in the delivery of new trains and prolonged industrial action. 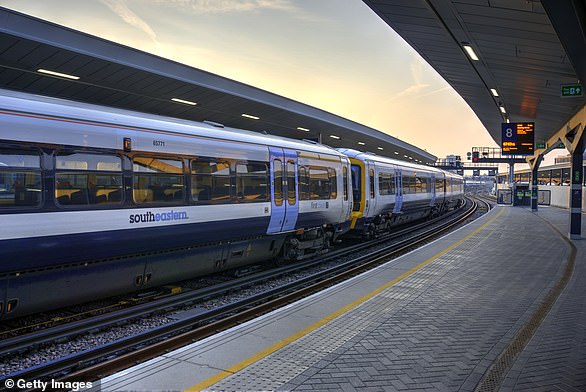 The Department for Transport has decided to take over running services on Southeastern from October 17.

The decision was taken after the operator failed to declare more than £25million of historic taxpayer funding since October 2014 which should have been returned to the Government.

The DfT called this a ‘significant breach of the franchise agreement, undermining trust’, and it could now impose financial penalties under the Railways Act 1993.

The problem is thought to be focused on ‘variable track access charges’. These relate to the High Speed 1 tracks – on which it operates services in and out of St Pancras – which are owned by a group of private investors.

Southeastern’s agreement with the Government meant the DfT would pay the operator a fee, which it was then supposed to pay to HS1 – and any excess would be returned to the DfT. But it appears this did not happen.

The issues are thought to have emerged during talks between the operator and the DfT over a new contract.

Analysis shows that the takeover of Southeastern’s network means around a quarter of passenger journeys in Britain will be on trains under public sector control.