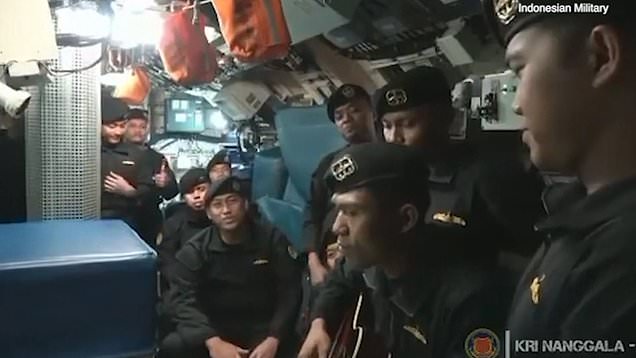 A heartbreaking video shows the crew of the doomed Indonesian military submarine singing on board just weeks before the craft sank.

The clip shows some of the 53 sailors on the vessel smiling as they huddle around a man playing the popular Indonesian hit ‘Sampai Jumpa’ on his guitar.

The song title translates as ‘goodbye’ or ‘until we meet again’.

Just weeks after the scenes of camaraderie were filmed, the KRI Nanggala-402 sank to the seabed, killing everyone board.

The video was released by Indonesian military chiefs as more parts from the submarine were retrieved, including an anchor and fluorescent orange safety suits for emergencies.

The discovery came a day after the navy first confirmed it found parts of the vessel and declared that it had sunk, effectively ending any chance of finding survivors. 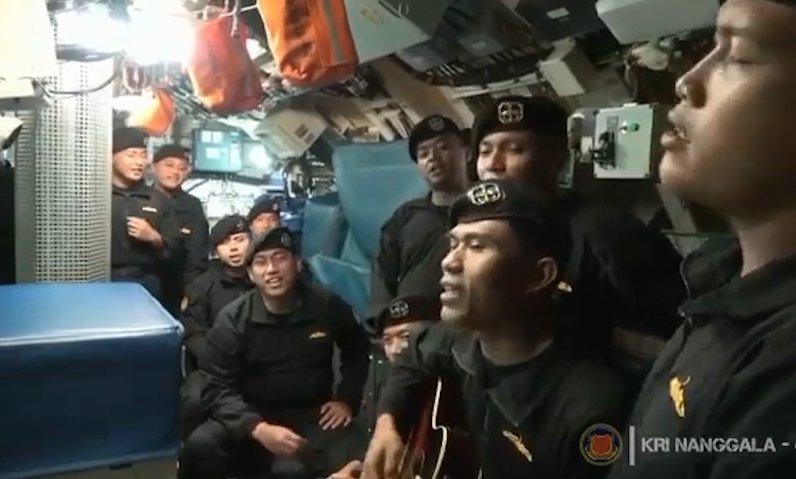 An international search and rescue effort involving aircraft and specialised naval vessels had raced against the clock to find the submarine in case it was still intact and before oxygen ran out.

But on Sunday – four days after the submarine was declared missing – military chief Marshal Hadi Tjahjanto confirmed the Nanggala had sunk and all of it crew had died.

He said: ‘With deep sadness, I can say that all 53 personnel onboard have passed.

‘We received underwater pictures that are confirmed as the parts of the submarine, including its rear vertical rudder, anchors, outer pressure body, embossed dive rudder and other ship parts.

‘With this authentic evidence, we can declare that KRI Nanggala 402 has sunk and all the crew members are dead.’

Authorities have not given an explanation for the accident, but said that the submarine may have suffered a blackout that left its crew unable to resurface.

The navy previously said it believes the submarine sank to a depth of 2,000-2,300ft, much deeper than its collapse depth of 1640ft, at which point water pressure would be greater than the hull could withstand.

Officials are now trying to work out how it could salvage the remains of a submarine from the bottom of the Bali Sea.

Grieving relatives gathered on the seashore in Bali on Monday to pay their respects to the sailors who perished, and urged the authorities to bring up their bodies from the depths.

Experts say it will be a daunting task to lift the submarine to the surface from the deep water, requiring specialised salvage equipment.

A spokesman for Indonesia’s navy said a retrieval operation was still being discussed with experts and international bodies.

‘We will analyse the under water pictures and video, the current etc to decide the technology that will be used,’ First Admiral Julius Widjojono said.