At least 34 people, including eight children, have been confirmed dead after the bus they were traveling on was crushed by a landslide in the northwestern Colombian province of Risaralda on Sunday.

The bus was traveling from Cali to Condoto when a mudslide crushed it and two other vehicles on a stretch of a road between the towns of Pueblo Rico and Santa Cecilia.

Rescuers dug through the rubble for survivors and pulled out nine people alive, the National Unit for Risk Disaster Management said Monday.

Three survivors were rescued from the crushed bus around 2pm Monday, more than 24 hours after the accident. 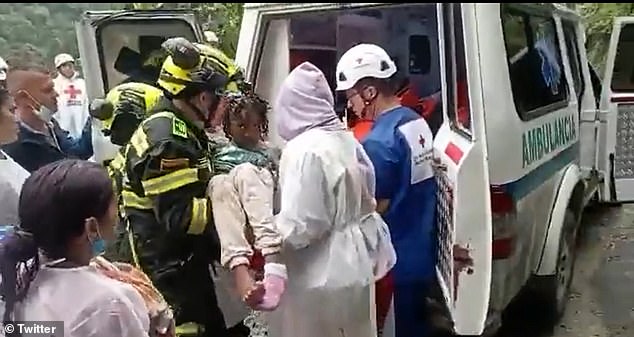 Saray Mosquera (center) is carried into a ambulance after she was rescued Monday afternoon, more than 24 hours after she the bus she was traveling on was crushed by a landslide in Pueblo Rico, Colombia. At least 34 people have been confirmed dead, including her mother and one-year-old brother 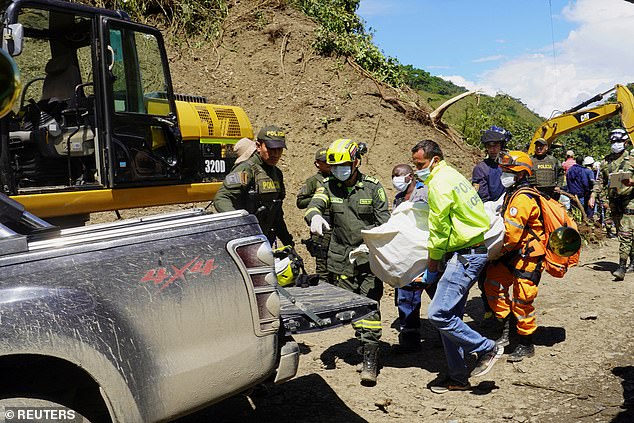 Firefighters and members of rescue teams carry the body of a deceased person during a rescue operation Monday, a day after a bus was buried by a landslide due to heavy rains in Pueblo Rico, Colombia 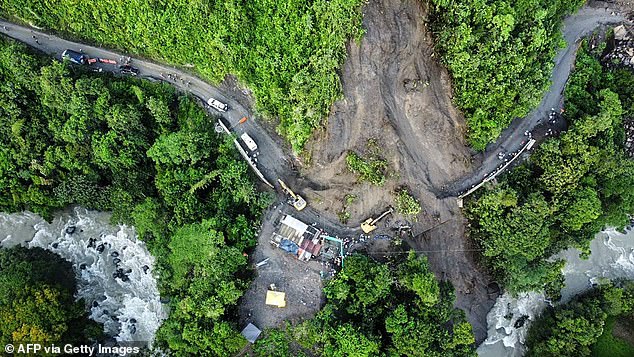 Aerial view the aftermath of Sunday’s landslide in Pueblo Rico, a municipality in the northwestern Colombia province of Risaralda

Among them was nine-year-old Saray Mosquera, who could be seen in a video being carried away by two police officers from a rescue unit. Rescuers found her hugging her mother.

Her one-year-old brother, who was also found clinging to their mother, died.

Her uncle, Carlos Moquera, told news outlet Noticias RCN, that Saray was holding on to her little brother when the landslide crushed the bus.

Saray was hospitalized at San Jorge Hospital in Pereira and remained under observation as of Tuesday.

A second video showed members of a rescue team carrying a woman on a stretcher after she had been removed from the rubble.

Another survivor, Danilo Ríos, told the outlet that he was driving a truck with his 11-year-old nephew and two passengers, and managed to swerve out of the way as mud and rocks came sliding down the mountain.

‘I was going down the road and it happened so fast,’ Ríos said. ‘I didn’t even know how I got out, I just thank God that I’m alive.’ 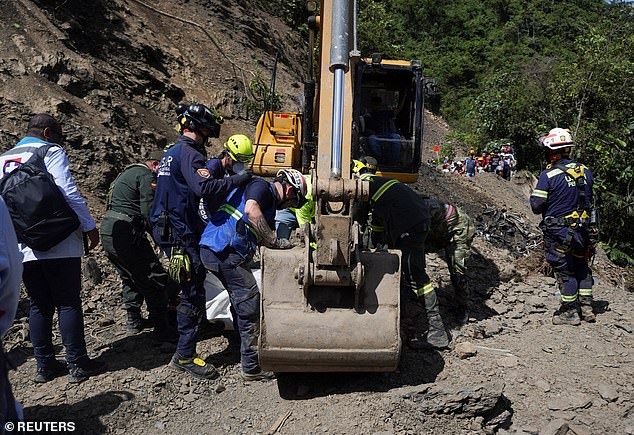 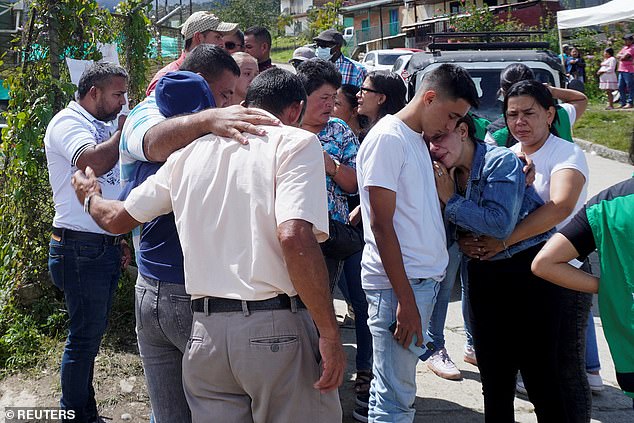 Family members gather outside a stadium in Pueblo Rico, Colombia, where the remains of their loved ones were being taken to after they were killed in Sunday’s landslide

President Gustavo Petro described the incident as a tragedy on Twitter.

‘Solidarity with the families of the victims,’ Petro said, pledging support from the national government.

Landslides are common in Colombia due to the mountainous terrain, frequent heavy rains and informal construction of houses.

The country will focus on reforestation to avoid further tragedies connected to landslides in the future, Environment Minister Susana Muhamad said in a message on Twitter. 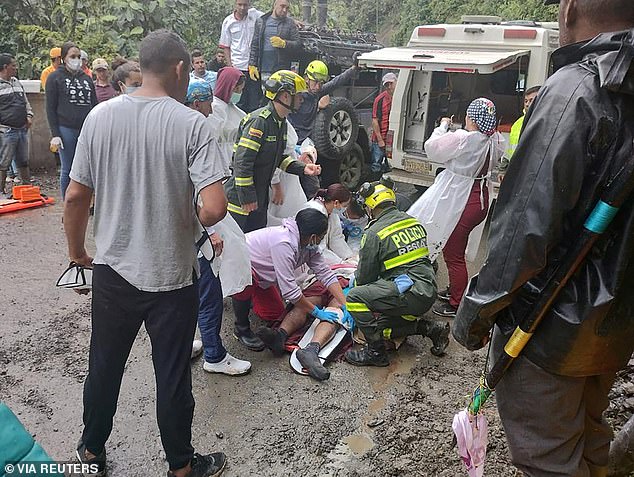 Pueblo Rico Mayor Leonardo Fabio Siagama told reporters that bodies were being brought to a sports stadium in the town.

Colombia has been affected by an unusually heavy rainy season, blamed on the La Nina weather phenomenon.

Events linked to heavy rains have killed more than 216 people and left 538,000 homeless so far in 2022, according to government statistics. Another 48 people are still missing across the country, the figures show.

The country’s most recent large landslide killed over 320 people in the city of Mocoa in 2017.