Bon Jovi, 57, is to meet Harry, who is preparing to quit royal life and drop his HRH style in just a few weeks time, at Abbey Road Studios in London on Friday.

The musician is recording a single in aid of the Invictus Games Foundation, which was set up by Harry and supports an international multi-sport event for injured or sick military personnel.

Appearing on BBC Radio 2’s The Zoe Ball Breakfast Show, the star, whose parents were both in the US Marine Corps, told how he sent Harry the song after writing it for a documentary on soldiers with PTSD.

The title ‘the artist formerly known as Prince’ was used to refer to US music legend Prince after he changed his name to an unpronounceable symbol. 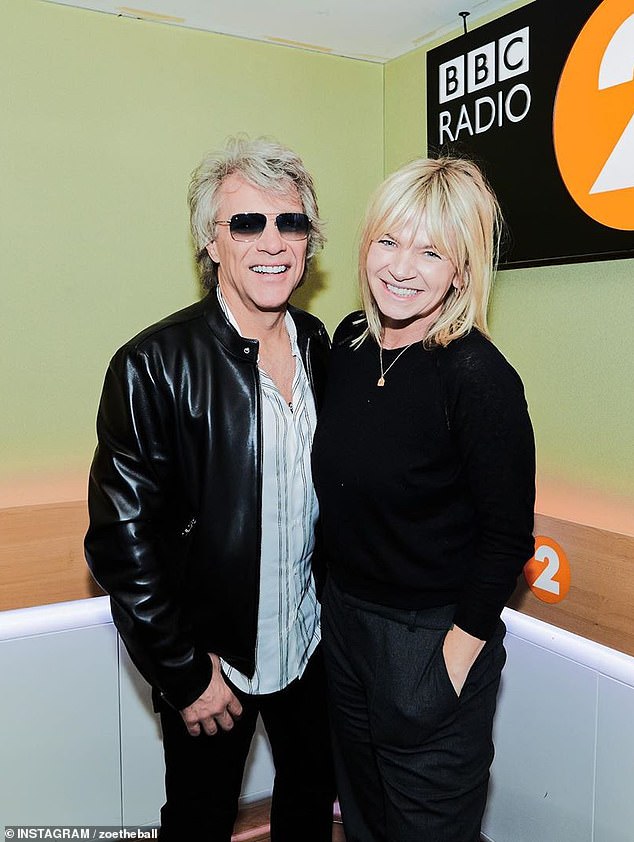 The Duke of Sussex will visit Abbey Road Studios to meet Jon Bon Jovi and members of the Invictus Games Choir. Pictured, the star with Zoe Ball today 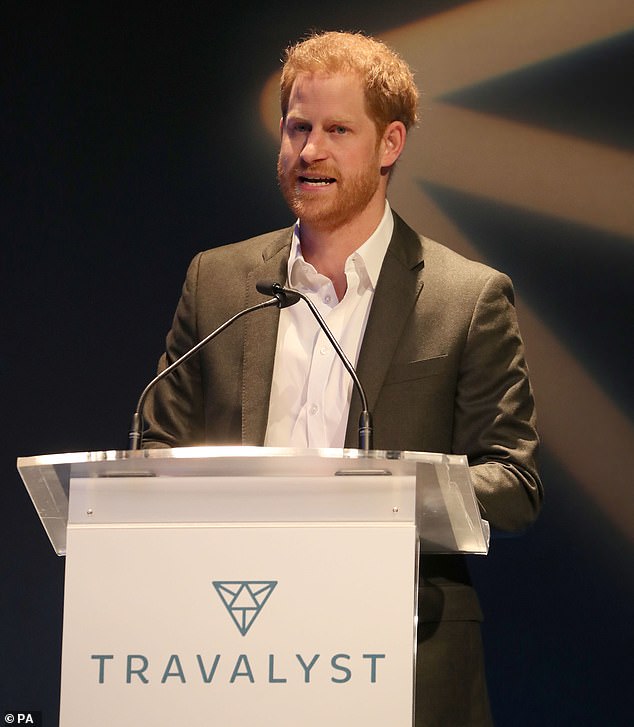 Last week, Prince Harry, 35, took to the Sussex Royal Instagram account to share a witty exchange of messages with music legend Bon Jovi. The Duke of Sussex speaking during a sustainable tourism summit at the Edinburgh International Conference Centre in Edinburgh today

‘He’s gonna be a neighbour and be in your territory now.’

Bon Jovi also made the joke in a conversation with Lorraine this morning.

Harry and Meghan Markle will spend the majority of their time in North America after quitting royal duties for a life of personal and financial freedom on March 31.

Bon Jovi described it as ‘pretty special’ that Harry was joining him in the famous studio in the wake of the Megxit crisis.

‘In light of everything that’s gone on in his life, for him to be coming back and this be the first thing on his docket I think was pretty special,’ he said.

The song, titled Unbroken, will be recorded with the Invictus choir in the same Abbey Road Studios room where The Beatles recorded many of their albums. 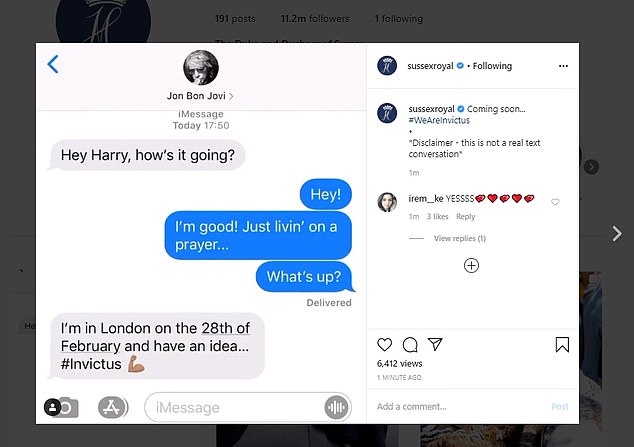 In the amusing messages, Prince Harry can be seen making several references to the pop star’s hit song, Living On a Prayer

Last week, Harry’s Instagram account released a mocked-up text exchange between the musician and the duke, discussing the project.

The song aims to shine a light on veterans living with post-traumatic stress disorder and will be on the band’s album Bon Jovi 2020.

The Invictus Games Choir, which is managed by the Help For Heroes charity, is made up of wounded and sick veterans and serving military personnel.

Prince Harry has shared an amusing exchange of messages with music legend Jon Bon Jovi to confirm their attendance to an upcoming Invictus Games event on February 28.

Taking to the Sussex Royal Instagram account, the Duke, 35, shared a short video showing the fake texts between himself and Bon Jovi, alongside the caption: ‘Coming soon…*Disclaimer – this is not a real text conversation*’

The conversation opens with Jon Bon Jovi asking Harry ‘how’s it going?’ to which the father-of-one replies with a witty reference to one of the star’s number one hits: ‘I’m good! Just livin’ on a prayer…’

Jon Bon Jovi then proceeds to explain that he’s in London on February 28 – the date the Duke of Sussex will visit Abbey Road Studios to meet him and members of the Invictus Games Choir.