Author JK Rowling has said she she does not feel that she has been ‘cancelled’ after criticism of her trans views.

The author’s views on gender ideology, expressed in a number of controversial tweets, have led to a significant public backlash, as well as criticism from Harry Potter stars such as Daniel Radcliffe and Emma Watson.

However, in an interview for Letters from Suzanne, a Substack publication by writer and columnist Suzanne Moore, the author said: ‘The only time I’ve ever made reference to being cancelled, my book sales went up.

‘Why am I even laughing? I can’t believe I’m saying these words. But you have to mock them. I do not consider myself cancelled.’

It comes as Ms Rowling today announced she will fund a new women-only service for victims of sexual violence. 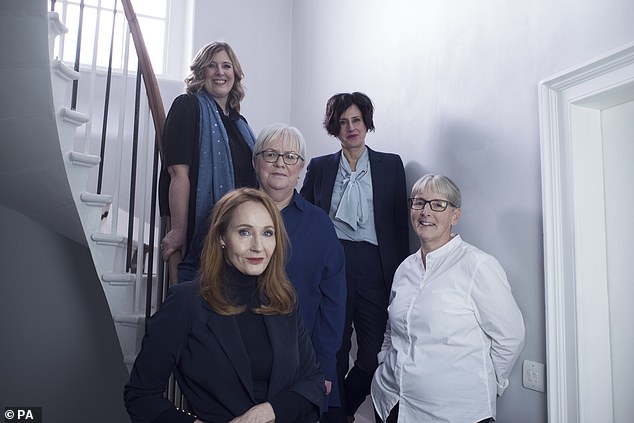 The Harry Potter creator, 57, has founded and will pay for an Edinburgh-based centre called Beira’s Place.

Ms Rowling made the announcement days before a controversial Gender Bill hits the Scottish Parliament.

Nicola Sturgeon’s Gender Recognition Reform Bill has come under fire because it is feared predatory men will exploit it to pose as females and abuse their rights.

The public backlash against the author’s views arguably started in March 2018, when Ms Rowling was criticised for liking a tweet which referred to trans women as ‘men in dresses’.

After the news was picked up by a number of major media outlets, some took to vent their anger online.

In a statement to Newsweek, Ms Rowling’s spokesperson said: ‘It was a mistake.

‘I’m afraid JK Rowling had a clumsy and middle-aged moment and this is not the first time she has favourited by holding her phone incorrectly!’ 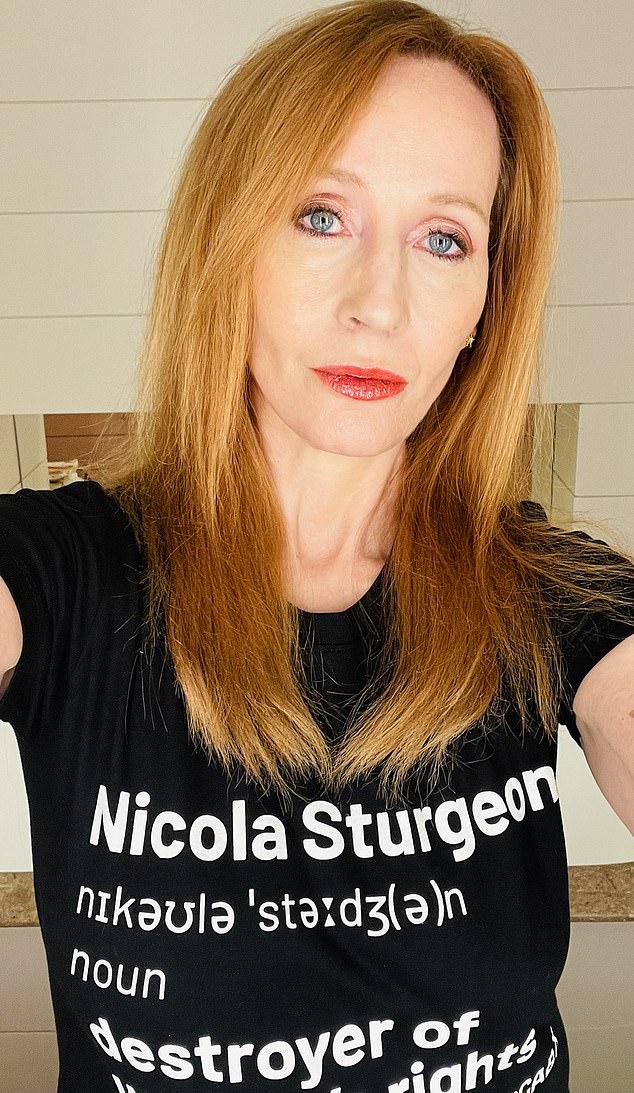 JK Rowling has today announced she will fund a new women-only service for victims of sexual violence. The author made the announcement days before a controversial Gender Bill hits the Scottish Parliament

A tweet by the author in June 2020, in response to a headline referencing ‘people who menstruate’, sparked intense criticism from many members of the general public.

Ms Rowling wrote: ‘”People who menstruate.” I’m sure there used to be a word for those people. Someone help me out. Wumben? Wimpund? Woomud?

Some saw this as a direct attack on the trans community.

Many celebrities and trans organisations also publicly spoke out against the author.

The actor said: ‘Transgender women are women. Any statement to the contrary erases the identity and dignity of transgender people and goes against all advice given by professional health care associations who have far more expertise on this subject matter than either Jo or I.’ 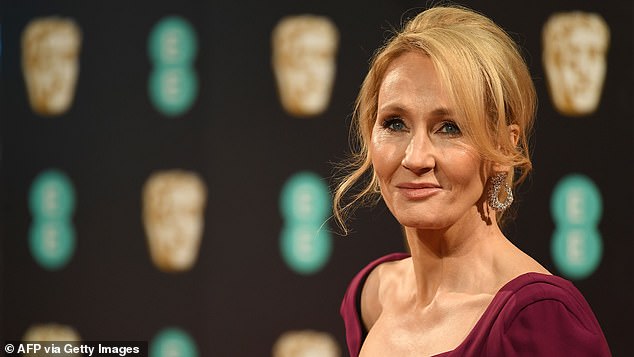 Pictured: JK Rowling poses upon arrival at the BAFTA British Academy Film Awards at the Royal Albert Hall in London on February 12, 2017

On June 10, Ms Rowling issued an online essay on her reasons for speaking out on sex and gender issues.

The Harry Potter author addressed criticism of her response to an article that described ‘people who menstruate’.

In a lengthy blog, she wrote that her interest in trans issues originated from being a survivor of abuse and having concerns around single-sex spaces.

In the blog post Ms Rowling detailed what she said were the five reasons why she felt the need to talk about the issue.

These included her interest in ‘both education and safeguarding’ and ‘freedom of speech’.

Explaining her final reason, she wrote: ‘I’ve been in the public eye now for over 20 years and have never talked publicly about being a domestic abuse and sexual assault survivor.

‘This isn’t because I’m ashamed those things happened to me, but because they’re traumatic to revisit and remember.’

The author added: ‘I also feel protective of my daughter from my first marriage. I didn’t want to claim sole ownership of a story that belongs to her, too.

‘However, a short while ago, I asked her how she’d feel if I were publicly honest about that part of my life and she encouraged me to go ahead.

‘I’m mentioning these things now not in an attempt to garner sympathy, but out of solidarity with the huge numbers of women who have histories like mine, who’ve been slurred as bigots for having concerns around single-sex spaces.’

On Twitter that evening, Ms Watson, 32, also voiced her support for the trans community. 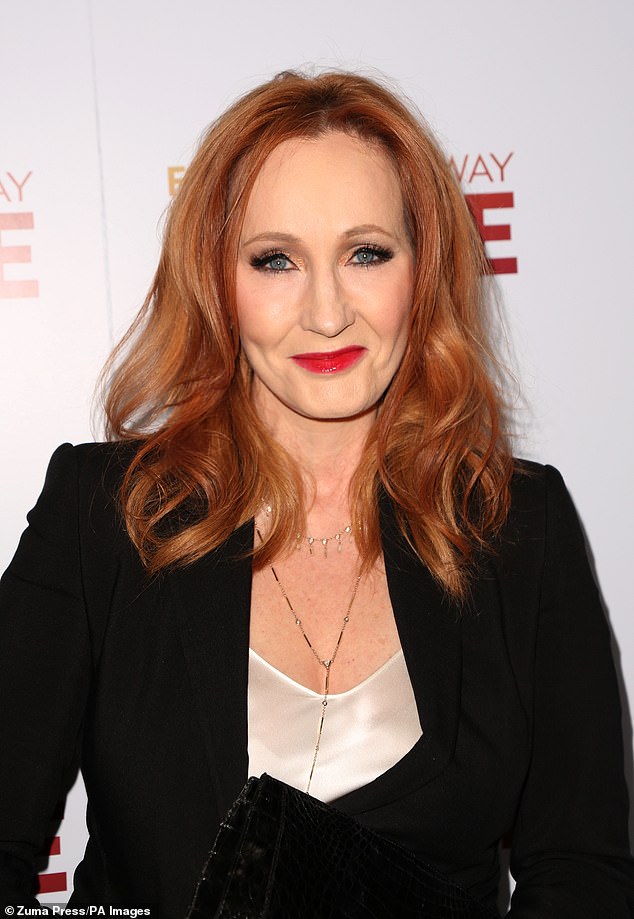 In an interview for Letters from Suzanne, the author said: ‘The only time I’ve ever made reference to being cancelled, my book sales went up. Why am I even laughing? I can’t believe I’m saying these words. But you have to mock them’

Rupert Grint, 34, who played Ron Wesley in the Harry Potter franchise, also issued a statement in response to Rowling’s essay.

‘We should all be entitled to live with love and without judgment.’

Rowling was labelled a TERF (trans-exclusionary radical feminist) by some outraged members of the public.

In response, Rowling wrote an essay on her website, titled TERF wars.

Ms Rowling wrote: ‘I believe the majority of trans-identified people not only pose zero threat to others, but are vulnerable for all the reasons I’ve outlined.

‘Trans people need and deserve protection. Like women, they’re most likely to be killed by sexual partners. Trans women who work in the sex industry, particularly trans women of colour, are at particular risk. Like every other domestic abuse and sexual assault survivor I know, I feel nothing but empathy and solidarity with trans women who’ve been abused by men.’

She added: ‘So I want trans women to be safe. At the same time, I do not want to make natal girls and women less safe. When you throw open the doors of bathrooms and changing rooms to any man who believes or feels he’s a woman – and, as I’ve said, gender confirmation certificates may now be granted without any need for surgery or hormones – then you open the door to any and all men who wish to come inside. That is the simple truth.’ 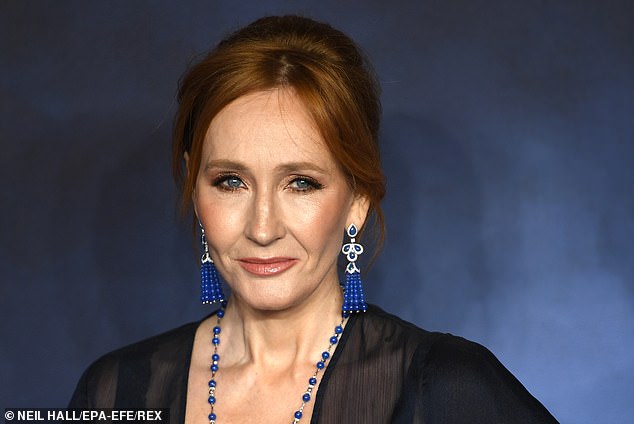 Pictured: JK Rowling arrives at the UK premiere of Fantastic Beasts: The Crimes of Grindelwald in London, 13 November 2018

In July 2020, the author tweeted, in response to a post calling out the author for ‘liking’ a tweet that claimed hormone prescriptions were ‘the new antidepressants’: ‘Many, myself included, believe we are watching a new kind of conversion therapy for young people, who are being set on a lifelong path of medicalization that may result in the loss of their fertility and/or full sexual function.’

In August 2020, Ms Rowling returned an award from the Robert F. Kennedy Human Rights organization after its president, Kerry Kennedy, publicly criticised the author’s comments about members of the trans community.

In December 2021, Rowling made another controversial social media post prior to the release of the trailer for Fantastic Beasts: The Secrets of Dumbledore.

The author addressed a report that the Scottish police would begin to record rapes by offenders with male genitalia as being committed by a woman if the attacker identifies as a female.

Ms Rowling tweeted: ‘War is Peace. Freedom is Slavery. Ignorance is Strength. The Penised Individual Who Raped You Is a Woman.’ 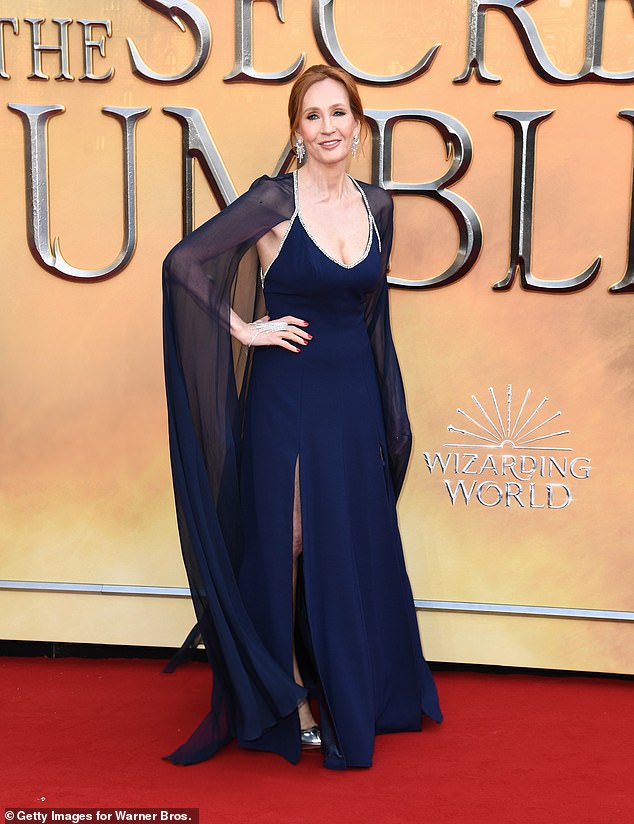 Pictured: JK Rowling attends the Fantastic Beasts: The Secrets of Dumbledore world premiere at The Royal Festival Hall on March 29, 2022

In September 2020, Robbie Coltrane, who played Hagrid in the film series and passed away in October, defended Ms Rowling.

‘I don’t think what she said was offensive, really. I don’t know why but there’s a whole Twitter generation of people who hang around waiting to be offended,’ he told Radio Times.

‘They wouldn’t have won the war, would they? That’s me talking like a grumpy old man, but you just think, Oh, get over yourself. Wise up, stand up straight, and carry on.’

He continued: ‘I don’t want to get involved in all of that because of all the hate mail and all that s***, which I don’t need at my time of life.’

Helena Bonham Carter, 56, who played Bellatrix Lestrange in the Harry Potter films, took to Ms Rowling’s defence in a November 2022 interview with The Sunday Times Magazine.

The actress said: ‘I think she has been hounded. It’s been taken to the extreme, the judgmentalism of people. She’s allowed her opinion, particularly if she’s suffered abuse.

‘Everybody carries their own history of trauma and forms their opinions from that trauma, and you have to respect where people come from and their pain. You don’t all have to agree on everything—that would be insane and boring. She’s not meaning it aggressively, she’s just saying something out of her own experience.’