Strictly results LIVE: Will Mellor and Nancy Xu are the 11th couple eliminated as professional dancer breaks down over exit

Will’s professional dancer Nancy Xu broke down into tears as the news was announced.

She said: ‘I want to thank everyone who works on the show, it’s an incredible show, I’ve had such an amazing journey. The support from the whole team is just phenomenal.

‘I’m proud of the partnership, we’ve had such an amazing journey together. I really wish I could make more memories with you and your family.’ 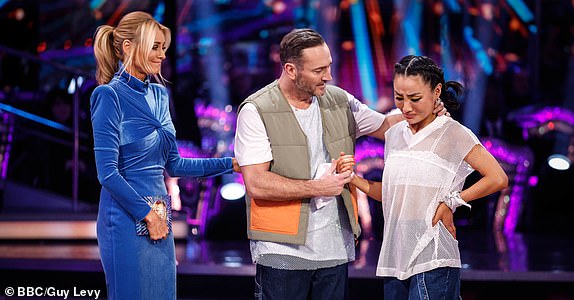 After narrowly missing out on the final, Will gratefully said: ‘I have to thank you all for giving me this chance to put a smile on my mum’s face, she deserves it.

‘I’ll take whatever I have learnt from this show forward in whatever I do because it shows you can achieve more than you think.

‘I didn’t think I’d be able to get anywhere near this and I am so proud of what we have achieved but also everybody who has voted for me, who has supported me, the messages I’ve had from my local community and children. Thank you all so much, we really, really appreciated every bit.’

#Strictly Semi-Finalists Will and Nancy have given everything this series. They're taking so many memories home from an incredible 12 weeks together 💕@Mellor76 @Nancy_xuxi pic.twitter.com/tAGP0SsAeq

After the dance-off Tess asked the judges to name the celebrity they wanted to stay for the final.

Choosing Fleur and Vito, Craig Revel Horwood said: ‘This has been really difficult tonight for me and I’ve done a lot of these darling! I found it so hard because both couples are extraordinary and I want to see both couples in the final but that can’t be so. For me, tonight the most impressive couple that I would like to save and send through to the final are Fleur and Vito.’

Choosing Will and Nancy, Anton Du Beke said: ‘Well based on this dance in the dance off and this dance only, I think it is really important to say that, because these couples both danced terrifically and I marked them the same on Sunday night.

‘And now I am looking for real detail, how do I separate them? I’m really searching for something, it’s such fine detail. Due to an error in a dismount from a lift, I am going to have to save Will and Nancy.’

Head judge Shirley was given the deciding vote, with the star choosing Fleur and Vito, saying: ‘First of all, the British public has spoken and with respect I take that on board.

‘My fellow judges have decided that they don’t agree, so I have made lots of notes here, both couples were outstanding and not only today but through the series.

‘I have loved both of them, this is by far, even for me Craig, the most difficult decision I feel I have had to make. Based on micro details, I have decided to save Fleur and Vito.’

So, Will Mellor and his professional partner Nancy Xu are out of the competition this week. 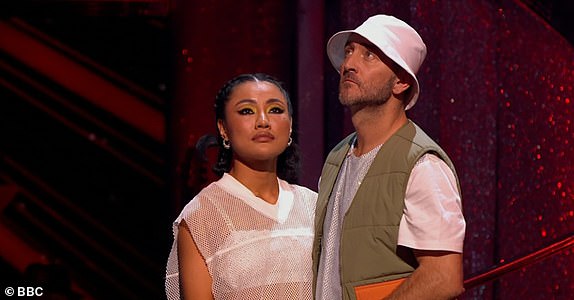 Will looked disappointed as he was told he would be a part of this week’s dance-off, with the actor turning to kiss his professional dance partner Nancy on the head.

Helen and Gorka are in the #Strictly Final! 🎉

But Will and Nancy now face the Dance Off 🚨 pic.twitter.com/0RDPUxQcCk

Tess then revealed Will Mellor and Nancy Xu were the next couple to compete in the dance-off, meaning Helen Skelton and her professional partner Gorka Marquez have made it through to next week’s final.

Will said: ‘If this is my last dance, I’m going to enjoy every minute of it… I’ve enjoyed every bit of my journey and I’m just going to give it all I’ve got.’ 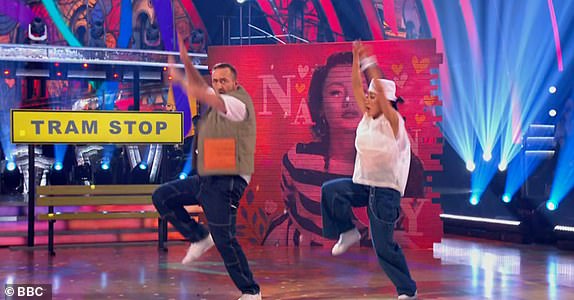 Fleur nodded as she was told she would have to compete in this week’s dance-off while Vito looked disappointed.

It's another Dance Off for Fleur and Vito 😢 #Strictly pic.twitter.com/64RhnqAzoV

Giving the last five remaining celebrities the results, host Tess Daly revealed first that Molly Rainford and her professional partner Carlos Gu were the first couple to make it through to next week’s final.

Next, Tess told Hamza Yassin and his professional partner Jowita Pryzstal that they were the next pair to make it through.

Tess then told singer Fleur East and her professional partner Vito Coppola that were in the bottom two and would battle for a place in the final in this week’s dance-off.

Fleur said: ‘What a ride. Honestly, I’ve been so happy and proud of everybody so if I have to be the one here. I’ll take it for the team.’

Fleur and Vito will perform the Charleston again. 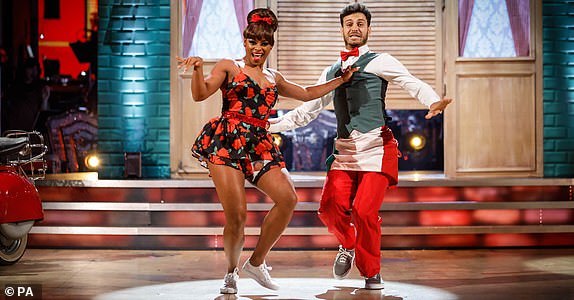 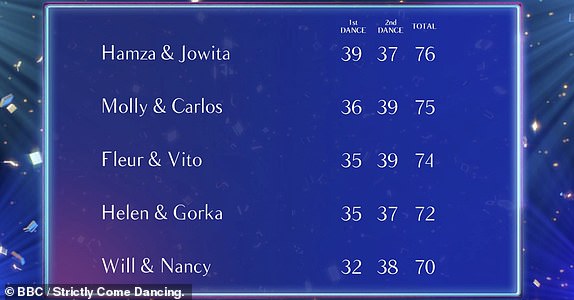 ‘I’m freezing!’ Motsi Mabuse flashes her legs in a dazzling silver minidress as she belts out White Christmas while braving the snow after Strictly filming

Motsi Mabuse looked incredible as she sang White Christmas while braving the snow, in a video shared to Instagram on Sunday night.

The Strictly judge, 41, flashed her legs in a dazzling silver minidress with long sleeves and shoulder pads as she belted out the 1942 song made famous by Bing Crosby.

Joking around after filming the BBC ballroom show’s semi-final, she broke into song before quipping, ‘…But I’m freezing!’

Fleur East has revealed that she suffered a wardrobe malfunction on Sunday during the dress rehearsal for the Strictly Come Dancing semi-final.

The hitmaker, 35, admitted that despite impressing the judges and recieving 74 out of a possible 80 points, it wasn’t all smooth sailing on the day.

‘I basically flashed everyone, it was so bad!’ explained the star as she recalled lifting her skirt during the dress show before the live dance.

Strictly Come Dancing fans have been left fuming as the finalists for tonight’s results show have been leaked online.

Taking to Twitter on Monday, some social media viewers were said to be ‘furious’ over the results published to The Strictly Spoiler.

Others said that they were ‘pleased’ as they believed that the correct decision had been made, while hoping that the spoilers reigned true.

So strictly spoiler has finally dropped. Furious for one of the folk in the dance off, accepting of who got sent home. Final is going to be boss

Yes I DID and ALWAYS have voted for them each week. Gutted. Really gutted. 😔😢#StrictlySpoiler

#StrictlySpoiler has finally leaked. I'm assuming a full on strop occurred when they were told they were leaving.

Regarding the strictly spoiler. I am happy with who went. Even tho they were brilliant. The other dancer was brilliant

Strictly Come Dancing returned to screens for the semi-final on Sunday night, as the five remaining celebrities took to the dance floor with two performances with their professional partners.

The show was moved from its usual Saturday slot due to Qatar World Cup scheduling while the results show will air on Monday night on BBC One at 8:15pm.

Wildlife presenter Hamza Yassin, 32, topped the leaderboard with his professional dance partner Jowita Pryzstal, 28, scoring 76 points while actor Will Mellor, 46, placed last with 70 points, with the actor branding his first dance of the night ‘too aggressive’.