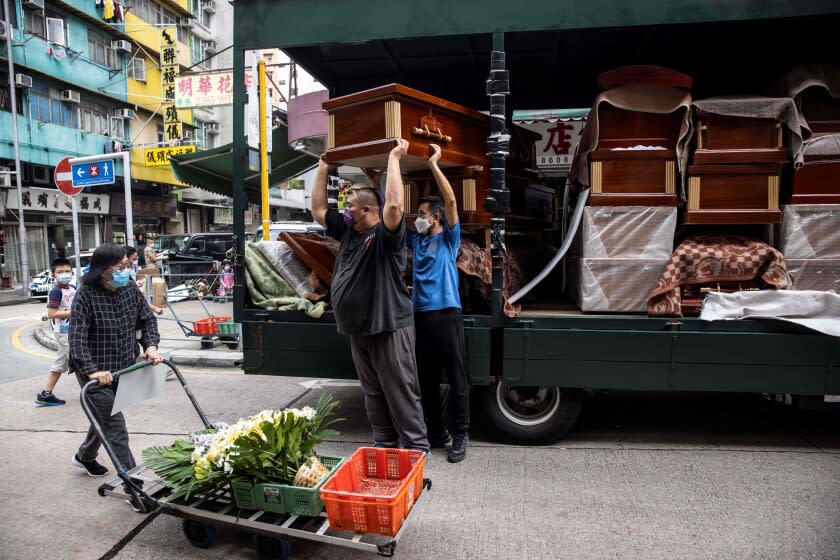 The repurposed AsiaWorld Expo center in Hong Kong echoes with the moans of elderly COVID-19 patients. Kept in 8-square-foot cubicles, many go weeks without fresh air, sunlight or a bath. Some take their last breaths under the harsh glow of the convention hall lights. On a good day, an ambulance will arrive in an hour to carry their bodies away.

“It’s a nightmare,” said Lily, a 22-year-old nurse at the isolation facility. “Sometimes we call for an ambulance because a patient needs to go to a hospital and we’re told it will take one to two days to arrive. It’s really shocking.”

The nurse, exhausted by having to care for more than 150 patients with one other co-worker, declined to give her last name because staffers were ordered not to speak to the press about the conditions at the site, which have come to exemplify the runaway COVID-19 crisis in Hong Kong.

In just a matter of weeks, the city of more than 7 million has transformed from one of the safest places to be during the global pandemic to having what’s believed to be the highest rate of COVID-19 deaths in the world. On Feb. 18, Hong Kong had a total of 259 COVID-19 deaths since the pandemic began. A month later, the number had soared to nearly 4,600 — on par with the reported total in China, a country of 1.4 billion people.

With an alarmingly low vaccination rate among its seniors, about 90% of Hong Kong's deaths in the latest wave have been of patients 60 or older. Morgues and hospitals have run out of room to store bodies. The city is awaiting a fresh batch of coffins arriving by sea.

Concerns are now spilling into mainland China, which is facing its worst outbreak since the disease was first reported inWuhan in early 2020. Fueled by the easily transmissible Omicron variant, the number of cases on the mainland has surged in the last week, with authorities reacting by locking down neighborhoods in major cities such as Shanghai, Shenzhen and the entire province of Jilin, affecting tens of millions of people.

“We are at a key stage,” said Jing Junhai, Jilin’s Communist Party chief, .

Combined with Omicron-fueled outbreaks in South Korea and Vietnam, the pandemic is proving stubbornly resilient in parts of Asia at a time when the United States and Europe have decided — rightly or wrongly — to move on from the virus, lifting mask mandates and allowing large gatherings.

That social freedom comes after the loss of more than 2 million American and European lives. By comparison, the death toll in China, Hong Kong, South Korea and Vietnam officially numbers in the tens of thousands, in no small part because of strict adherence to policies such as zero tolerance for COVID.

The strategy, which relies on tightly-controlled borders, mass testing, quarantining and isolation to eliminate all instances of the virus, was already under strain for weakening economic growth and fraying the nerves of millions of people desperate to travel, attend school and do business like before.

Now it faces its biggest test with Omicron predicted to infect more than half of Hong Kong’s population in the coming weeks, while threatening to spread across mainland China where there’s virtually no natural immunity and millions of unvaccinated seniors.

“In the earlier phases of the pandemic, the goal of keeping cases as close to zero as possible was reasonable,” said Keiji Fukuda, a leading epidemiologist and the former director of Hong Kong’s top public health school at the University of Hong Kong. “But over time, COVID-19 showed its ability to persist and evolve…[It] shows no signs of disappearing. Since the most likely scenario is that the world will be living with COVID-19 indefinitely, the value of a zero-case policy diminishes.”

Hong Kong, a former British colony that still maintains some autonomy from China, proved zero tolerance could work when caseloads were low. But when Omicron lifted the number of daily infections in the city by more than 800% starting in mid-February, it exposed many of the city’s shortcomings — none more devastating than the failure to inoculate enough of Hong Kong’s elderly.

Less than 45% of Hong Kong residents ages 70 and up were vaccinated when the outbreak started. The rate was even lower for seniors in assisted-living homes at under 20%. That’s well below Hong Kong’s total vaccination rate of 72%.

Overnight, the Asian financial center was inundated with scenes of sickly older patients flooding hospital wards. Space became so limited that many had to be wheeled outdoors and kept on the side of roads without shelter.

Experts say a number of factors have led to low rates of vaccination among Hong Kong’s seniors. Political unrest starting in 2019 bred distrust of the government, weakening their calls to heed public health advice. Other seniors were influenced by misinformation online and in local media about threats vaccines allegedly posed to the elderly and frail. Many reasoned it wasn’t worth risking a jab when the city had so few cases. Moreover, studies have shown China’s domestic vaccines made by Sinovac and Sinopharm are less effective at preventing disease than their mRNA counterparts.

“This tragedy was entirely predictable and it was entirely preventable,” said Gabriel Leung, dean of medicine at the University of Hong Kong. “We've had early, sustained, uninterrupted, privileged access to vaccines. And yet we are probably the only population in the Global North that has such poor coverage of our most vulnerable.”

The city is now upping its efforts. Its health department did not respond to a request for comment on conditions at AsiaWorld Expo.

Lam's government has been widely criticized for its handling of the crisis. Its failure to clearly rule out a lockdown led to panic buying and the emptying of supermarket shelves earlier this month. The forced isolation of COVID-19 patients resulted in parents being separated from their infants. And a plan to test all residents for the virus appears to have collapsed because the city’s labs lack capacity.

The missteps have reinforced perceptions of Hong Kong’s decline as a global city. The outbreak has exacerbated the exodus of residents, which reached levels unseen last year in more than half a century. Meanwhile, the city's stock market dipped to its lowest level in eight years this week.

“The government could have handled this much better,” said Bruno Ko, a fourth-year biomedical engineering student who recently recovered from COVID-19. “They allowed rumors to spread and created panic.”

Ko said he was likely infected by his parents, with whom he shares a 1,000-square-foot apartment. When his father called a hotline to seek an isolation center, he couldn't get through because the line was inundated. The family eventually stopped trying and recovered at home.

“Everyone is exhausted,” said Ko, whose voice remains scratchy from the virus. “We’re going crazy staying home with no social life and no food. You can't even get KFC delivered at night. They can’t continue with zero-COVID because this is going to last for years.”

Officials in mainland China have started to contemplate what a more accommodating COVID-19 policy might look like. But in briefings and interviews with Chinese state media, experts and epidemiologists said current prevention measures will need to be upheld in order to minimize serious illness among the unvaccinated and the strain on the country’s medical resources.

Zhang Wenhong, a well-known epidemiologist in Shanghai, said on China’s Twitter-like platform Weibo this week that the situation in Hong Kong has shown the importance of vaccinations, particularly among the elderly

According to a November report from state-run media outlet Xinhua News Agency, about 81% of China's 264 million people over age 60 have received at least one dose of vaccine, leaving about 50 million unvaccinated.

As a rise in confirmed cases kicks off a countrywide scramble to contain outbreaks, many residents are more concerned about getting ensnared in the country’s epidemic prevention measures than actual infection.

Cindy, a 26-year-old Shanghai resident who declined to give her last name, said the breadth and uncertainty of the latest COVID-19 restrictions has been frustrating. Despite living less than a mile away from an outbreak site, she’s preoccupied with what will happen to her dog if she gets stuck away from home.

“What scares most of my friends around me is to be locked down in the wrong place for 14 days,” she said. “The government wants so badly to have zero cases.”

Others say they can no longer tell the difference between a lockdown and the COVID controls that have permeated everyday life in China.

In Shenzhen, photographer Leo Lee doesn’t feel much impact from staying at home, since he often works remotely and orders groceries online for delivery. Two of his co-workers, in anticipation of the partial lockdown, opted to live at the office for access to the photo studios. With public transportation halted, one took a cab and the other rode a bike, he said.

“People here are optimistic and completely cooperate,” Lee said. “I don’t think we will need a long time to reach zero cases.”

There are signs that China is attempting more flexibility in its latest COVID-19 control measures. Rather than shutting down the entire city of Shanghai, apartment complexes and communities have been cordoned off in shifts while residents undergo mass testing. China’s National Health Commission adjusted its policy to allow patients with mild symptoms to isolate in centralized quarantine facilities rather than at hospitals, and lowered the bar for patients to be discharged.

Zhang, sometimes referred to as China’s Dr. Anthony Fauci, struck an optimistic tone in his public post despite the outbreak. He said while containing the virus will provide a window of opportunity to vaccinate more elderly residents and improve testing and treatment, it doesn't mean that the strategy moving forward would always be lockdowns and large-scale testing. Any long-term measures would have to be both gentle and sustainable, he said.

“In two years of fighting the pandemic, is the most difficult period the long winter night or the cold snap in spring?” Zhang wrote. “When we clearly see the road ahead and the spring that must come, what is there to be afraid of?”

Pierson reported from Singapore and Yang from Taipei. Special correspondents Chi-Hui Lin in Taipei and Antonia Tang in Hong Kong contributed to this report.