Almost 200 migrants rescued by a humanitarian aid boat in the Mediterranean Sea began to leave the vessel in Sicily late on Monday after nine days stuck on the ship which saw some attempt suicide and others threaten the crew.

A journalist aboard the Ocean Viking watched as the migrants, in single file and carrying backpacks, docked at Porto Empedocle on the Italian island’s western coast.

Police escorted them a short distance to another vessel, where they will be quarantined to prevent the possible spread of coronavirus.

The arrival of the boat chartered by charity group SOS Mediterranee capped a tense few days onboard marked by migrants jumping overboard, a suicide attempt and bouts of violence. 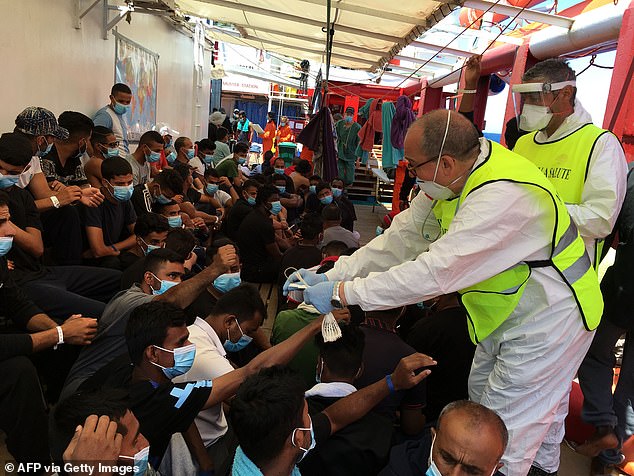 After being rescued in four separate operations on June 25 and 30, the migrants were forced to wait on the Ocean Viking 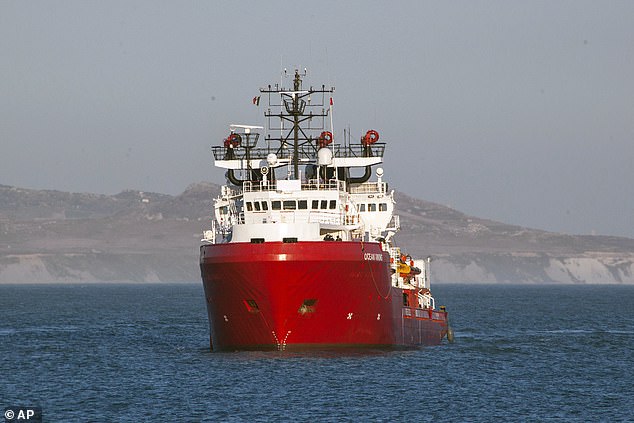 After being rescued in four separate operations on June 25 and 30, the migrants waiting on the ship became increasingly agitated, according to SOS Mediterranee, as the charity awaited the go-ahead from either Italy or Malta to dock at a safe port.

However, approval did not arrive until Sunday, after the group declared a state of emergency on board, adding it could no longer guarantee the safety of the migrants or the crew.

Soon after 6pm, the Ocean Viking docked at the port directly in front of Italian ferry Moby Zaza, where the migrants will wait out a two-week quarantine period.

Earlier on Monday, a separate group of 169 migrants disembarked from the Moby Zaza after a two-week quarantine.

Thirty of the group – all of whom were rescued last month by Sea-Watch, another humanitarian group – tested positive for coronavirus and will remain on the ferry in an isolated ‘red zone’ area.

SOS Mediterranee spent most of Monday waiting roughly four kilometres (2.5 miles) from the coast before being allowed to dock, as it warned that tensions were rising and the long wait was ‘amplifying risks on board’.

From the deck of the Ocean Viking, migrants who have waited for more than a week to disembark could make out both the Sicilian coast and the immense ferry, the Moby Zaza, according to an AFP reporter on board.

The mayor of Porto Empedocle, Ida Carmina, told reporters that the migrants’ arrival was too much for the economically suffering community to support. 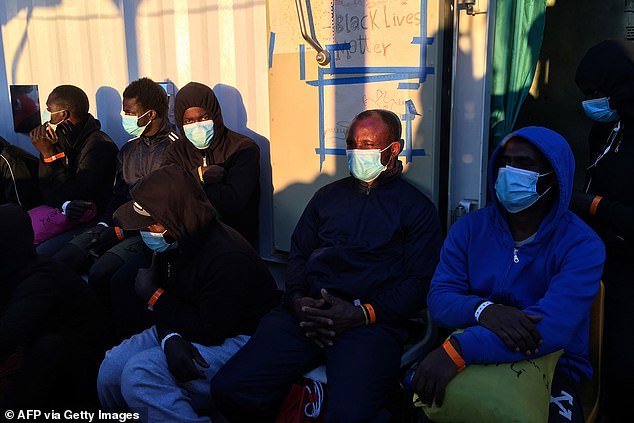 From the deck of the Ocean Viking, migrants who have waited for more than a week to disembark could make out both the Sicilian coast and the immense ferry 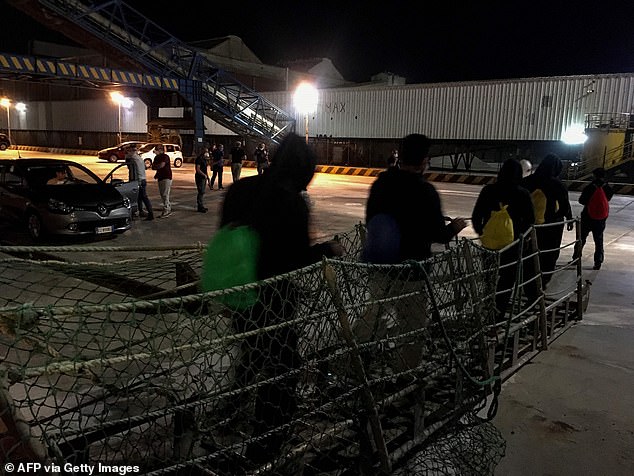 ‘Now that we’re coming back, starting tourism back up, this thing is an incredible blow for us,’ Carmina said, who noted the town had reported no cases of coronavirus during Italy’s health crisis.

The 180 migrants – from Bangladesh, Pakistan, Eritrea, Nigeria and North African countries – include 25 minors and two women, one of whom is pregnant.

Rising tension culminated in fights between migrants frustrated by the long waiting period and their inability to call their families to let them know they were safe.

One migrant tried to hang himself and two others threw themselves overboard, said the charity.

However, the group was overjoyed when they finally saw the safe port.

‘It was very difficult in Libya and I can’t even explain the joy I’m feeling today, it’s just incredible,’ Mohammad Irshad, a 22-year-old Pakistani, told AFP.