Iran will take a further step away from its nuclear deal by ramping up uranium enrichment at a secretive plant, the regime announced today.

The latest move, which comes just a day after Iran revealed it had doubled its supply of advanced centrifuges, is another violation of the faltering pact with the West.

Experts fear the technology could allow Iran to produce nuclear weapons within less than a year if it chose to do so.

However, Rouhani insisted today that Iran would resume its commitments under the deal if it gets the help it wants from European powers. 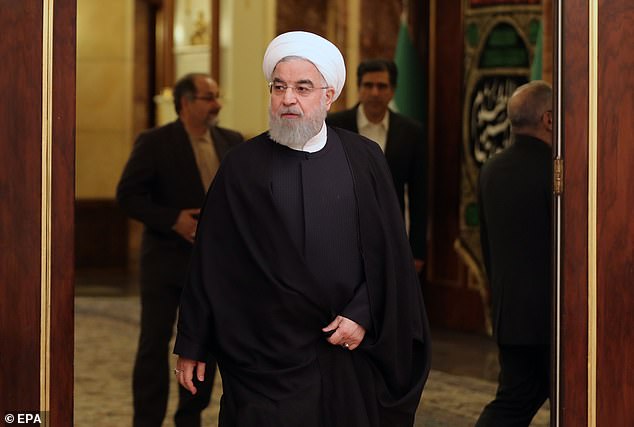 Iran has doubled its capacity to enrich uranium, the head of its nuclear programme announced today. Iranian president Hassan Rouhani is seen in Tehran last month

Some 1,044 centrifuges will be injected with uranium gas at the secretive nuclear facility in Fordow, Rouhani explained.

Iran had agreed to suspend enrichment at the plant near the holy city of Qom, but it will now resume as early as Wednesday, the Iranian leader said in an address carried by state TV today.

There was no immediate reaction from the International Atomic Energy Agency, a UN watchdog which monitors Iran’s compliance with the deal.

Yesterday the head of Iran’s nuclear programme announced that the country was now running 60 banned IR-6 centrifuges, twice as many as before.

The centrifuges can enrich uranium 10 times faster than the first-generation technology which Iran is permitted under the deal.

However, Iran is known to be using IR-6 centrifuges and Salehi said the country is now working on an IR-9 which would be 50 times faster than the IR-1.

Salehi, the head of the Atomic Energy Organization of Iran, boasted that the technology would show Iran’s ‘capacity and determination’.

Iran has already breached the limits on its enrichment levels and uranium stockpiles, and the latest steps leave the deal hanging by an ever more slender thread.

The pact began unravelling last year when President Donald Trump pulled the United States out of the pact negotiated by his predecessor, Barack Obama. 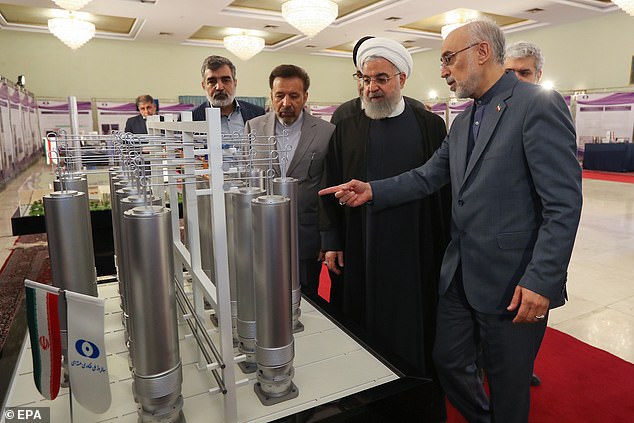 Washington reimposed sanctions against Iran which had been suspended under the agreement, crippling Iran’s economy.

Iran has pleaded for help from Europe to dodge the sanctions but efforts by Britain, France and Germany have largely proved unsuccessful.

Tehran has retaliated with a series of provocative steps to tear up the nuclear deal in the hope of forcing Europe to help.

On July 1 Iran said it had increased its stockpile of enriched uranium to beyond the 300-kilogram limit set by the agreement.

A week later, it announced it had exceeded the deal’s uranium enrichment level of 3.67 per cent.

Weapons-grade uranium needs to be enriched to around 90 per cent, but the time to get there is halved once it reaches 20 per cent.

In September, the UN nuclear watchdog said Iran was installing new IR-6 centrifuges and today the regime revealed it was using 60 of them.

The International Atomic Energy Agency (IAEA) said dozens of centrifuges had been installed or were being installed at the secretive Natanz plant in Iran.

The site’s existence was revealed by Western intelligence services and an exiled Iranian opposition group in August 2002.

Iran has denied ever seeking nuclear weapons, insisting its atomic programme is for entirely peaceful purposes.

On Sunday, Iran’s supreme leader ruled out fresh negotiations with Washington in a speech to mark the 40th anniversary of the 1979 Tehran embassy takeover that sparked a 444-day hostage crisis.

‘Nothing will come out of talking to the US, because they certainly and definitely won’t make any concessions,’ Ayatollah Ali Khamenei said.

The collapse of the nuclear deal coincided with a tense summer of mysterious attacks on Gulf tankers and Saudi oil facilities that the U.S. blamed on Iran.

It sent Middle East tensions escalating alarmingly as both Britain and America beefed up their military presence in the region.

Tehran denied any involvement in the explosions, although it did seize oil tankers and shoot down a U.S. military surveillance drone.

Experts have warned that a crisis in the critical Strait of Hormuz could endanger the world’s oil supply.

Trump called off air strikes against Iran at the last minute in June after the Islamic republic downed a U.S. drone.