By Anthony Galloway and Kate Geraghty 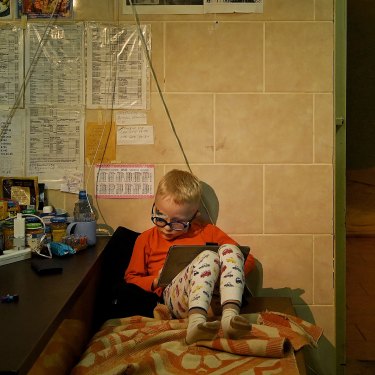 In the Kharkiv No 4 Emergency Hospital, three-year-old Viktor Baklanov sits in the basement, where he is sheltering with his father while his wounded brother Volodymyr is treated in one of the trauma wards. Credit:Kate Geraghty

In the besieged city of Kharkiv, where nobody can ever rest, seven-year-old Volodymyr Baklanov sleeps in tranquillity in his hospital bed more than a week after an attack that killed his mother.

The bandages on Volodymyr’s head cover the wounds where bullets struck the top of his skull. Apart from the bandages, a little scratch on his nose is the only evidence of the attack.

His uncle Sergei Baklanov watches over him. When Volodymyr’s eyes flicker open briefly, his uncle leans over to caress his cheek. 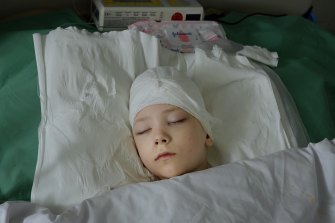 Volodymyr Baklanov was badly hurt in the same hail of gunfire that killed his mother. Credit:Kate Geraghty

This is Kharkiv Number 4 Hospital, a major trauma hospital on the front line of the invasion, in the heart of a city that has been bombed daily for a fortnight.

The hospital is bearing the brunt of the attacks, with 15 to 20 wounded civilians being treated every day. It is also the first aid point for wounded soldiers, before they are sent to a nearby military hospital.

All is calm in reception, where Sweet Dreams (Are Made of This) by the Eurythmics plays over the speakers. There is no sense of panic, just a few empty stretchers. But even inside the hospital, we hear artillery shots to the north as Ukrainian and Russian troops exchange fire. 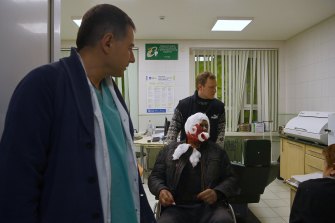 Fifteen to 20 wounded civilians, such as this man with facial injuries from a mine explosion, are rushed into the hospital every day. Credit:Kate Geraghty

We enter another room, and the war hits us hard in the face.

A man in a wheelchair has bloody bandages all over his pulsating face, as one of his swollen hands grasps onto a single white tissue. The doctors tell us he has just been injured by an exploding mine, before he is rushed off to surgery.

As the war rages outside, we are introduced in one of the intensive care wards to a nine-year-old boy with shrapnel wounds all over his face and an intubation tube in his mouth. He was hit by a rocket attack a few days ago and is still struggling to hold on to life. One hand is loosely tied to the bed to prevent him from moving in a panic when he wakes. 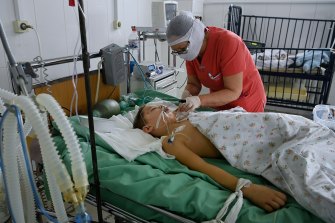 The nine-year-old boy’s wrist is tethered to the bed with some bandage to stop him flailing around when he wakes. He was severely inured when a mine exploded. Credit:Kate Geraghty

The Baklanov family still doesn’t know if they were shot by Russian or Ukrainian soldiers. It all happened on February 28, the fourth night of the invasion, and tensions were high.

Volodymyr’s mother Dariya was trying to move her two boys – Volodymyr and his three-old-old brother Viktor – from the Saltivka district on the firing line in the north-east to Sergei’s place in a safer part of the city.

The windows of their home had all been smashed; a Russian air strike had destroyed a building nearby.

When they came to a checkpoint, they were fired at. Dariya was shot directly in the head and killed instantly, while Volodymyr was struck in the same string of rapid gunfire.

“My wife was shot and she was killed, and my first child Volodymyr – he got shot in the head,” says the boy’s father, a 34-year-old engineer, who is now staying underground at the hospital.

“They were shot at by an automatic gun… I don’t know from whose side [Russian or Ukrainian] because that day was a very dangerous day – there was a lot of shooting.”

Asked what his message was for Russia, he said: “Stop the war”.

“Because it’s not only politicians who pay. Civilians struggle from this war. I want to work and live with my family and grow with my children, I don’t want war,” he says. 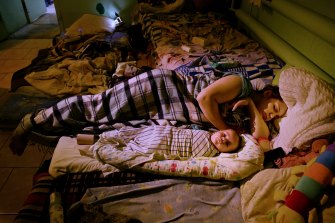 Stanislav, who did not want to have his photo taken, is one of about 1000 people – including patients, family and staff – who are currently staying in the hospital’s basement, which resembles an underground metro station.

Three-year-old son Viktor, who survived the attack without any physical injuries, sits on a bed in the hospital’s underground playing a game on his electronic tablet.

Everywhere in Kharkiv, there are long lines outside pharmacies and petrol stations. After a fortnight of daily shelling, many districts lie in ruins and over 300 residential buildings have no heating. The death toll is still unknown in a city with no time to count the dead. Stanislav fears the city is running out of medicine.

“We have a whole hospital of injured people, but without medicine,” he says. 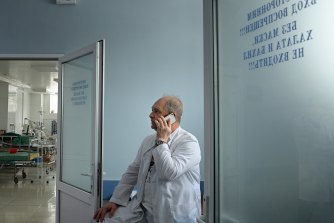 The hospital’s managing director of neurosurgery, Oleksandr Dukovskyy, says there are currently 55 civilians in the hospital who are being treated for trauma from rocket attacks and shelling.

“Rockets attack every day. Two days ago, we had a big rocket attack over all of the perimeter of the city Kharkiv,” he says.

“The Russian aggressor is shooting at civilian buildings where people live.”

He says the war is “shocking for my people and for my country”.

“In the hospital, every day and every night we jump in the operating room and we make first aid for soldiers and civilian citizens of Ukraine.” 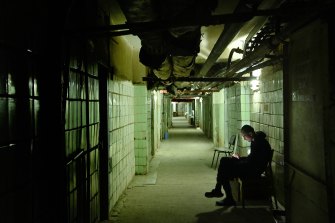 Sergei Baklanov and many other family members of the wounded are staying in the hospital’s basement while their loved ones are treated upstairs. Credit:Kate Geraghty

In the first surge of the invasion, Russian President Vladimir Putin painted the attack on Kharkiv, a city less than 40 kilometres from the border, as a liberation of its Russian speakers.

Sergei, like most of the residents who remain among the ruins, has no time for this: “We don’t need anyone to free us. We are a freed people. And we didn’t ask Vladimir Putin: Please save us, please free us!”

“I think it’s very stupid. It’s a pity, but I don’t think he [Putin] will stop. All the negotiations, everything… he won’t sign anything. He wants only for us to say ‘Ok, you win’, but we won’t say that. So, I don’t know when this war will stop.”