When Anthony Albanese and Joko Widodo rode bamboo bikes together at the Indonesian presidential palace in June, it reflected a shoring up of ties between Australia’s new government and one of its most important neighbours.

Albanese committed to attending the G20 leaders’ summit in November – which Indonesia is hosting in Bali this year – even though Russia’s Vladimir Putin has also been invited. 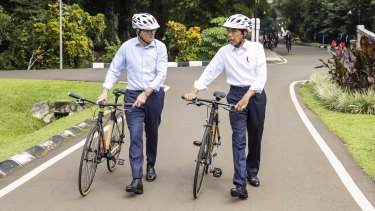 Anthony Albanese and Joko Widodo push their bicycles after their ride.Credit:Alex Ellinghausen

Indonesia’s protests against Australia’s submarine aspirations, however, present a long-term challenge for the relationship that will not be easily overcome.

Jakarta has outlined major concerns in a working paper presented to this week’s United Nations nuclear non-proliferation review conference and revealed by The Sydney Morning Herald and The Age.

It is seeking to close a loophole in the Treaty on the Non-Proliferation of Nuclear Weapons, known as the NPT, that clears the way for the AUKUS submarines deal to take place, saying new regulations in the treaty are required. Indonesia is adamant that the transfer of highly enriched uranium for military purposes poses great risks and nuclear energy for submarines should be “monitored tightly” by the UN watchdog.

The working paper does not specifically mention Australia or AUKUS, but there is no doubt about the intended target, according to Muhadi Sugiono, an academic who has advised Indonesia’s foreign ministry on its response to Australia’s submarine plans.

Officials in Jakarta were deeply wounded by the AUKUS announcement last September and their last-minute notice of the deal. Widodo was unavailable to see then leader Scott Morrison when he planned to stop over on the way back from Washington DC having announced the deal. The Indonesia leader reportedly refused to receive him.

“Making such an important decision, which will undoubtedly affect Indonesia as well as the geopolitical landscape of the region, without consulting or informing its closest neighbours was seen as a betrayal of the serious efforts which have been made to improve bilateral relations between Indonesia and Australia,” Sugiono, who is based at Gadjah Mada University in Yogyakarta wrote in a paper for the International Campaign to Abolish Nuclear Weapons (ICAN) published last month.

Malaysia is backing Indonesia’s submission to the UN conference and Jakarta is also endeavouring to win the support of fellow states in the Non-Aligned Movement, a Cold War-era grouping of 120 mostly African, Asian and Latin American countries that has been a voice for developing nations.

By definition, they are unlikely to all fall in together behind Indonesia and two of the largest members, India and Pakistan, are nuclear powers but non-signatories to the NPT. 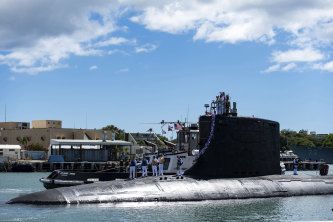 Sugiono argues Indonesia could have made a stronger case to convince other countries to join its cause if it had directly referenced Australia and AUKUS.

The submission was one of three on nuclear-fuelled submarines made to the conference. The others were a joint submission from the AUKUS countries Australia, the United States and the United Kingdom, and by China, a fervent opponent of the deal.

“By pointing at the actual case [Australia and AUKUS] we could build a strong argument to convince other countries that we must do something,” Sugiono said.

“The reason for not mentioning it since the beginning is perhaps that Indonesia does not want to disturb its relations with Australia.”

“I am not so optimistic because our working paper was not firm enough to express what we wanted.”

Even if Indonesia’s case for re-working the NPT fails its uneasiness is not going to go away.

A recent poll by Australia’s Lowy Institute indicated there was low public awareness of Australia’s submarine project in Indonesia – only 11 per cent of Indonesians had heard of AUKUS, with 28 per cent believing it would make their country less safe.

Indonesia’s anxiety has not morphed into a diplomatic flashpoint – and Australia has avoided another potential one by refusing calls to shut the border over a foot and mouth disease outbreak.

But Susannah Patton, the South-East Asia program director at the Lowy Institute, believes that while differences over AUKUS can be managed in the short term, Australia’s submarine ambitions stand to have lasting implications on its relationships with Indonesia and with others in the region.

“Those concerns [of Indonesia] are things that Australia should be worried about because it points to the fact that Australia and Indonesia have very different world views and that will have an impact on our long-term relationship,” she said.

Patton said Indonesia’s apprehension underscored the need for Australia to make a much greater effort in providing strategic reassurance to Indonesia as well as messages of deterrence to China. Australia needs to also do a better job of having meaningful consultation with Indonesia “not just on AUKUS, but on a whole range of deterrent capabilities that the ADF [Australian Defence Force] is going to be investing in,” she said.

Indonesia’s latest move, though, shows they will need a lot of convincing.