Amie Goodwin went into her fifth labor last week, days before Mother’s Day, with every reason to feel anxious.

Her fourth child, Romeo, was born very unwell in 2019 and spent five months in intensive care before passing away, an event that traumatised Ms Goodwin significantly. Friday would have been his second birthday. 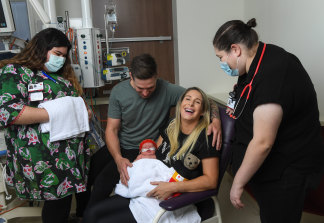 Ms Goodwin, an Indigenous woman who lives in Bendigo, says having been referred for this pregnancy to the Royal Women’s Hospital’s Baggarrook midwifery program made all the difference to her sense of wellbeing.

Under Baggarrook – which means “woman” in the Woiwurrung language – cultural traditions and practices are respected and care is given by Indigenous midwives or others with sufficient cultural education.

Mothers receive on-going pregnancy and birth care with one primary midwife with whom they can form a relationship. This has been shown to improve maternal wellbeing and birth experience.

“If it wasn’t for the Baggarrook program and the emotional support they also provided us, I don’t think we would have gotten through this pregnancy emotionally unscathed like we have,” says Ms Goodwin.

“It was a very emotional time for us with a lot of anxiety surrounding this pregnancy.”

Della Foster, professor of midwifery and maternity services research at La Trobe University and the Royal Women’s Hospital, says having a baby in a big hospital can be isolating, and it has been observed that prior to Baggarrook, Indigenous women did not attend as many visits during pregnancy, and came in later.

Professor Foster’s team is studying the impact of Baggarrook, but she says a Queensland-led study of similar models of care for Indigenous women found mothers had fewer pre-term births, fewer small babies and increased breastfeeding.

“We have been asking Aboriginal women their views and have had heaps of fantastic feedback … they say they have really been able to feel the safety and trust of being in the hospital, where they traditionally haven’t perhaps before,” she says.

“The women’s commitment to reconciliation is all the more important given our hospital’s past policies and practices and our role in the stolen generations, which saw the forced removal of Aboriginal and Torres Strait Islander babies from their mothers,” she says.

“It is with sincere regret that we apologise for the continued trauma, loss and grief we have caused Aboriginal and Torres Strait Islander women, their families, kinship and communities, as we ensure that the wrongs of the past are never repeated.”

Indigenous midwife Storm Henry, who works in Baggarrook, says she has seen how the program has helped Indigenous and Torres Straight Islander mothers-to-be.

“There’s lots of strong research evidence behind continuity of care for all women, but particularly for Aboriginal families in terms of closing the gap, [the benefits] are quite clear,” Ms Henry says.

“To get to know each other and develop a relationship helps them trust a system that historically hasn’t been very trustworthy. If you feel you’re really seen by the people looking after you, and you’re not seeing a different person every time, you feel like your care matters.”

As she prepared to both grieve for Romeo on his birthday and celebrate Mother’s Day with her four healthy children, including baby Kingston, Amie Goodwin says the freedom to be able to incorporate culture and traditions into pregnancy and the birth suite through her Baggarrook midwife Paras Loupis (who is not Indigenous but has had cultural education) “made a huge difference”.

“I love her,” says Ms Goodwin, “It’s almost sad that we’ve had our baby now and we’re breaking up. I don’t remember being scared through my whole labor [with Paras by her side]; she made a huge difference for us. I truly don’t think we could have gotten through this without her.”

Support for those who have experienced miscarriage, stillbirth or newborn death can get support through SANDS Australia.