India has leapfrogged China as the number one country of origin for foreign students in Victoria, as universities and student accommodation providers report a better-than-expected return of internationals arriving to study in Melbourne.

People from India make up a quarter of the 96,300 international student visa holders currently in Victoria, followed by those from China on 19 per cent and Nepal on 7 per cent. 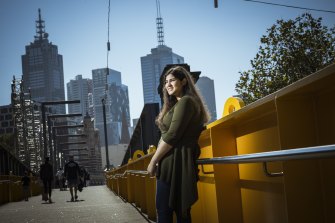 Sanskriti Wason is one of Melbourne’s large cohort of international students from India. Credit:Chris Hopkins

In March 2020, prior to the coronavirus pandemic, Chinese students accounted for just over 25 per cent of the state’s international student population, with India the second largest contributor at 24 per cent.

International education workers believe the stunted return of Chinese students is due to a combination of geopolitical tensions, tough COVID-19 and travel restrictions in their home country and the flexibility of online study.

Four weeks into most university semesters, the City of Melbourne says about 4000 international students are still arriving each week, as some students report delays in having their visa approved.

Gary Li is president of Education Consultants Association of Australia and leads AIDE education and migration, specialising in linking Chinese students to Australia.

Mr Li says Chinese students starting higher education were preferencing the United Kingdom because it opened its border earlier. The downturn was also, in part, due to the tense relationship between China and Australia amid ongoing trade tariffs, and more recently because of criticism over Beijing’s response to Russia’s war in Ukraine.

“Some return flights cost over $10,000 at the moment. I think you will only see the number of students grow once China opens its border and flights return to normal,” Mr Li said.

“In addition, the Chinese government changed its regulations to recognise online study degrees. As long as that remains, there will be a temptation to stay home.”

As many as 57 per cent of Chinese student visa holders remained outside Australia as of March 14, compared to just 9 per cent of Indian students, according to Department of Home Affairs data.

Sanskriti Wason arrived in Melbourne from her home city of Delhi less than a fortnight ago. The 18-year-old started arranging her psychology studies at RMIT soon after graduating from high school in August, and had to overcome several pandemic-induced difficulties.

“I missed the first two weeks of semester because I only just got my visa this month,” said Ms Wason, who has moved in with her older sister in Southbank.

“Then I had to get a PCR test before leaving India, and the question is always in your head: what if it’s positive, how long will I be delayed? And now I’m here, it’s navigating the offline and online classes. I’ve changed some of my subjects to avoid having to do online.”

She said she chose Melbourne because of its cultural diversity and welcoming people.

“I knew Melbourne had a huge Indian community, which [gives] a nice feeling of home away from home. I’ve joined the RMIT Indian club, where we can all relate to each other, even if we’re from different states,” Ms Wason said.

The federal government has introduced a series of sweeteners to lure international students back to the country, including waiving the $630 visa application fee and removing the 40-hour-a-fortnight cap on working hours until at least next month.

UniLodge Melbourne City, a 51-storey, 900 bed building that opened this year, is already at 74 per cent occupancy, while UniLodge near Royal Melbourne Hospital was at 71 per cent.

About 7 in 10 students are foreign, led by China on 18 per cent and 14 per cent from other Asian nations. Pre-pandemic, Mr Fell said Chinese students made up about 30 per cent of residents.

“The advice we get from booking agents is the border rules are the big barrier,” he said.

“There was a lot of discussion about the sector over the past two years. It’d be naive for us not to have thought about potentially finding alternatives uses for our buildings. But demand is strong, particularly in Melbourne, which I believe answers any of those questions.”

PriceWaterhouseCoopers’ modelling from 2020 found that for every dollar students spent on tuition fees, they contributed $1.15 to the state economy, in what was a $13.7 billion industry in 2019.

Lord Mayor Sally Capp has been pushing hard for the return of students, who made up 38 per cent of CBD residents before the pandemic.

“Melbourne has missed its international student population, as workers, as customers, as friends and as valued members of our community,” she said.

“You can feel the buzz in the city building, particularly around those key university centres, as both domestic and international students return to on-campus learning.”

Victorian universities said exact enrolment numbers would only be known after the higher education census date of March 31.

However, La Trobe said more than 1000 new students had started this semester, “well above our expectations” and double last year’s figures. Business, nursing and education are most popular among international students.

At Melbourne University, where the international contingent has increased by 2000 to 23,000 compared to the end of last year, health sciences, commerce, engineering and IT are most in-demand.