Transition officials for Biden have called on a top Trump administration appointee to end what they said was unwarranted obstruction of the money and access that federal law says must flow to the winner. 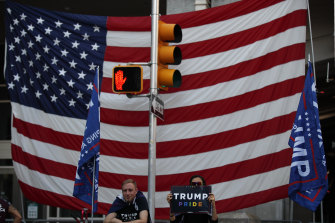 The officials, speaking on background to reporters, said it was nearly unprecedented for Emily Murphy, the administrator of the General Services Administration, to refuse to issue a letter of "ascertainment", which allows Biden's transition team to begin the transfer of power.

By law, Murphy, the head of the sprawling agency that keeps the federal government functioning, must formally recognise Biden as the incoming president for his transition to begin. It has been three days since news organisations projected that he was the winner of the election, and Murphy has still not acted.

The transition officials said her inaction was preventing Biden's teams from moving into government offices, including secure facilities where they can discuss classified information. The teams cannot meet with their counterparts in agencies or begin background checks of top Cabinet nominees that require top-secret access.

Trump's refusal to concede has already affected Biden's transition, particularly on national security and other issues. 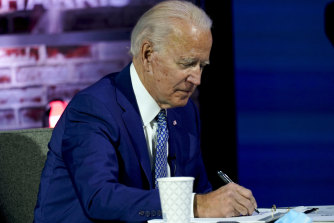 President-elect Joe Biden takes notes during a meeting with his COVID-19 advisory council on Monday.Credit:AP

Trump can prevent Biden and his aides from receiving the presidential daily briefing, the compendium of the government's latest secrets and best intelligence insights, for the entire transition. No law states that Biden must receive it, although under previous administrations dating to at least 1968, presidents have authorised their elected successors to be given the briefing after clinching victory.

Previous presidents considered it good governance, said David Priess, a former CIA officer and the author of The President's Book of Secrets, about the daily brief.

"As with so many norms and traditions, it is hard to say it will happen with this President," Priess said.

Trump's indifference to norms is a central theme of his presidency, making him unlikely to begin following them now that he has lost the election. 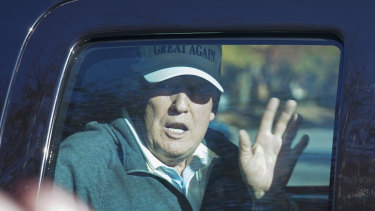 President Donald Trump waves to supporters as he departs after playing golf on Sunday.Credit:AP

In the aftermath of the contested 2000 election, while Florida were disputed in court, then president Bill Clinton authorised George W Bush to receive the briefing. As vice-president, Al Gore already had access to the intelligence.

A White House official pointed out, as several Trump allies have, that the 2000 transition was delayed over several weeks. The official said it would be strange for Trump to send a signal to allow the transition to start while he was still engaged in court fights.

But Biden's aides said that the dispute in 2000 involved one state with only about 500 ballots separating the winner and loser, far less than in the current contest. In every other presidential race for the past 60 years, the determination of a winner was made within 24 hours, they said — even as legal challenges and recounts continued for weeks.

Along with the presidential daily briefing, transition team officials need to have access to classified information from intelligence agencies, like the CIA, to make staffing decisions and begin planning for the administration.

On this front, Trump can make it much more difficult for the Biden team to gain access to those materials. Under law, the Trump administration must formally recognise Biden as the President-elect to share classified information with his team. As long as Murphy refuses to recognise Biden, the team cannot legally view the materials.

Former vice-presidents like Biden do not receive full-time Secret Service protection, but Biden has had a protection detail since earlier this year. The Secret Service also extended the no-fly zone over him home to cover an entertainment complex in downtown Wilmington, Delaware, where he addressed the nation on Saturday night.

But if the Trump administration — through the GSA — continues not to recognise Biden, it is likely to stymie the typical transition that occurs between Biden's temporary security detail and the one specifically devised to protect presidents, known as the Presidential Protection Division.

Under previous administrations, the Secret Service has had the two teams begin working together during the transition with the incoming president's detail becoming increasingly made up of Presidential Protection Division agents and officers as Inauguration Day approached. Such a hand-off requires significant resources and changes in personnel work hours, and former agency officials say the Secret Service is highly unlikely to begin that transition unless the GSA has authorised it.

A Biden transition official told reporters on a call that it was time for the GSA to act, and the transition team would consider legal action if the authorisation was not granted.

"Legal action is certainly a possibility, but there are other options as well that we're considering," said the official, who spoke on condition of anonymity, declining to outline other options.

Understand the election result and its aftermath with expert analysis from US correspondent Matthew Knott. Sign up to The Sydney Morning Herald‘s newsletter here, The Age‘s here, Brisbane Times‘ here and WAtoday‘s here.