This is the heartwarming moment a deaf boy bonded with a Disney World performer through sign language.

Five-year-old Caleb, who was adopted three years ago, visited Disney World in Orlando, Florida, with his family on Valentine’s Day.

Footage shows the performer, dressed as Joy from the 2015 film Inside Out, kneel down to Caleb. 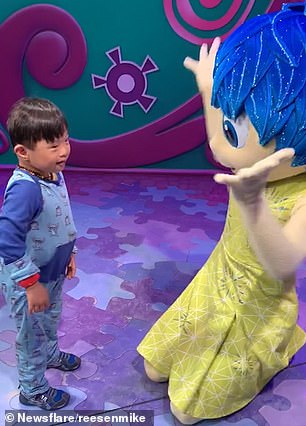 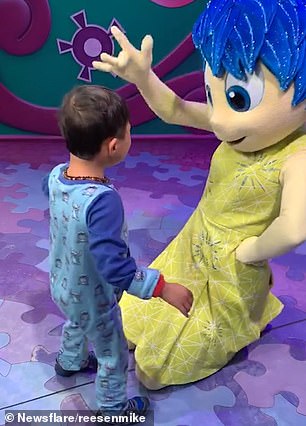 Five-year-old Caleb (left) approaches the performer at Disney World, Florida. The performer, dressed as Joy from film Inside Out, reaches out for a hug (right)

The video shows Joy signing to Caleb who is fascinated by the character before he reaches out to hug her.

Mother Clarissa Bradford is heard cooing over the sweet embrace as the performer Joy blows a kiss to Caleb.

She adds: ‘Oh my God – this is the first character that has signed!

The film is set in the mind of an 11-year-old girl named Riley where five personified emotions with the character Joy played by American actress Amy Poehler.

Speaking about the touching moment Ms Bradford said: ‘We were given an amazing trip to Disney World and this was the most magical experience for him!

She added: ‘When she started signing they bonded instantly.

‘There was so much more I didn’t catch because I was in awe and in the moment. This joy completely blessed our family.’