Head of English at £36,000-a-year Windermere School lost her job after telling pupil ‘we worried you were going to die’ in front of classmates, tribunal hears

A senior teacher at a top private school rocked by teenage suicides lost her job after telling a pupil in front of classmates ‘we were worried you were going to die’, a tribunal heard.

Katie O’Hara, head of English at £36,000-a-year Windermere School, ignored advice to avoid teaching texts featuring suicide — and even upset another pupil by instructing her class to rip a sensitive page out of a book mid-lesson.

This came just weeks after two 14 year old students took their own lives at the end of 2019 — leaving the school community concerned about a possible ‘cluster’ of suicides kicking off.

An employment tribunal found that Ms O’Hara, who joined the 159-year-old school in 2015 with more than 17 years’ experience as an English teacher at ‘well-regarded’ private schools, was not unfairly dismissed.

She gave written notice of her resignation in October, 2020, claiming she had left due to a bad working environment — although concerns had already been raised about her ‘erratic behaviour’.

In the term following the tragedies, Ms O’Hara, who became head of English in 2018, planned to teach Antigone.

This Ancient Greek tragedy by playwright Sophocles features several deaths by suicide as part of the story. 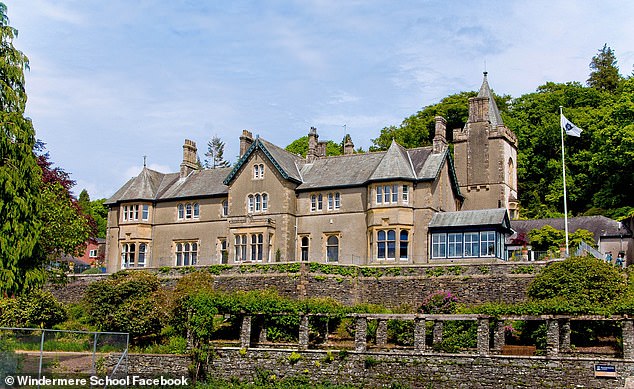 Windermere School, where Head of English Katie O’Hara lost her job at the £36,000-a-year school after telling a pupil ‘we worried you were going to die’ in front of classmates, is pictured

The tribunal heard she was instructed to choose ‘another book altogether’ by headteacher Ian Lavender, who told her: ‘For obvious reasons, no texts studied for the rest of this academic year to any year group should mention suicide or death by hanging.’

Despite this, Ms O’Hara intended to go ahead and teach the text — and a pile of Antigone books were spotted ‘ready to go’ out to students, the panel was told.

During a lesson on 2007 novel The Reluctant Fundamentalist by Pakistani author Mohsin Hamid, Ms O’Hara instructed her students to tear out a page which featured discussion of suicide — upsetting one female student so much she left the class.

Following the suicides, a warning system picking up on concerning internet material being accessed by students had been installed on the school’s computer, the hearing was told.

After an alert was triggered by one pupil’s search for Star Wars memes, Ms O’Hara entered the classroom he was located in, where he was being taught by Elizabeth Loughlin.

In the quiet of the room, she asked the boy if he was okay and said ‘we were worried you were going to die’ — words the other teacher and the students could all hear.

Following this incident, the school’s headteacher said in an email to Ms Loughlin: ‘It is my expectation that [Ms O’Hara] does not come to school on Monday.

‘If she does, I will send her away again.’

A boarding and day school for pupils aged 3-18 years old, Windermere School was ‘profoundly’ impacted by the suicides of the two 14-year-old students — Pierre DaCosta Noble and Fionnuala Ryan.

An inquest heard Pierre — a boarder — had been a victim of bullying, and took his own life after classmates smeared faeces into his pillow and inside one of his boots.

He was found by two senior pupils.

Pierre had confided in Fionnuala about the bullying, who was also seriously affected by the suicide of her classmate. Weeks later the schoolgirl, described as one of the school’s ‘shining stars’, was found dead at home.

Following the tragedies, suicide prevention charity Papyrus was called in to help staff in teaching students ‘in a way that kept them safe and enabled their education to continue without it (and them) being overawed’.

French-born Pierre DaCosta Noble was found hanged on the grounds of the prestigious Windermere School in the Lake District on November 9. Pierre had confided in classmate Fionnuala Ryan about the bullying, who was also later found dead at home

However, the tribunal heard that concerns were raised about Ms O’Hara’s behaviour and whether it was ‘in keeping with the advice provided and instructions given about teaching’ at the school following the two suicides.

According to Ms O’Hara, who claimed unfair dismissal, she had been treated detrimentally at meetings after raising concerns about the approach other teachers were taking towards upcoming International Baccalaureate examinations.

She also took issue with a disciplinary investigation meeting she was invited to, and alleged that Ms Loughlin, a fellow English teacher, attempted to pressurise Ms O’Hara to leave so she could move into the head of faculty role.

She went on sick leave from January, 2020, until her employment ended in April, 2021 — but told the tribunal Windermere School had refused to give her full pay in the second six months of her absence despite her mental health breakdown being the direct result of the school’s treatment of her.

Ms O’Hara argued this decision amounted to a failure to make reasonable adjustments for her, and was discrimination relating to her disability.

After her grievances were dismissed by the school, Ms O’Hara launched an appeal, which was also rejected — leading her to say ‘her trust and confidence in the School had been “completely eroded.”’

All of O’Hara’s claims against Windermere Educational Trust and her colleagues were dismissed by the tribunal, which ruled that the school did not unlawfully discriminate or fail in its duty to make reasonable adjustments for her.

Windermere School, founded in 1863, was named Sunday Times International Baccalaureate School of the Year for 2017-2018 and is a member of Round Square and the Society of Headmasters & Headmistresses of Independent Schools.

The school’s website has a Wellbeing tab, with information about where students can go if they need help with their mental health.