Harry and Meghan drop MORE Netflix footage: Duke and Duchess of Sussex relive their first wedding dance when they did the mashed potato to 1960s hit The Land of 1,000 Dances as royal row over their tell-all show deepens

Harry and Meghan have revealed that their first dance as husband and wife was to the iconic 60s hit Land of a Thousand Dances, in a new clip from their explosive Netflix series.

Speaking about their 2018 wedding, the Duchess of Sussex says in an interview for the bombshell documentary: ‘I just really wanted the music to be fun. Even our first dance.’

Meghan then turns to Harry and asks: ‘Song of 1,000 Dances? A thousand dances? I always get it wrong.’

The clip then shows a series of photos of Harry and Meghan dancing at their wedding, with each other and VIPs including pop legend – and Princess Diana’s friend – Sir Elton John.

The Duchess then sings lyrics from the 60s soul hit Land of a Thousand Dances, first recorded by Chris Kenner in 1962 then later became a bigger hit by Wilson Pickett and Cannibal & the Headhunters.

THIS IS A BREAKING NEWS STORY. MORE TO FOLLOW 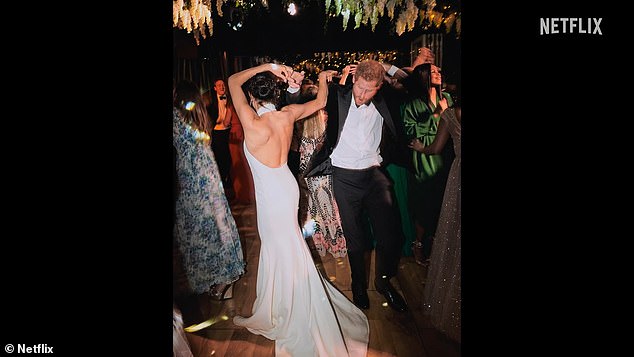