New York: A guide fishing just west of Yellowstone National Park in Montana has died after the was attacked by a large grizzly bear that might have been protecting a moose carcass, local authorities said. 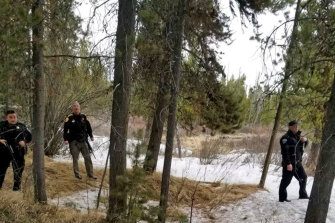 Officers search the site of the grizzly bear mauling just outside Yellowstone. Credit:AP

The victim, 40-year-old Charles Mock from West Yellowstone, was carrying a fishing pole and bear mace when he was attacked by what Jacobsen described as a large older male grizzly bear.

Emergency responders arrived within 50 minutes of Mock calling 911 for help and saw the bear, Jacobsen said. He was taken to Idaho Falls for treatment but died of his injuries on Saturday (Sunday AEST).

On Friday, park officials sent seven game wardens and bear specialists to investigate the area where Mock was attacked.

“They yelled and made continuous noise as they walked” to scare any bears away, a process referred to as hazing, park officials said in the statement. Then the bear charged at them.

“Despite multiple attempts by all seven people to haze away the bear, it continued its charge,” park officials said.

The bear was shot and died about 18 metres from the group.

Later, officials found what they believe might have been the source of the bear’s behaviour: a moose carcass cached near where Mock was attacked.

“Bears and grizzly bears, in particular, are very protective of their food source once they’ve claimed it,” Jacobsen said. “If they feel that that claim is under threat, they will defend it and they’ll stay nearby.”

The bear’s behaviour on Friday and its proximity to the initial attack, he said, “made us certain that this is the same bear.”

In Idaho, Mock underwent two surgeries that went well, according to a Facebook post from his employer, Backcountry Adventurers, which provides snowmobile rentals and tours of the park.

But on Saturday, the Gallatin County Sheriff’s Office in Montana announced Mock had died at East Idaho Regional Medical Centre.

Backcountry Adventures said Mock had “suffered a massive stroke” and his death “comes as a terrible shock and is heartbreaking”.

According to the National Park Service, since 1979, Yellowstone has hosted over 118 million visits. During that time, 44 people have been injured by grizzly bears in the park.

Grizzly bears in the continental US are listed as threatened under the Endangered Species Act. That designation means it is illegal to harm, harass, or kill these bears, except in cases of self-defence or the defence of others, according to the US Fish and Wildlife Service.

In 2017, the US Fish and Wildlife Service removed those protections for grizzly bears when it took them off the endangered list. A year later, a federal court forced the agency to put them back on the list. In 2020, a federal appeals court in San Francisco upheld that lower court’s ruling, protecting approximately 700 grizzly bears living in the Greater Yellowstone Ecosystem, which includes 88,000 square kilometres in parts of Montana, Idaho, and Wyoming.

Jacobsen said the Greater Yellowstone Ecosystem had a growing grizzly bear population and the site where Mock was attacked was “fairly close to the epicentre of growth”.

Jeremy Kopp, undersheriff in Gallatin County, referred to the Greater Yellowstone Ecosystem simply as “grizzly country.” In a brief interview Monday evening, he warned people in the area to be alert, especially around this time of year.

“[Grizzly bears] spent a long winter in hibernation,” he said. “Now they’re out and slowly coming back to life and feeding.”