GCSE pupils face ‘Wild West’ battle for sixth form places: Grade inflation due to exams being axed will see record haul of top marks today with poorer pupils most likely to miss out on moving up to A-levels

1million GCSE students will today receive their results with record numbers getting top marks just days after rampant grade inflation in A-levels and seething anger that private school children are racing further ahead of  their many ‘have-not’ state counterparts.

Teenagers trying to get places at sixth-forms and colleges face an unprecedented battle with each other for A-level places as state schools become increasingly selective over who they admit for the next two years.

Almost one in three GCSE entries will get top results today as ministers consider an overhaul to stop grades becoming meaningless and degraded because exams were cancelled and teachers had the final say. Ministers will examine changes to grading in the autumn to restore faith in the A-level and GCSE systems, with Gavin Williamson being tipped to be sacked by Boris Johnson.

A new top grade of 10 could be introduced to the current 1-9 system in future, to allow the very brightest students to shine. A record 29 per cent of entries are expected to get at least a 7 – equivalent to the old A – and around 10 per cent will get a 9, which is a high A*.

Experts have predicted today’s results will be like the ‘wild west’ for those applying to sixth forms because grades are so high with the gap between private and comprehensive schools expected to dominate debate again.

Lee Elliot Major, professor of social mobility at Exeter University, has said some popular state sixth forms have set such high entry requirements some students will now be excluded from staying on.

He said: ‘My worry is for pupils who may have just missed out on grades, which can determine whether you get a sixth-form place and what A-level subjects you can study.

‘Sixth-form admissions are the Wild West of the education system, with every sixth-form determining its own selection criteria. A particular concern for me are the prospects of poorer pupils who will not necessarily be backed up by sharp-elbowed parents.

At the heart of the row will be whether children were properly served by their schools during the pandemic after it emerged 700,000 comprehensive pupils got no home lessons at all.

In contrast private school students received around six hours per day while at home, with Britain’s ‘heavily unionised’ state schools accused of failing students, especially from the poorest backgrounds. A new top grade of 10 could be introduced to the current 1-9 system in future, to allow the very brightest students to shine (stock image)

At one point the National Education Union issued guidance to state schools warning online lessons should be kept ‘to a minimum’. Dr Mary Bousted, the union’s joint general secretary, said: ‘Teachers cannot be working as though they are sat in front of a class, and children cannot be expected to be able to study full time with online resources.’

Tory MP Andrew Bridgen, who has campaigned for a level playing field between comprehensives and private schools, told MailOnline yesterday that state education was let down by unions and teachers during the pandemic.

Asked about the disparity in lockdown lessons between state and private counterparts he said: ‘It was all entirely predictable. You could see it coming a mile off. In the private sector there were Zoom lessons throughout the day. There is no reason why this couldn’t have been the same in state schools but it didn’t happen and once again children, often in the poorest areas of the country, have lost out’.

Amid claims the grading for GCSEs could be changed again, a government source said a new grade 10 was ‘possible’ and had not been ‘ruled out’.

They added: ‘It’s a discussion that’s yet to be formally framed, but there will be conversations about changing the grading this autumn.’

It comes as half a million pupils collect their GCSE results this morning after exams were cancelled for a second year in a row due to the pandemic.

Teachers have decided the marks, meaning grading will be the most generous in recent history – leading to accusations of the qualifications being devalued. 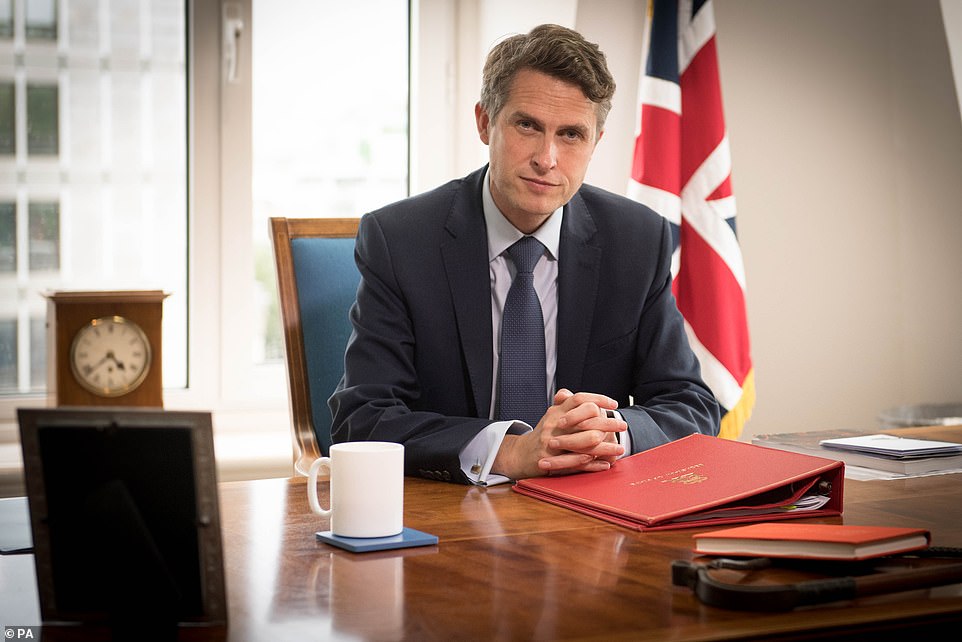 However, last night Education Secretary Gavin Williamson defended the results, saying they had ‘value’ despite the grade inflatio

Education expert Alan Smithers, of the University of Buckingham said: ‘We have a scale that has lost its meaning as we have people continually being given 9. Adding a 10 isn’t a bad idea as it would be a good new label for outstanding performance.’

However, last night Education Secretary Gavin Williamson defended the results, saying they had ‘value’ despite the grade inflation.

He said: ‘Students and their teachers should feel immensely proud of what they have achieved. I want to be clear – this is a moment to celebrate our young people and their futures.’

Labour is calling on the Government to do more to address lost learning during the pandemic, with the party estimating that more than half a million Year 11 students receiving their GCSE results on Thursday will leave secondary school without receiving catch-up support.

On a visit to a school in Swindon to meet students receiving their GCSE results, Sir Keir Starmer is expected to say the current plans to catch up on lost learning ‘risk holding back a generation of kids’.

Sir Kevan Collins, the former education catch-up commissioner, quit his role in June over the Government’s proposal of a £1.4 billion fund to help children recover missed lessons, describing it as ‘a bit feeble’ – he had proposed a £15 billion recovery package.

The Labour Party says that face-to-face teaching lost this year amounts to more than eight weeks per pupil, in addition to an average of 14 weeks last year, with some groups such as pupils on free school meals and those in the north of England being disproportionately affected.

Labour estimates 560,000 year 11 students are leaving secondary school this summer without catch-up support, and says that is set to rise to 1.9 million children by 2024.

The party is calling on the Government to match Labour’s children’s recovery plan, which it says would provide a £15 billion package, including small group tutoring, breakfast clubs, mental heath support, more professional development for teachers, and extra investment to support the pupils who struggled the most with lockdown learning.

On his visit to a school in Swindon, the Labour leader, Sir Keir, is expected to say: ‘These young people are excited for their futures and every one of them must be allowed to reach their potential.

‘Yet the Conservatives are failing to give children the support they need to catch up on lost learning. They risk holding back a generation of kids.

‘Labour’s Children’s Recovery Plan would give every child the support to learn, play and develop after this pandemic, delivering them a brighter future.

‘It’s time for the Conservatives to get behind Labour’s plan and match our ambition for children’s futures.’

Labour’s shadow education secretary, Kate Green, said the Government’s recovery plan for students is ‘inadequate’ and ‘will leave millions of children without any additional support, showing a shocking lack of ambition their future ambitions and life chances’.

A Government spokesperson said: ‘We have committed to an ambitious and long-term education recovery plan, including an investment to date of over £3 billion and a significant expansion of our tutoring programme, to support children and young people to make up for learning lost during the pandemic.’