A woman stormed into a wedding ceremony in Zambia and demanded that it be stopped – because the groom was her husband.

Abraham Muyunda allegedly gave his wife the slip by telling her he was heading out of town for work, before heading to the altar with his new bride-to-be.

But his wife got wind of the plan from the groom’s neighbours, according to the Zambian Observer, and rushed to the church to call a halt to the ceremony.

Widely-shared footage reveals how she marched up the aisle and dramatically told the congregation: ‘This wedding can’t go on… this man here is my husband’.

The woman’s announcement caused gasps among the congregation while the groom looked on with his hand on his chin and the bride offered no reaction.

The man’s alleged wife, who had a face mask hanging off her face, then argued with a woman in a front pew before going to remonstrate with a clergyman.

‘This man is my husband. We haven’t divorced,’ she told him, adding that ‘we never quarrelled… I don’t know what is happening here’.

The woman appeared to be carrying a baby in a papoose strapped to her back, and reportedly had her other children in tow.

Local media says the ceremony was taking place in a Roman Catholic church in Chainda, an area of the capital Lusaka.

The footage cuts out before the argument is resolved, but reports claim the groom was taken to a police station while the family discusses how to respond. 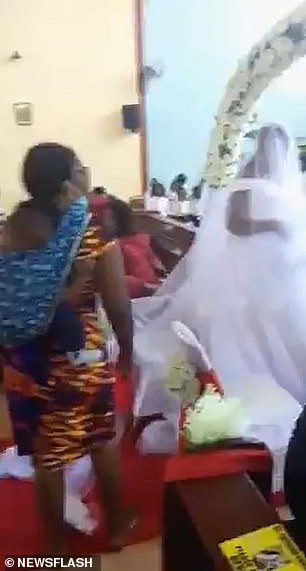 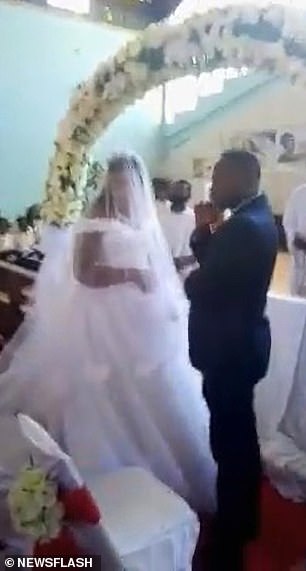 Footage shows the dramatic moment a woman (left) interrupts a wedding ceremony in Zambia, claiming the man is her husband. The man in question (seen above left with his bride) has been named as Abraham Muyunda and is reportedly in police custody

The bride is said to have known that Mr Muyunda was married, while the groom could be charged with bigamy, local media says.

According to the UN, Zambia has two different marriage systems, one based on customary law and the other on modern statute law.

The second type does not allow for polygamy, and anyone who tries to get married under statute law when they already have a husband or wife is liable to prosecution.

If convicted of bigamy, Muyunda could face up to seven years in prison.