When the magnitude of what he had achieved struck him, 19-year-old Queenslander Mick Fanning could muster only seven words: ″⁣To win at Bells, it’s just ridiculous.″⁣

And that, in essence, was his victory speech. Apart from a few brief thank yous there was no more he could summon for the thousands gathered in the glorious sunshine at Bells Beach yesterday. 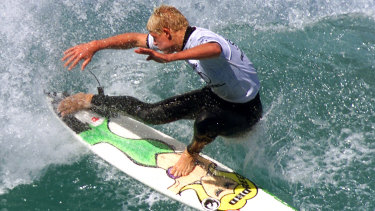 Fanning enjoys life, for he knows something of the alternative. Almost three years ago his older brother Sean and a close friend were killed in a car accident on the Gold Coast where the brothers grew up and where Mick still hones his incredibly slick, new-school surfing repertoire.

The Australian surfing community has a deep reverence for the Easter surfing contest, which has been held at Bells for 29 years and is now the country’s only elite world championship tour event. Nearly all of surfing’s modern greats have won the contest.

Fanning’s victory, by 1.7 points in excellent 1.5-metre surf, was a triumph born out of the most unlikely circumstances. Fanning is yet to qualify for the elite tour and competed at Bells with a wildcard tucked into his wetsuit. 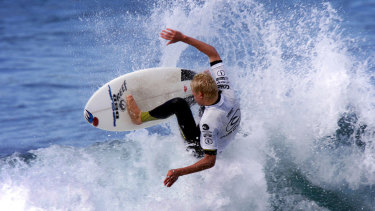 Until yesterday, only one other world championship event had ever been won by a wildcard entrant, a fact Fanning was aware of as he stood on the podium trying to express how the win meant so much more than the $US30,000 ($A58,973) prizemoney.

He couldn’t and ″⁣ridiculous″⁣ was perhaps too modest a description to believe. But he could have said ″⁣extraordinary″⁣ and ″⁣miraculous″⁣. Terms certainly to be believed.