Dunkirk rescue for dozens of migrants: French navy helicopter is scrambled as 37 get trapped on sandbank on Channel coast while trying to start illegal crossing to England

Dozens of migrants were dramatically rescued off the French coast on Monday – including 37 who were trapped on a sandbank and had to be airlifted to safety in a race against the rising tide by helicopter.

A French naval helicopter had just 20 minutes to rescue the group before the sandbank was submerged underwater.

It made successive sorties picking up the group and transferring them to the safety of the shore.

And a further 55 people including 10 women and two children had to be brought back into port after the boat they were packed onto got into difficulties.

In a dramatic picture released by French coastguard migrants can be seen running towards a French naval search and rescue helicopter which landed on the sandbank.

Another 31 people had to be rescued after two other boats also got into difficulties on Monday. 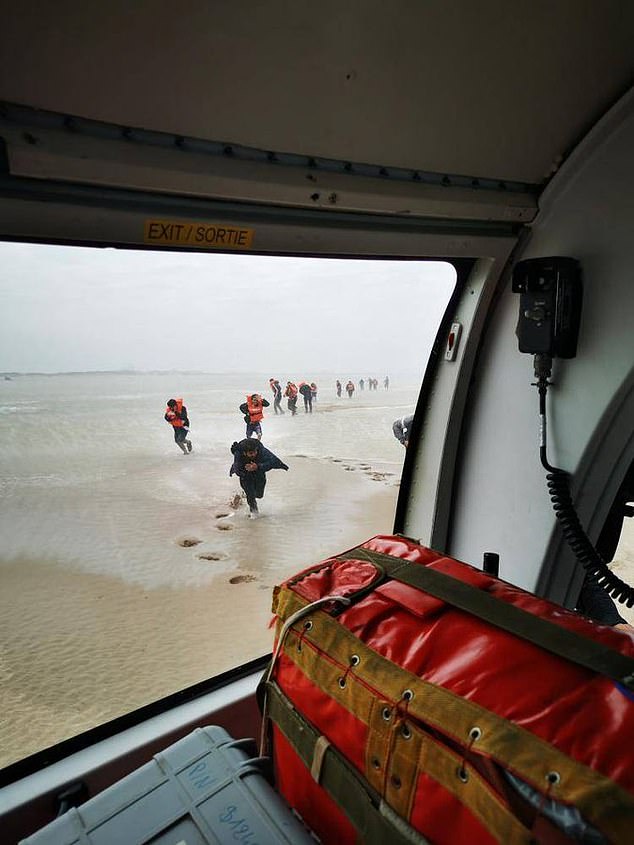 In a statement the French Préfecture Maritime covering the English Channel and North Sea said the CROSS Gris-Nez surveillance centre was contacted by the boat signalling itself in difficulty off Dunkirk.

A Dauphin helicopter of the French Navy based in Le Touquet and a speedboat of the French lifeboat service SNSM out of nearby Gravelines were scrambled.

But the boat could not get close enough to to the sandbank so the helicopter had to repeatedly land to pick up the group.

They said: ‘The 37 castaways were stranded with their boat on a sandbank, and isolated by the rising tide.

‘The SNSM not being able to access the bank, the helicopter of the French Navy proceeded to transfers by successive landings from the sandbank to the mainland, but must proceed to the hoisting of the last five castaways – the water having completely covered the beach in less than 20 minutes.’