Finland PM says Europe is ‘not strong enough’, blasts the EU and Germany for cosying up to Putin and warns against depending on authoritarian states such as China

Finnish Prime Minister Sanna Marin on Friday offered a ‘brutally honest’ assessment of Europe’s defence capabilities, stating bluntly that ‘we’re not strong enough’ to stand up to Moscow alone before warning against dependence on China.

‘We should make sure that we are stronger,’ Marin said in Sydney on Friday, before adding: ‘I’ll be brutally honest with you, Europe isn’t strong enough. We would be in trouble without the United States.’

She went on to say Europe has ‘become far too dependent on cooperation with regimes that do not share our common values’, using Finland’s reliance on Russian energy as an example, before turning to China.

The Finnish leader described trade with China as a ‘reality’, adding that ‘we all have worries when it comes to China’ and that the EU ‘must make sure that we don’t have that kind of critical dependencies’ when dealing with Xi Jinping’s government. 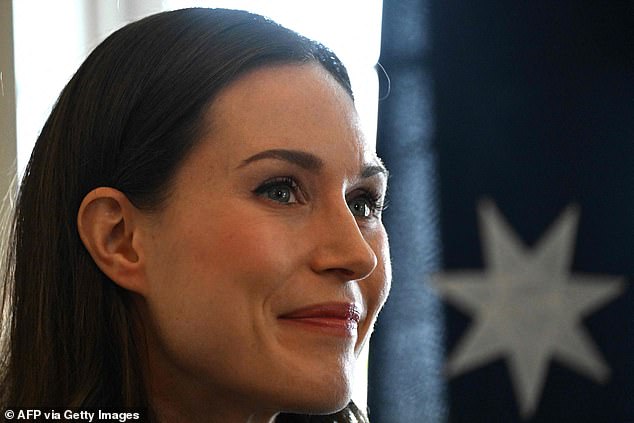 Finnish Prime Minister Sanna Marin on Friday offered a ‘brutally honest’ assessment of Europe’s defense capabilities, stating bluntly that ‘we’re not strong enough’ without the US

‘Our dependencies are becoming our weaknesses faster and in more important areas of our societies than we would like to happen,’ she said.

The 37-year-old Finnish leader decried European Union policies that had stressed the importance of engagement with Putin and said the bloc should have listened to member states who were part of the Soviet Union before it collapsed.

Since joining the European Union in 2004, countries such as Estonia and Poland have urged fellow EU members to take a tougher line on Putin, a stance tempered by France, Germany, Italy and Greece — which favoured closer economic ties with Moscow.

Marin insisted Ukraine must be given ‘whatever it takes’ to win the war, adding that the United States had been pivotal in supplying Kyiv with the weapons, finance and humanitarian aid necessary to blunt Russia’s advance. 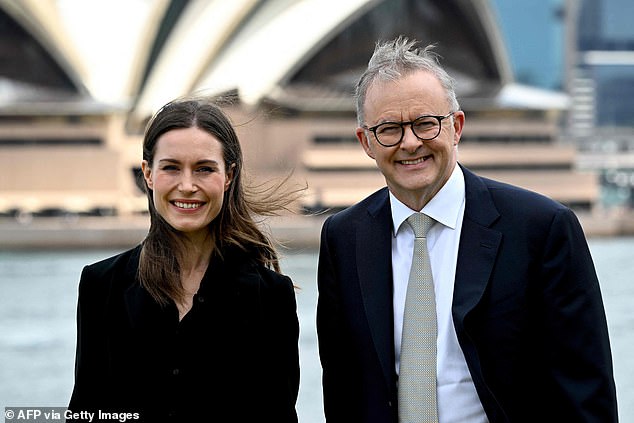 Ms Marin, pictured with Australian Prime Minister Anthony Albanese, was speaking in Sydney at the end of the first-ever visit by a Finnish prime minister to Australia and New Zealand

Finland won independence from Russia almost 105 years ago and inflicted heavy casualties on an invading Soviet army soon after despite being hugely outgunned.

‘We should have listened to our Baltic and Polish friends much sooner,’ Marin said.

‘For a long time, Europe was building a strategy towards Russia to closen our economic ties, to buy energy from Russia… we thought that this would prevent a war.’

Marin added that this approach had been ‘proven entirely wrong’.

The pipeline, designed to double gas imports from Russia to Germany via the Baltic Sea, was shelved in the days leading up to the invasion.

Ms Marin was speaking in Sydney at the end of the first-ever visit by a Finnish prime minister to Australia and New Zealand.

Australia’s pursuit of a free trade deal with the European Union was also on the agenda.

Ms Marin used her speech to urge democracies to ramp up sanctions against Russia. 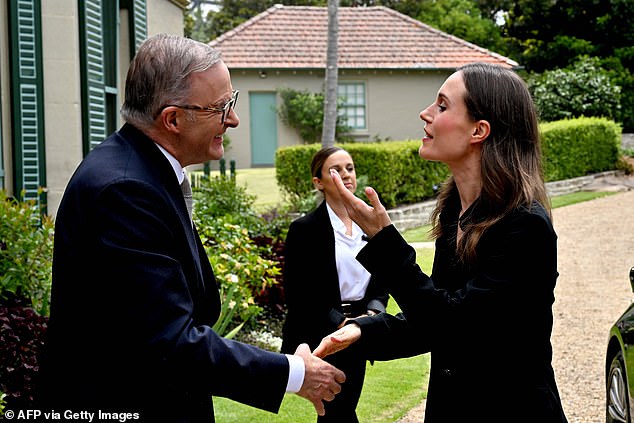 Ms Marin is pictured meeting Mr Albanese later at his official Sydney residence. The pair released a joint statement saying their talks ‘underlined the need to work together in strengthening their resilience as open and democratic societies

She told the Lowy Institute international policy think tank: ‘Make no mistake — if Russia wins its terrible gamble, it will not be the only one to feel empowered. Others will also be tempted by the same dark agenda.’

A free trade agreement being finalised between the European Union, which includes Finland, and Australia was an opportunity to develop resilient supply chains, she said.

‘We cannot be dependent, for example, on microchips or semiconductors or any kind of critical technologies when it comes to authoritarian countries. Because if those trading routes would be cut suddenly, then we would be in trouble.’

Ms Marin later met Prime Minister Anthony Albanese at his official Sydney residence. The pair released a joint statement saying their talks ‘underlined the need to work together in strengthening their resilience as open and democratic societies and in fostering sustainable development’.

Australia, which is the most generous donor to Ukraine’s war effort outside Nato, and Finland, a country that is soon to became a Nato member and shares a 800-mile border with Russia, demanded in the statement Moscow immediately withdraw its forces from Ukraine.