Family were struck down by crippling food poisoning after being served ‘half-cooked Christmas dinner in cockroach-infested hotel’ on £4,550 holiday from hell

A British family have told how their Christmas holiday turned into a nightmare after they were struck down with crippling food poisoning along with dozens of other guests while staying in a notorious hotel infested with cockroaches and flies.

Chris Swan, 55, his partner Francis Reid, 45 plus their two children and her three children from a previous relationship arrived at the Hotel Rio Playa Blanca in Lanzarote on 22 December for a week-long festive sunshine break.

They booked their all-inclusive holiday with TUI paying £650 per person not realising that earlier this year the travel company paid out £232,000 to 83 British tourists following an outbreak of food poisoning at the same hotel, which is also known as The Holiday Village. 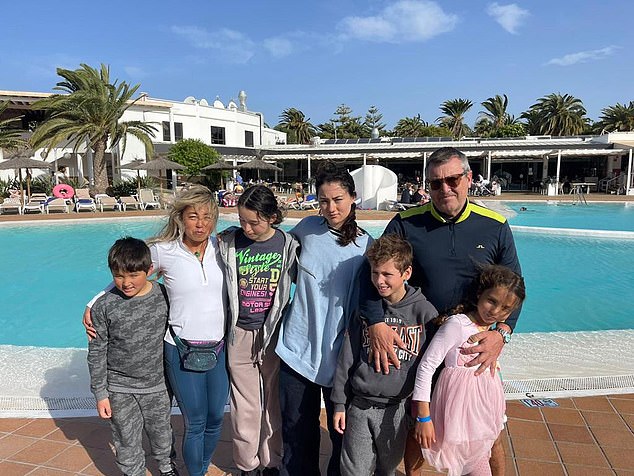 Chris Swan, 55, his partner Francis Reid, 45 plus their two children and her three children from a previous relationship (pictured) arrived at the Hotel Rio Playa Blanca in Lanzarote on 22 December 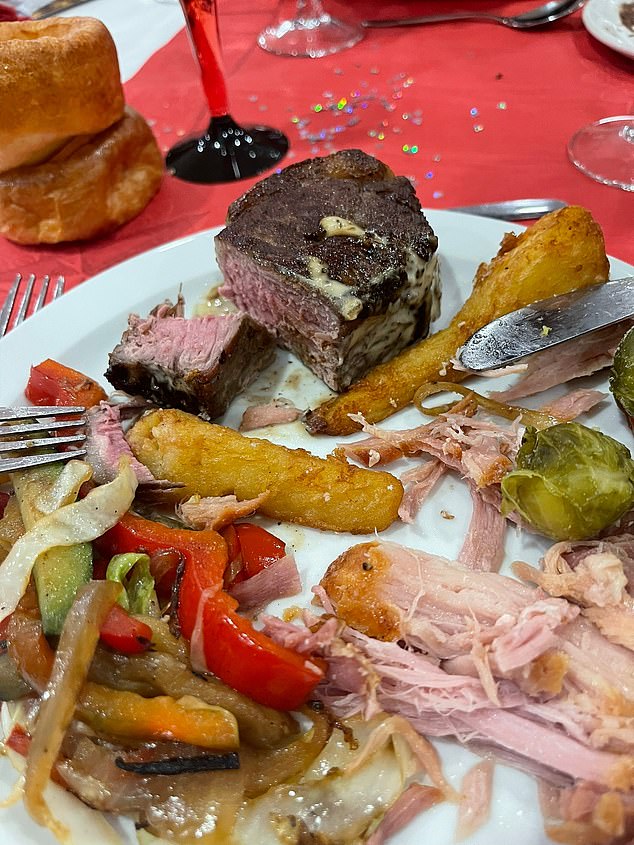 The family’s Christmas dinner included poorly cooked vegetables and a  ‘half- cooked’ beef, turkey and ham 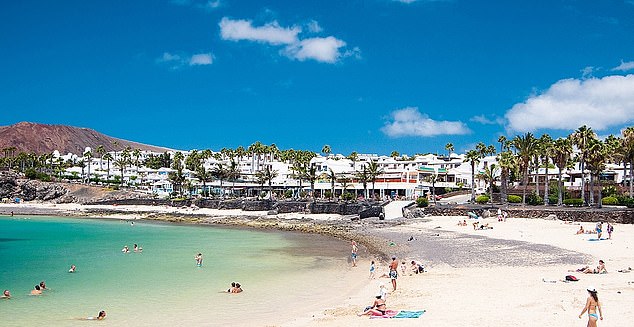 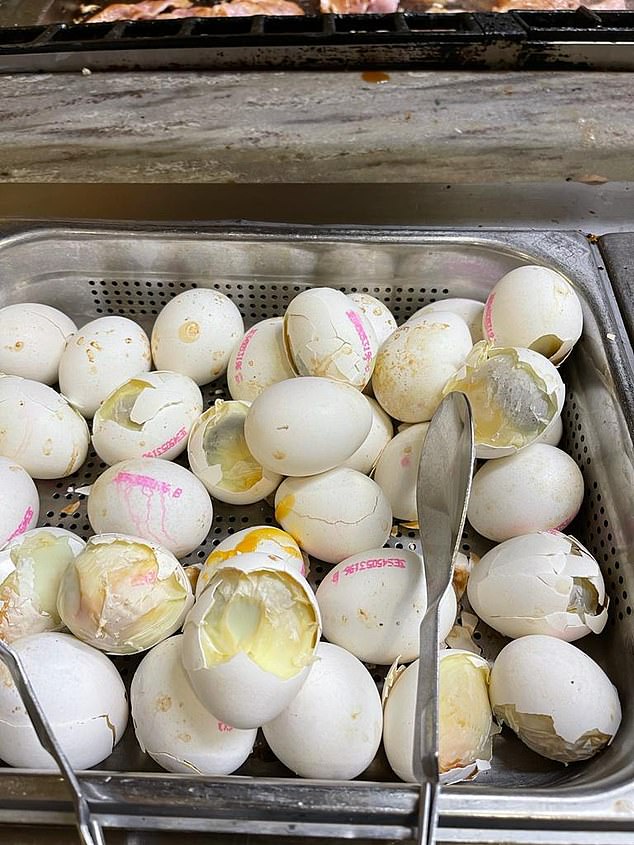 Mr Swan, a property investor, from New Forest, Hampshire, fumed: ‘The food was truly appalling, it was the worst I have ever seen and much of it was inedible.

‘If I had known that this was the same hotel as the one where British tourists received compensation for food poisoning then I promise you, I would not have booked it. The whole experience ruined our Christmas. This hotel is a public health disaster, it’s just a matter of time before somebody dies.’

He added: ‘Every other guest in the hotel got food poisoning and that was all we were talking about. This was meant to be a happy time for everybody but sadly, food poisoning dominated all the Christmas conversation.’

The family and other guests were forced to endure half cooked boiled eggs for breakfast, burnt pancakes, poorly cooked vegetables with Christmas dinner of ‘half- cooked’ beef, turkey and ham accompanied by limp vegetables proving to be an even bigger disaster.

Mr Swan revealed: ‘The meat was badly cooked, the staff had no idea of food hygiene and the whole Christmas day meal experience was terrible. It was deadly shocking and a total shambles.’

Mr Swan, his partner and their children were all left suffering from vomiting, diarrhoea, sweating and stomach cramps along with other guests.

His youngest daughter Christina, 9 suffered the worst, vomiting up to eight times per day and being prescribed medicine to deal with her symptoms. 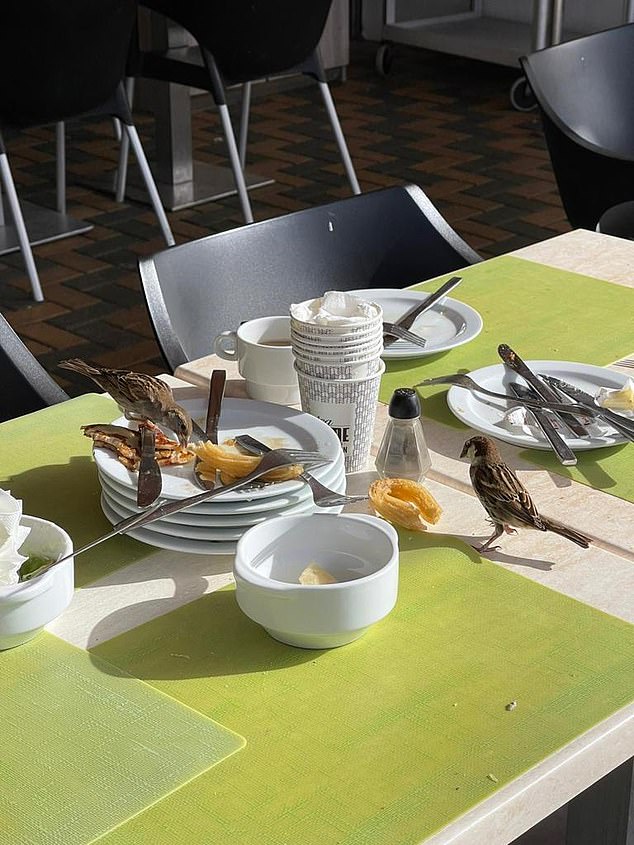 Mr Swan maintains that cockroaches, flies and birds helping themselves to food were a regular sight at the hotel 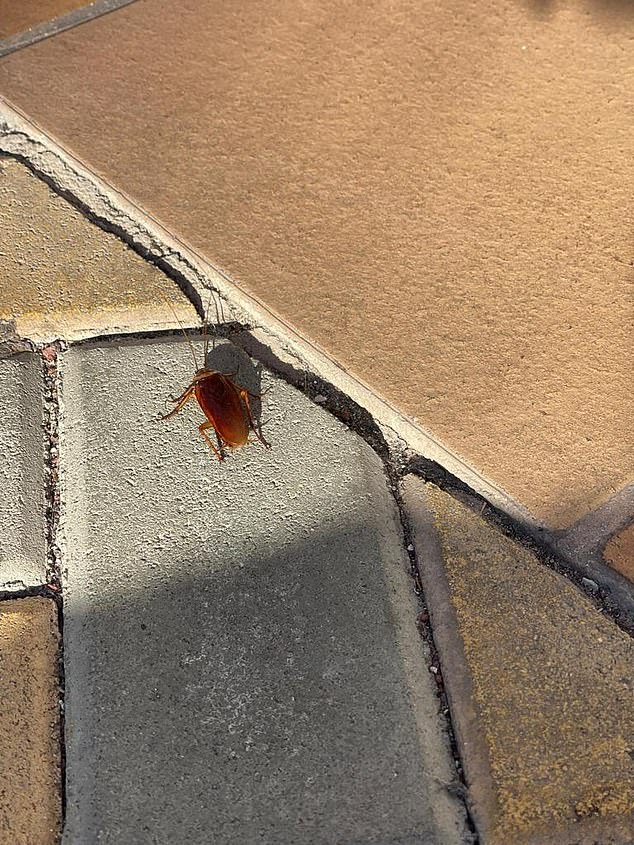 In addition to this, Mr Swan maintains that cockroaches, flies and birds helping themselves to food were a regular sight at the hotel with management showing little enthusiasm for tackling the problems.

At one stage a stale bread roll, which appeared to look like human waste, was spotted in the hotel swimming pool.

While a doctor was made available for guests, they had to pay £123 for a consultation.

Mr Swan added: ‘I spent a lot of time complaining to the hotel management, but they just couldn’t be bothered and showed very little concern for the safety of their guests. They were horrible and arrogant and had a very dismissive attitude.

‘It was disgraceful that guests had to pay to see a doctor when all their medical problems were caused by the negligence of the hotel.’

Mr Swan and his partner also emailed TUI alerting them to the food poisoning outbreak and the overall hygiene standards in the hotel.

He fumed: ‘TUI just don’t seem to care and fobbed us off with an email offering to relocate us to another hotel, but we never heard back from them. The company have shown little regard for our safety, it’s disgraceful that so many of their guests got ill and they have done nothing about it.’

Mr Swan revealed that he became so concerned about eating in the hotel that he resorted to hiring a car so that the family could visit nearby restaurants. 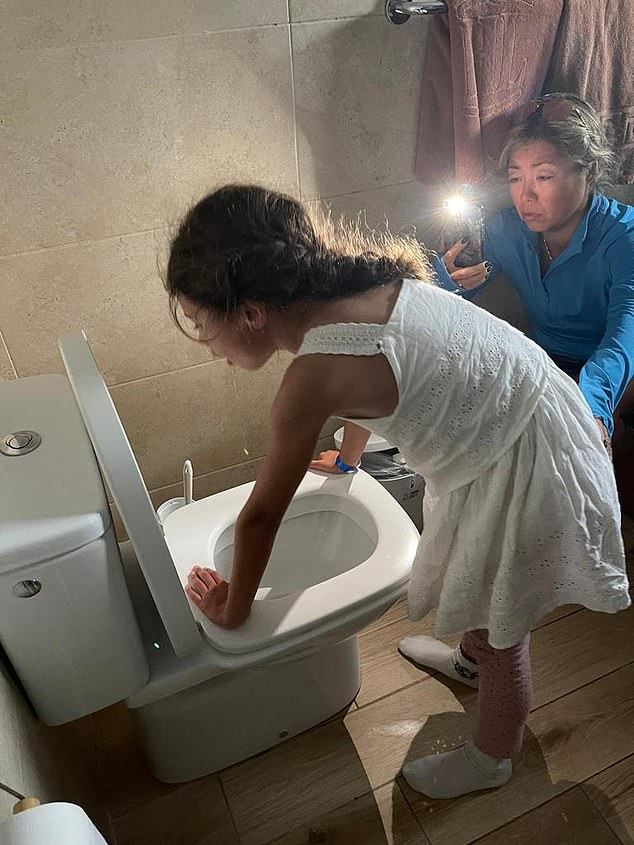 Mr Swan’s youngest daughter Christina, 9 suffered the worst, vomiting up to eight times per day and being prescribed medicine to deal with her symptoms 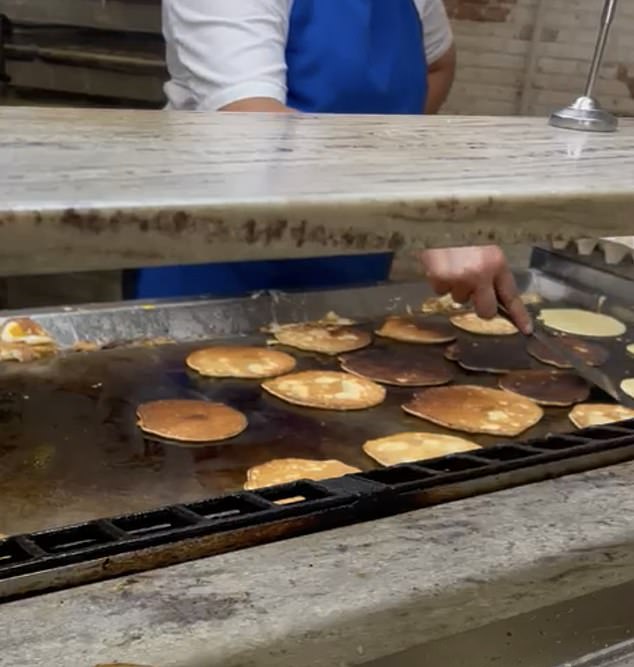 He added: ‘This was meant to be a relaxing Christmas holiday by the pool and I had no intention of going anywhere. But I ended up paying a lot of money to eat at restaurants and hiring a car which was not in the plan at all.

‘This holiday has been extremely stressful and at times my partner has been in tears because she’s been so worried about how sick the kids got. Sadly, this awful story was replicated many times over because so many people in the hotel got food poisoning.’

Mr Swan has now returned to the UK and has assembled statements from other guests with a view to launching a group action for compensation from TUI similar to the one that took place earlier this year.

On that occasion, TUI denied liability – or even that the 89 tourists had food poisoning – but agreed to settle the bulk of the claims, a judge, Master John Dagnall, was told during a hearing in May.

All the cases were filed at the High Court in 2021 and 83 of them with were settled with six more serious ones still outstanding.

Guests complained of poor hygiene standards at the hotel, with animals and insects reportedly spotted roaming in eating areas, undercooked food, ‘maggots in milk’ and ‘faecal incidents’ in the resort pool.

The Rio Playa Blanca hotel boasts on its website about having ‘charming bungalows, gardens with tropical palm trees and four-star services designed for families, couples and groups of friends who want to enjoy a relaxing and authentic ambiance and plans for all tastes.’ 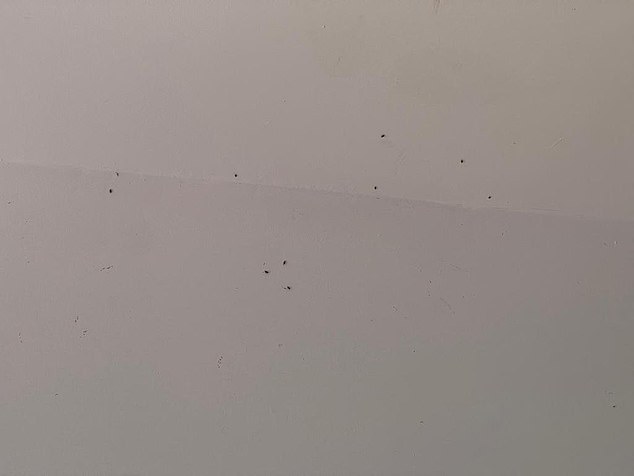 According to Mr Swan, flies were often seen around the food area within the hotel 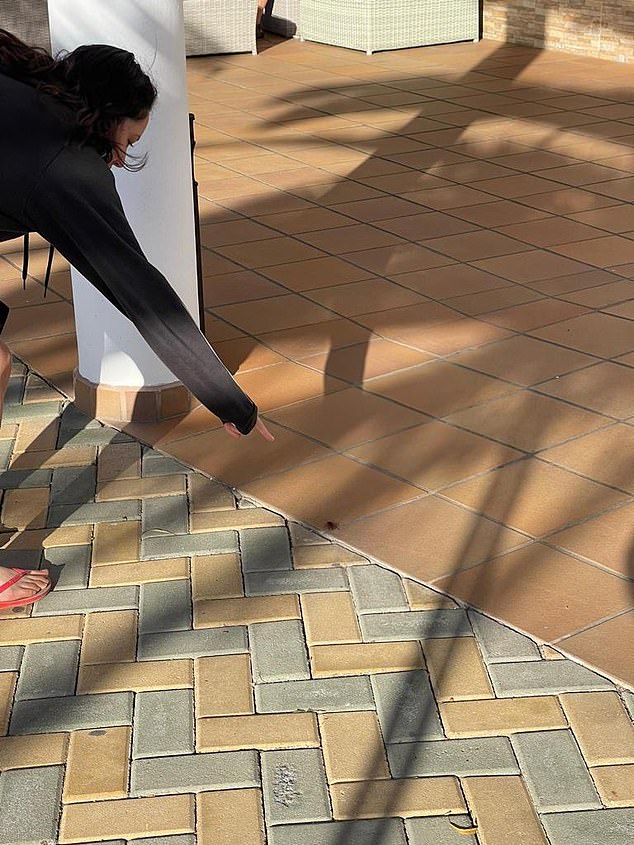 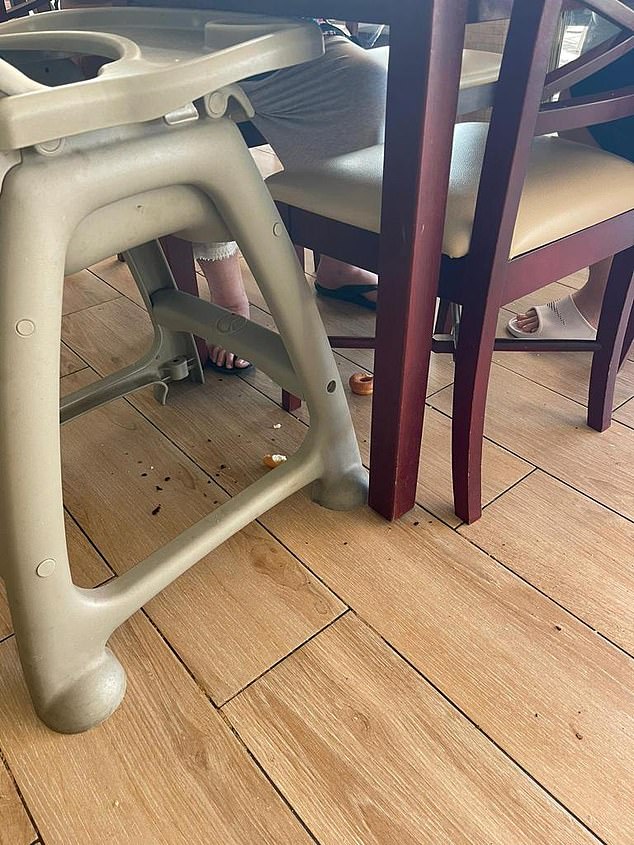 Food and stale items were reportedly left on tables and on the floor, attracting cockroaches, birds and flies

It has three swimming pools, a water park and three restaurants, which it says feature a ‘unique gastronomic offer’, including the use of the ‘most delicious local products’.

A spokesperson for TUI said: ‘We are really concerned to hear about this family’s experience, and we’d like to reassure customers that situations like this are extremely rare.

‘We are now investigating with the hotel as we have very few reports of TUI customers being ill. A full external audit has also taken place, with no major concerns raised. We have been in touch with the customers to explain how to process their complaint.’

A manager at the hotel said: ‘There has an outbreak of food poisoning but I can’t tell you why. It’s not just us but a number of hotels in this area have been affected.’