A German joke, opined Mark Twain, is no laughing matter. Nor, obviously, is the US election. The result will leave many elated, many miserable, many bewildered.

But there is one consolation for believers – whomever they wanted to win – and that is the biblical idea that God’s benevolent will is not thwarted by the behaviour of humans. In the 6th century BC the prophet Jeremiah wrote: “Who has spoken and it came to pass, unless the Lord commanded it?” The ancient wisdom book of Proverbs notes that “The king's heart is in the hand of the Lord; he directs it like a watercourse wherever he pleases”.

There are several examples where the Bible says God used unbelieving rulers, but the most notable are Nebuchadnezzar and Cyrus. 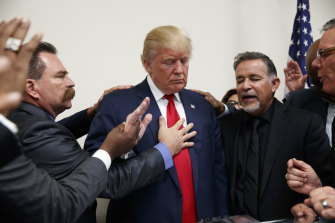 Pastors from the Las Vegas area pray with Donald Trump before his election victory in 2016.Credit:AP

Nebuchadnezzar was the king of Babylon who sacked Jerusalem in 597 BC and led the Jews into captivity. Jeremiah is explicit that Nebuchadnezzar is working God’s will, to refocus his rebellious people’s attention on him. And, in turn, God humbled the cruel potentate by sending him insane, like “a beast of the field”, until he acknowledged God’s sovereignty in a humble prayer.

But Christians who support Donald Trump prefer to see in him the example of Cyrus, who conquered Babylon in 539 BC to form one of the largest empires of the ancient world – that is, an unbeliever but God’s man for the age.

But Cyrus as a man seems far more admirable – a tolerant ruler who has been described as the father of multiculturalism because he allowed the subject peoples of his empire to keep their culture and religion. In 538 BC he let the Jews return and rebuild Jerusalem.

The biblical narrative makes the point that God works his will in every situation, however little humans may understand that. And just as the clay cannot question the potter, so humans cannot judge God (Isaiah). The long-suffering Job, the byword for the patience we are all going to need, confesses: “I know that you can do all things, and that no purpose of yours can be thwarted.”

None of this, of course, removes our own moral responsibility or need to love our neighbour and build a better society.

I cannot claim to know what God’s purpose is in this election, or in any contemporary events, and am suspicious of anyone who does, but I do have faith that whatever it is, it will not be thwarted. And God’s ultimate purpose was expressed in Jesus Christ, saving his people without compromising either his justice or his mercy.

Barney Zwartz is a Senior Fellow of the Centre for Public Christianity.