Mystery of art’s most scandalous picture revealed: Experts say they are ’99 per cent’ sure painting’s naked nether regions belong to a Parisian ballet dancer

One of the most scandalous mysteries of the art history world appears to have been solved.

The identity of the model who posed for a nude painting in 1866, Gustave Courbet’s ‘L’Origine du monde’ (The Origin of the world), has mystified experts for around 150 years.

Yet, many now claim they are ’99 percent sure’ the painting’s notorious naked nether regions belong to the Parisian ballet dancer Constance Queniaux. 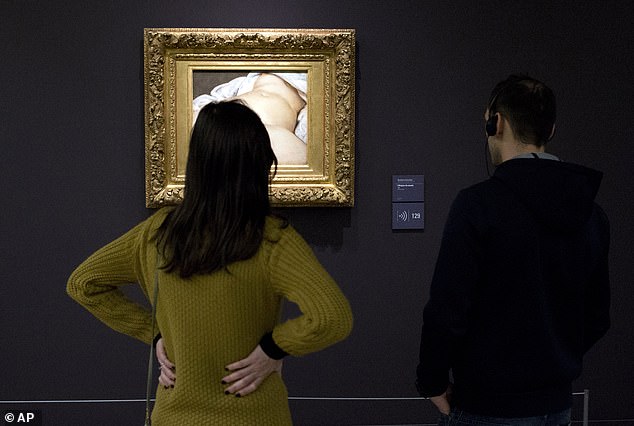 L’Origine du monde (The Origin of the World) by French artist Gustave Courbet. Painted in 1866 with oil on canvas, the close-up framing purposefully emphasises the eroticism of the work

Even in today’s climate, the canvas retains its power to shock; profiles featuring it were censored by Facebook as late as 2011.

For decades art historians have been convinced that the naked torso and genitalia depicted by Courbet belonged to his lover, the Irish model Joanna Hiffernan.

In a typically Parisian love triangle, Hiffernan was also romantically linked with his friend and fellow artist James Whistler. 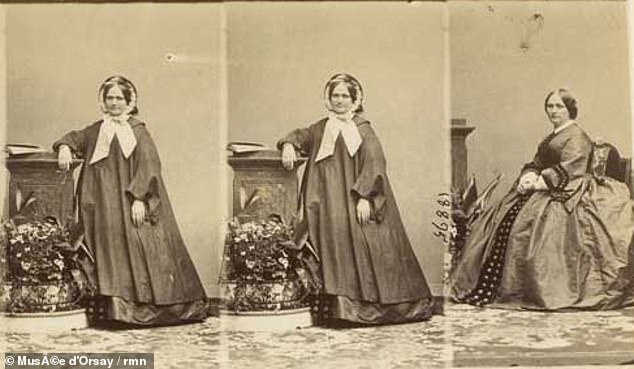 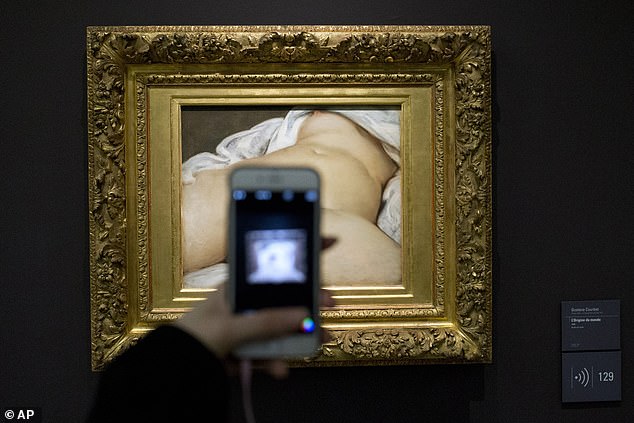 The picture is housed at the Musée d’Orsay in Paris, where it is purported to be the second most popular painting after Renoir’s Bal du moulin de la Galette

But doubts persisted – mainly because the dark pubic hair in the painting did not correspond with Hiffernan’s own red curls.

Now, new documentary evidence has been unearthed in form of correspondence between the French writers Alexandre Dumas fils – son of ‘The Three Musketeers’ author – and George Sand.

Their letters point directly to Queniaux, a former dancer at the Paris Opera.

She was a mistress of the Ottoman diplomat Halil Sherif Pasha when the ‘L’Origine’ was painted in the summer of 1866.

And it was Halil who commissioned the painting from Courbet for his personal collection of erotica. 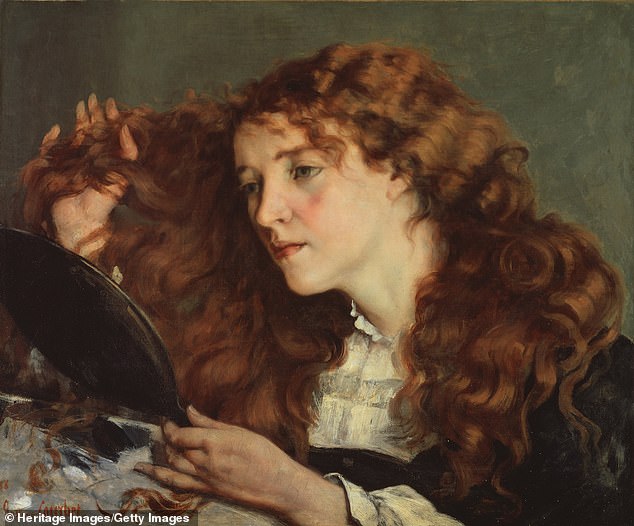 Art historians originally attributed the naked torso and genitalia in ‘L’Origine’ to Irish model Joanna Hiffernan (depicted here in Courbet’s La Belle Irlandaise), but doubts persisted due to the contrast between Hiffernan’s red and the model’s dark hair

One particular passage perplexed him: ‘One does not paint the most delicate and the most sonorous interview of Miss Queniault (sic) of the Opera.’

After consulting the handwritten original he realised there had been a mistake in its transcription. ‘Interview’ was in fact ‘interior’.

‘Usually I make discoveries after working away for ages,’ said Schopp, whose new book on the find will be published this week.

‘Here I made it straight away. It almost feels unjust,’ he joked.

The writer shared his discovery with the head of the French National Library’s prints department, Sylvie Aubenas.

‘This testimony from the time leads me to believe with 99 percent certainty that Courbet’s model was Constance Queniaux,’ she confirmed.

Queniaux was 34 at the time and, having retired from the Opera, was competing with the famous courtesan Marie-Anne Detourbay for Halil Pasha’s affections. 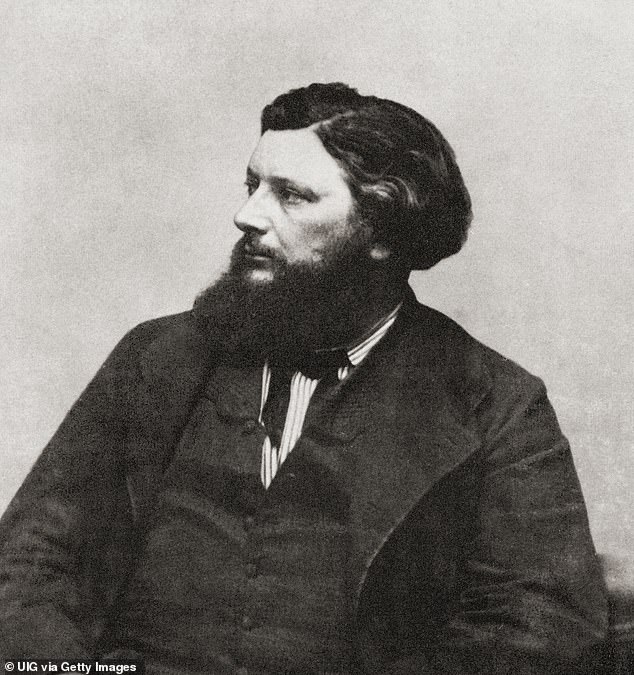 Courbet first came to prominence in the late 1840s and early 1850s with depictions of peasants’ and workers’ hardships on a grand scale traditionally used for religious imagery. His association with the Paris Commune meant he was imprisoned for six months and lived in exile in Switzerland from 1973 until his death

Detourbay, sometimes known as Jeanne de Tourbey, held a famous salon and would later become the comtesse de Loyne. She was also considered by some to be the model for ‘L’Origine du monde’.

The French National Library has several photographs of her including one by the famed photographic pioneer, Nadar.

Aubenas believes the secret of the model’s identity was known by the cognoscenti but was lost over time as Queniaux became a highly respectable lady of leisure known for her philanthropy.

According to Aubenas, a second discovery by Schopp helped to clinch the argument. When she died in 1908, Queniaux left behind a Courbet painting of camellias, at whose centre is a lusciously open red blossom. 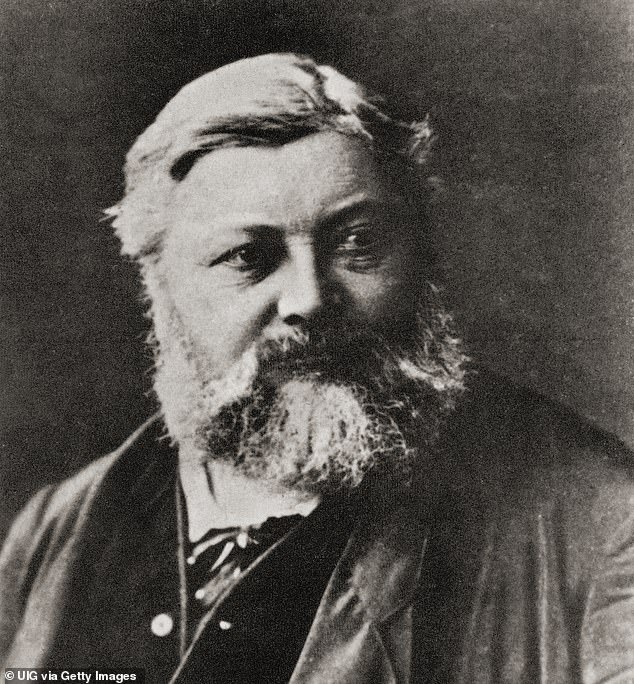 The painting’s creator, French artist Gustave Courbet (1819-1877) who was a leading figure in the Realism movement

Camellias were strongly associated with courtesans at the time thanks to Dumas’ novel ‘The Lady of the Camellias’, which was adapted into Verdi’s opera ‘La Traviata’.

Aubenas believes it may have been a gift from Halil.

‘What better tribute from the artist and his patron to Constance?’, she said.

Born in Cairo, the pasha was a renowned art collector and gambler. His Turkish-Albanian family came from what is now northern Greece.

Hilal commissioned a series of major works from Delacroix including ‘The Women of Algiers’ and Ingres’ equally iconic and extravagantly fleshly depiction of a harem, ‘The Turkish Bath’.