An economic collapse in the eurozone caused by coronavirus has ‘likely bottomed out’ as lockdowns have been eased across the continent, experts have said.

The economies of 19 countries using the euro are still declining but are doing so at a much slower rate, analytics firm IHS Markit said in a report on Thursday.

Data showed economic activity rose significantly between April, when it dropped to record lows amid lockdown, and May, when measures started to relax.

But it remains well below the level required for the economy to break even, the report said, and below the worst month of the 2009 financial crash. 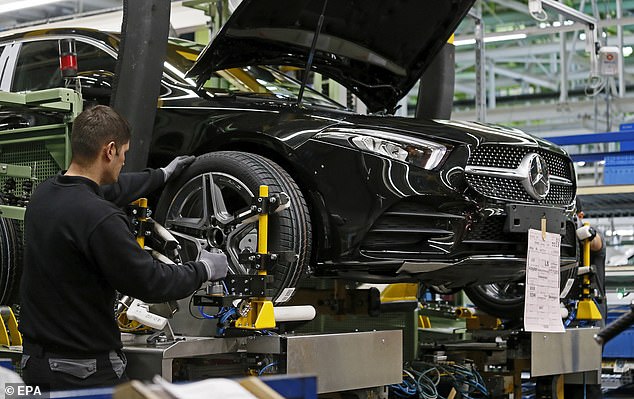 Economic activity in the 19 countries that make up the eurozone crashed to unprecedented lows in April. It has now improved, but is still well below the level required to break even (file)

Chris Williamson, Chief Business Economist at IHS Markit, said: ‘The eurozone saw a further collapse of business activity in May but the survey data at least brought reassuring signs that the downturn likely bottomed out in April.

‘Second quarter GDP is still likely to fall at an unprecedented rate, down by around 10% compared to the first quarter.’

IHS Markit uses survey data from managers at 400 companies spread across all sectors to put together what it calls a Purchasing Managers’ Index (PMI).

The PMI score compares those who say activity has increased compared to last month, versus those who saw no change or a decline.

In order for an economy to break even, the figure must be around 50. Above that, and it increases, below that and it decreases.

The PMI figure does not represent concrete economic data, but rather predicts whether an economy will expand or contract based on activity within in.

It is a widely-respected measured that is used by many banks, including the European Central Bank, to help make interest rate decisions.

Another economy-watching firm, Capital Economics, agreed that the data pointed to the eurozone’s economy having ‘probably reached the bottom in April, providing some hope that the economy is now slowly on the road to recovery’. 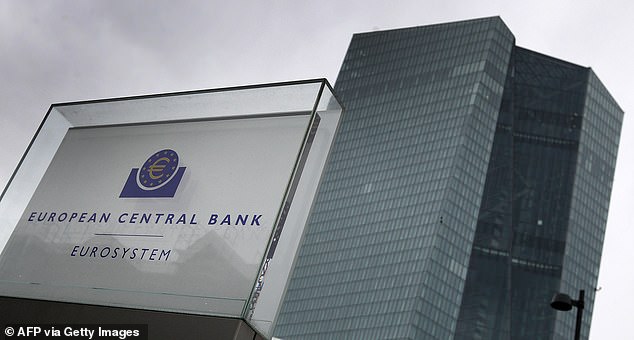 Analysts predicted a second-quarter fall in eurozone GDP of 10 per cent compared to the first quarter, and for the economy to end the year 9 per cent down (file)

It cautioned that the euro area would likely be ‘remaining very depressed even as lockdown measures are being gradually lifted’.

The PMI survey, which has business managers comparing their manufacturing and services output to the previous month, showed the coronavirus pandemic was responsible for closing non-essential businesses, disrupting supply chains and diminishing demand.

Job cutting continued at an ‘unprecedented’ rate, with only a modest slowing compared to April, as companies shed payrolls to cope with lower demand.

‘Furlough schemes were often cited as having reduced the near-term need to reduce staffing numbers, but longer-term job retention depends on the speed at which order books will refill,’ IHS Markit said.

‘Social distancing and other virus-related lockdown measures continued to hit businesses such as hotels, restaurants, travel and tourism and other consumer-facing firms especially hard, resulting in the third-steepest decline ever recorded,’ it said.

Pessimism among the surveyed managers remained high for the coming 12 months, it noted.

The so-called ‘flash’ PMI contained specific figures only from the eurozone’s two biggest national economies, Germany and France, and more general data from the rest of the eurozone.

Germany showed a milder downturn, at 34.1 points, than in France, on 32 points, ‘while the rest of the eurozone saw the steepest decline’.

Capital Economics said France’s worse showing was ‘unsurprising’ since it eased its restrictions later than Germany and more slowly.

The economic analysis unit of the Dutch bank ING said the PMI showing lingering malaise in the eurozone ‘buries any final hopes of a V-shaped recovery’ in which activity would have sharply bounced back.

‘It confirms that a quick recovery of output is not what we’re seeing,’ it said, adding that ‘the majority of businesses are still experiencing contraction or no change from a very low base’ and ‘the pace of job cuts remains the most concerning’.