Washington: President Joe Biden is reassessing the US relationship with Saudi Arabia following the decision to slash global oil production – a move that will help Russia pay for its war in Ukraine while pushing up gas prices ahead of the midterm elections.

One week after the oil cartel OPEC announced it would cut production by two million barrels a day, the Biden administration is re-evaluating the relationship amid growing pressure within its own ranks for retaliatory measures, such as curbing arm sales or stripping OPEC members of various types of legal immunity. 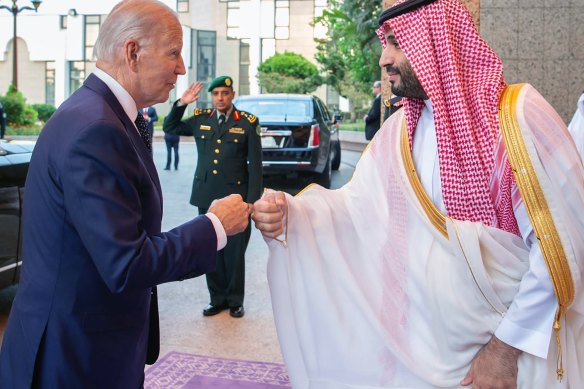 Joe Biden with Saudi Crown Prince Mohammed bin Salman in July during his visit to try to push for increased oil production.Credit:AP

The decision by the 23-member group was particularly irksome for Biden, who not only met with Saudi Crown Prince Mohammed bin Salman in July – despite vowing to make his kingdom a “pariah” over the assassination of journalist Jamal Khashoggi – but also shared an infamous fist-bump with the controversial leader.

“The President believes that it’s time to take another look at this relationship and make sure that it’s serving our national security interests,” White House spokesman John Kirby told reporters on Tuesday (US time).

“It was a short-sighted decision that benefited Russia at a time when nobody in any capacity should be trying to benefit Vladimir Putin. We also believe it’s going to have an impact predominantly on lower and middle income countries, quite frankly… and yes, it was an OPEC-plus decision but clearly Saudi Arabia is the leader of that cartel.”

The rethink comes as Biden faces heightened calls from Congress to take a tougher stance against the Saudis. The latest came from Democratic Senator Bob Menendez, the Chair Senate Foreign Relations Committee, who declared that “enough is enough”.

“The United States must immediately freeze all aspects of our cooperation with Saudi Arabia, including any arms sales and security cooperation beyond what is absolutely necessary to defend US personnel and interests,” he said in a statement.

“There simply is no room to play both sides of this conflict – either you support the rest of the free world in trying to stop a war criminal from violently wiping an entire country off the map, or you support him. The Kingdom of Saudi Arabia chose the latter in a terrible decision driven by economic self-interest.”

Kirby said the President was well aware of the anger “from both sides of the aisle” and was willing to discuss retaliatory measures with members of Congress. However, he added that those talks had not yet taken place, so it was too early to say “what a re-evaluation could look like or what other decisions might come up”.

OPEC’s decision to cut oil production comes at a particularly volatile time, with energy prices already soaring around the world, including the US where the current average is now at $US3.92 a gallon.

The issue has presented the Democrats with yet another cost-of-living headache ahead of the US midterms elections on November 8, where control of Congress hangs in the balance.

It also comes as Vladimir Putin continues to escalate his aggression towards Ukraine, threatening to use nuclear weapons to defend what he views as Russian territory.

Biden unexpectedly addressed Putin’s nuclear brinkmanship during a fundraiser last week at the New York home of James Murdoch, the son of media mogul Rupert Murdoch. In comments that alarmed many, the President warned that Putin was “not joking” and that “we have not faced the prospect of Armageddon since Kennedy and the Cuban missile crisis” – a reference to the standoff with the Soviet Union in 1962. 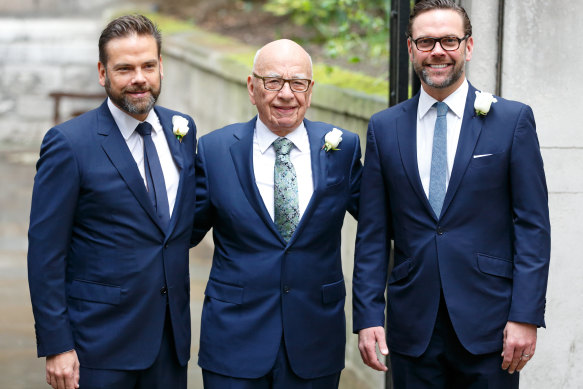 Rupert Murdoch, flanked by his two sons, Lachlan, left and James, in 2005.Credit:Getty

The White House later clarified that Biden’s remarks were not based on any shift in US intelligence.

Asked today how the administration would know if Russia did indeed plan to use nuclear weapons, Kirby said it was not the first time they had seen such “sabre-rattling” from Putin, and that “obviously we take these threats seriously”.

However, he added: “We’ve seen no indication, nothing that tells us Mr Putin has made a decision to use nuclear weapons or weapons of mass destruction at all.”

“But we know that he knows his military is under increasing pressure inside Ukraine, so all of that, we believe, makes it imperative that we continue to monitor those capabilities as best we can.”