How can we encourage the unvaccinated when neither the carrot nor the stick works?

Getting back to school or work depends upon offering hope and reassurance, neither of which has been in plentiful supply. 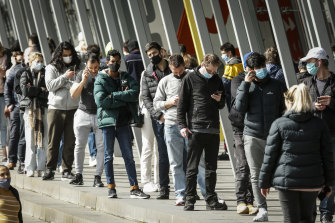 Maybe we can try some friendly interstate rivalry, state against state, mate against mate. Victorians – get injected or NSW will get their cafes and pubs open first! Unimaginable. Queensland – COVID-19 is like cane toads, by the time you notice, it’s too late. Get the jab now.

Given we are assured the efficacy of the two vaccines is almost identical and any lasting side effects from either are vanishingly rare, we ought to emphasise that the walk, drive or bicycle ride to the doctor to get vaccinated carries greater risks than the injection itself.

Australians noticed the example set by the Prime Minister. He grabbed one of the first rare Pfizer shots, despite not being in the highest priority category, thus unwittingly playing a part in establishing a completely unhelpful vaccine hierarchy.

Pfizer snobbery began right there. The public are not stupid and will judge their leaders by what they do, not what they say. Being told to get AZ from someone who opted for Pfizer is unhelpful. 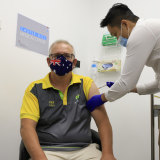 Prime Minister Scott Morrison gets his Pfizer jab in February.Credit:Getty

We must dispel the widely held belief that there is a “preferred” vaccine and a “second-best” vaccine. If the government can import Sinovac from China, as a sacrificial offering, then AZ might be in demand as the least-worse option – just joking.

The inexplicably delayed but now growing pharmacy rollout will help as pharmacists are the most trusted and available source of community health advice.

As it stands, we are at risk of developing a COVID caste system. At the apex are The Pfizers, then the AZers, and the un-vaxxed are untouchables. Soon they will not be welcome in many workplaces, hospitals, cinemas, cafes, restaurants, airlines or in polite society. They stay in their cave.

We wear seatbelts, and bike helmets, drink fluoridated water and eat bread and cakes full of additives and preservatives. Contrived appeals to “bodily purity” smack of inconsistency and stem from the narcissism of self-taught virologists who think that overnight they know more about vaccines than a Nobel Prize winner.

The gold standard for saying absurd things and changing the message as often as most of us change shirts has to be the NSW Premier, Gladys Berejiklian. Her constant shifts and almost daily side steps on lockdown eroded her authority, but despite that Sydneysiders are leading the vaccination race. 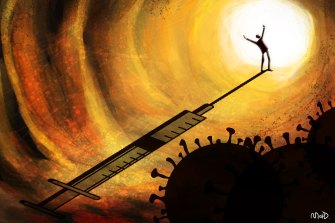 We must dispel the widely held belief that there is a “preferred” vaccine and a “second-best” vaccine.Credit:Illustration: Matt Davidson

She has been proven wrong again and again, but never acknowledges it. For all of last year’s failings in Victoria, and there were plenty, at least they admitted the mistakes and made people accountable.

Each press conference, she looks as if she has been compelled to step to the microphone and is only reluctantly telling the public why their lives are upended. She prematurely walks away from an increasingly irritated press pack, but not before persisting with more NSW exceptionalism. “We have the best this, the best that, world-leading blah blah…” What nonsense.

The simple truth is that tracing collapses as case numbers soar, as they did in Melbourne the year before. As the PM quite rightly said we have to adapt, lockdowns cannot continue indefinitely, there must be hope, and we need a plan on how to live with the virus rather than just hope it can be completely suppressed. Now he has to deliver.

Dan Andrews lost his cool last week, swore and turned an unattractive shade of pink in frustration as the new case numbers doubled. Messaging in any emergency is as much about how things are said as the actual words spoken.

He needs to park his personal emotions and regain the composure that was his earlier hallmark. The public ought to focus on what he is saying rather than how it is said.

Jacinta Ardern, facing an exponentially growing Delta outbreak across the ditch, is a total contrast. She did not boast about NZ staying COVID free for months or claim therefore that Kiwis must be special creatures. She maintains an empathetic delivery, shows concern and calm guidance. But as the numbers there suggest a much worse outbreak than first suspected, her reserves may soon be tested.

Qantas has stepped up where the Commonwealth health bureaucrats failed and showed us how to make an emotionally engaging ad that doesn’t preach or lecture.

They have also shown how to offer incentives – a competition offering frequent flyer points and prizes for double-vaccinated travellers.

Other employers will similarly take the health and safety route, concerned for their staff and their legal obligation to provide a safe workplace. It also makes good business sense as customers vote with their feet and choose businesses that offer a fully vaccinated environment.

Like the heart health tick, “COVID-free” labelling is coming to your shopping centre soon.

Jon Faine is a regular columnist.