The non-binary drag queen who had been working in a nuclear waste job in President Biden’s Department of Energy has been charged with felony theft after they allegedly stole a bag from the baggage claim at Minneapolis-St. Paul International Airport.

Sam Brinton, whose full title was as the DOE’s deputy assistant secretary for spent fuel and waste disposition, is accused taking the bag in September.

Brinton made headlines earlier this year after proudly announcing on LinkedIn that they had become Deputy Assistant Secretary of Spent Fuel and Waste Disposition in the Department of Energy. 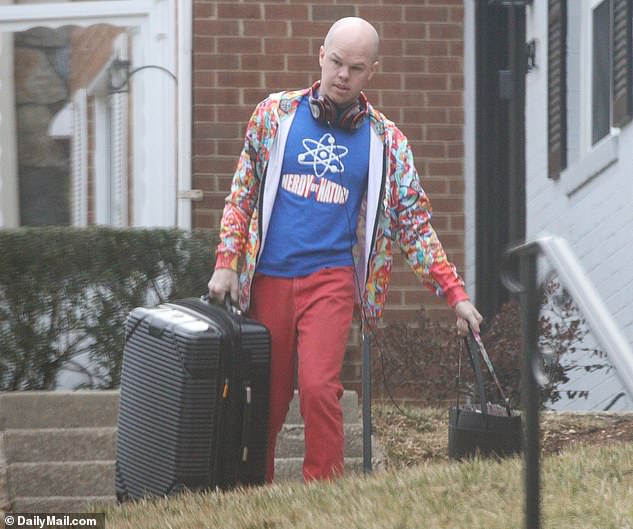 The non-binary drag queen who had been working in a nuclear waste job in President Biden’s Department of Energy has been charged with felony theft after they allegedly stole a bag from the baggage claim at Minneapolis-St. Paul International Airport. They are pictured in February 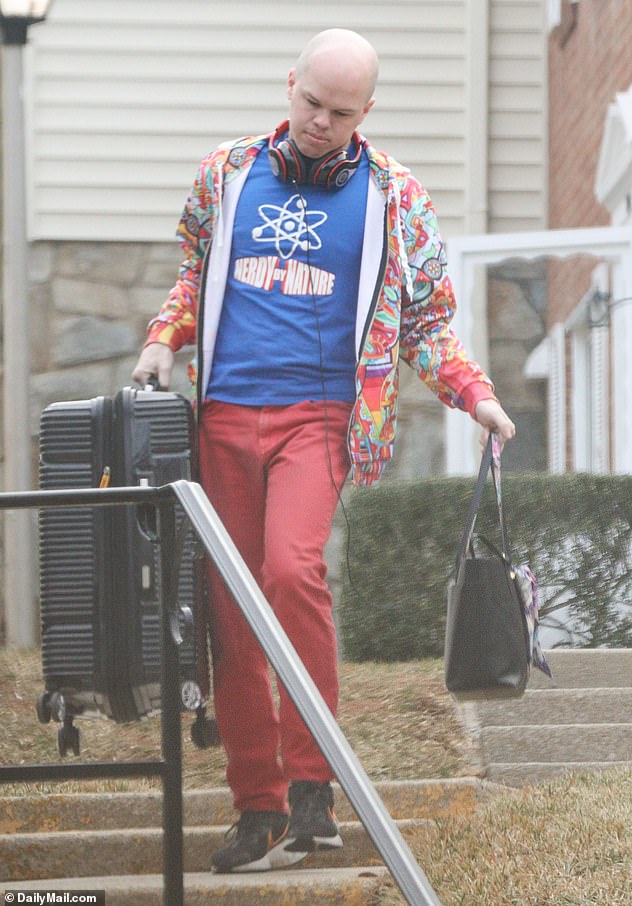 Nuclear engineer Sam Brinton was seen heading to the airport with a suitcase earlier in the year. On the trip he allegedly took another woman’s case, they did not have any bags with them 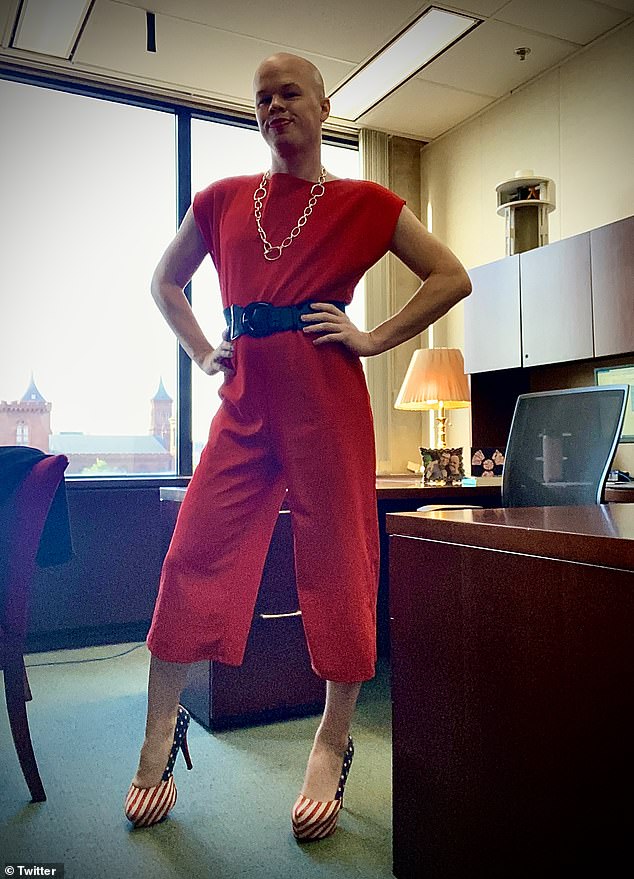 Brinton was caught on surveillance cameras at Minneapolis-St. Paul airport taking a blue bag off the baggage claim after flying in from Washington

The 34-year-old scientist, who was the first non-binary person to accept a position in federal government leadership has not been at work for at least a month with Kim Petry, the acting deputy assistant secretary for spent fuel, standing in.

Petry told coworkers she had been asked to stay on as head of the spent fuel office ‘for the foreseeable future’ by Kathryn Huff, assistant secretary for nuclear energy.

‘I should have another update for all of you in a month or so,’ Petry wrote in the email as seen by Exchange Monitor. It will no doubt depends what occurs at Brinton’s next court hearing on December 19.

In complaint from October 27, it is alleged Brinton was seen caught on airport surveillance cameras removing ‘a navy blue hard-sided roller bag’ from a baggage claim carousel.

On the same day, the bag was reported missing by a woman earlier in the day.

After reviewing several surveillance videos she identified the bag as hers adding that the total value of items in the allegedly stolen bag was roughly $2,325.

Video that has not been released to the public sees Brinton ‘removing the blue bag’s tag and putting the bag tag in the handbag they were carrying,’ and ‘leaving the area at a quick pace,’ the complaint details.

Brinton was in the airport having arrived on a fight from Washington D.C. where they live, but had not checked a bag for their journey.

Law enforcement quickly tracked them down with Brinton initially denying taking anything.

‘If I had taken the wrong bag, I am happy to return it, but I don’t have clothes for another individual,’ Brinton told police, according to the complaint. ‘That was my clothes when I opened the bag.’

But then they suddenly had a change of heart and called the airport police to come clear noting that they had not been ‘completely honest’ and ‘admitted to taking the blue bag.’

Brinton revised their statement excusing the behavior as a result of being ‘tired and taking the suitcase thinking it was theirs.’

It was only after opening the bag Brinton claims they realized it wasn’t theirs adding that they were ‘nervous people would think they stole the bag and did not know what to do.’

They then went on to claim that the clothes contained in the suitcase had been placed in a drawer at the InterContinental St. Paul Riverfront hotel, where they were staying.

No clothes were ever found at the hotel and at the time of the complaint’s filing in October, Brinton had not returned the bag. 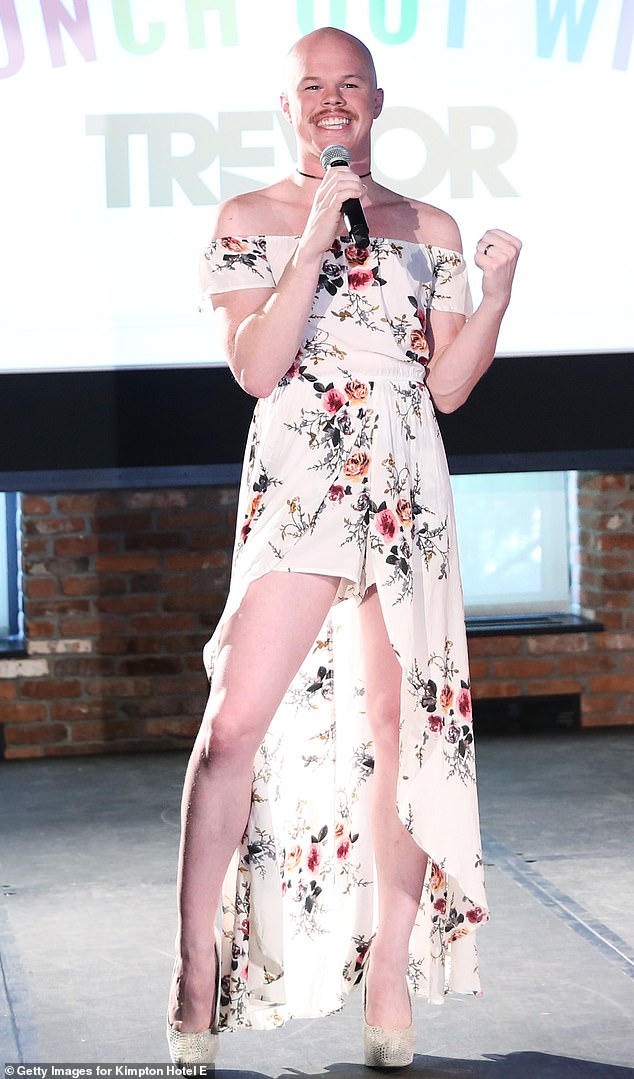 Brinton, who has a Master’s degree from Massachusetts Institute of Technology (MIT) writes in their LinkedIn bio that they are working towards ‘Solving the World’s #NuclearWaste Challenges and Protecting LGBTQ Youth from #ConversionTherapy.’

Brinton, an MIT graduate who specializes in nuclear power and energy, is also an LGBTQ activist who has been open about their advocacy work and unconventional sexual proclivities such as animal role play on social media.

They are also known to perform as ‘Sister Ray Dee O’Active’ while participating in a group called the Order of Perpetual Indulgence – a non-profit group of drag queens who dress up as nuns to raise awareness of sexual intolerance and transphobia.

Brinton has held various roles in the energy field prior to their latest position, and also served as a nuclear waste adviser in the Trump administration.

Brinton’s past is a colorful one. Born in the 1987, their parents Peggy Jo and Stephen Brinton are Southern Baptists who belong now to the First Baptist Church of Perry, Iowa. The couple have three children – Sam, Rachel and Daniel. 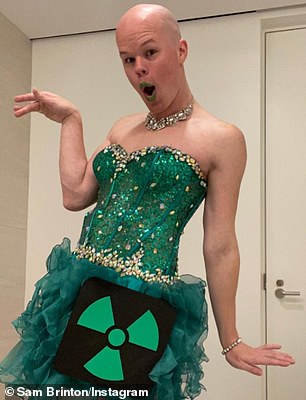 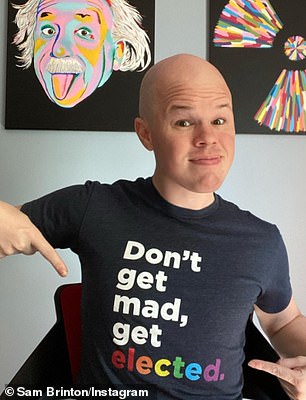 In addition to being a science nerd, Brinton is also an avid LGBTQ activist and goes by Sister Ray Dee O’Active – a member of the Order of Perpetual Indulgence – a non-profit group of drag queens who dress up as nuns to raise awareness of sexual intolerance and transphobia 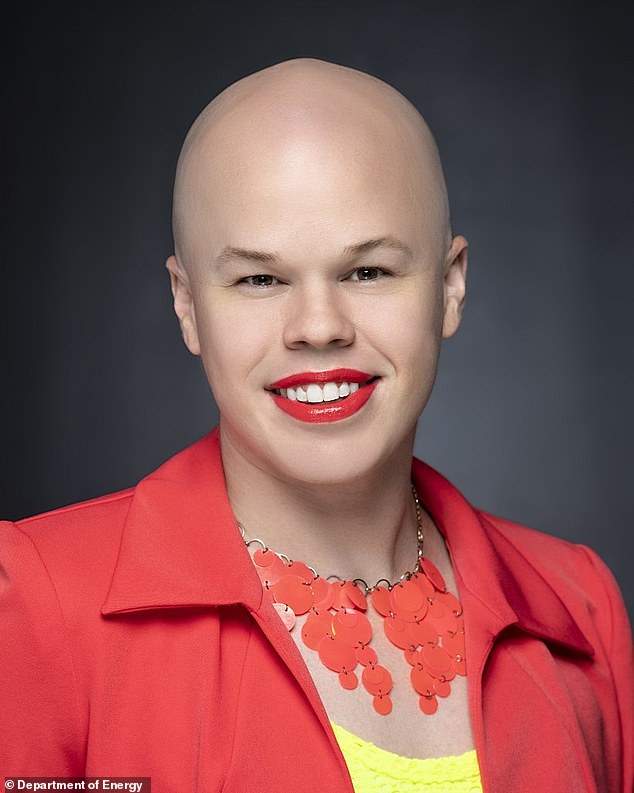 f found guilty of felony theft they could now face five years in jail, a $10,000 fine, or both

Non-binary Brinton, who goes by they/them pronouns, previously revealed their troubled relationship with their parents, both 57 – describing how they were forced to take part in conversion therapy as a teen.

Brinton also recounted how they were told to leave the family home in Perry, Iowa, after coming out to their parents as bisexual for a second time while at college – forcing them to move in with an uncle in New York.

Brinton, who is the first gender-fluid person to serve in the deputy assistant secretary role, grew up in Sanford, Florida and Perry, Iowa.

In a 2018 op-ed, Brinton told how they first came out as a middle school student and then was forced to spend two years having conversion therapy – a discredited form of counseling that aims to convert gay people to straight. He described it as ‘torture.’ 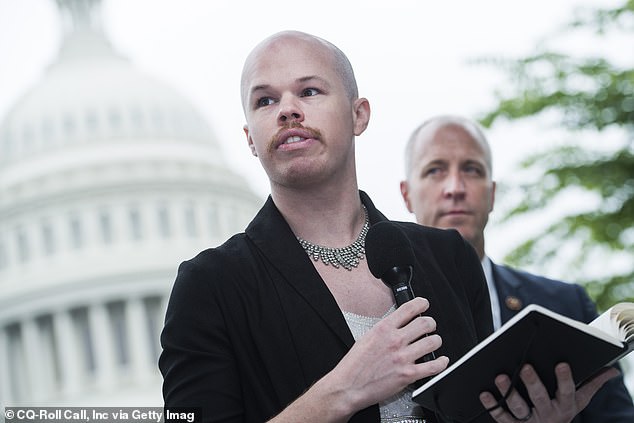 As a result, they went on to keep their sexuality hidden through homeschooling and then again while attending Perry High School after the family moved to Iowa in 2002.

Brinton’s  parents still work at the First Baptist Church in Perry – a small city of just over 8,000 people 30 miles northwest of Des Moines – and continue to live in the modest $166,000 four-bedroom home where Brinton was raised.

There, the stiletto-loving 34-year-old lived a radically different existence from their high-powered lifestyle in Washington, D.C. today. 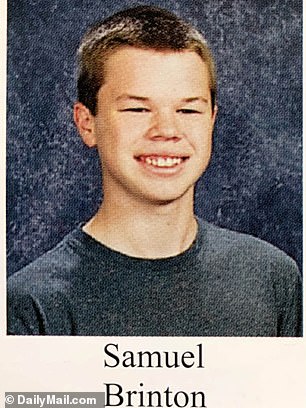 A yearbook photo of Brinton at Perry High School in Iowa

Brinton also spent four years on the school wrestling team and was a cross country runner, as well as an enthusiastic member of the school choir.

They also appeared in several school plays – including The Stuck Pot, which tells the story of how a group of schoolboys established a consolation prize for the boy ‘stuck with an awful lemon’ for a date at the school prom.

Brinton also appeared in a high school production of Grease and in Quiet Summer – a comedy play about a man who decides to spend his summer trying to become president of the local country club.

They took part in multiple academic decathlons, was a member of the public speaking team and joined the Iowa All-State chorus in their final two years at school.

They also proved popular – photos show Brinton with friends at their school prom in 2006 and taking part in a quiz in a team named Sam’s Super Sweets. 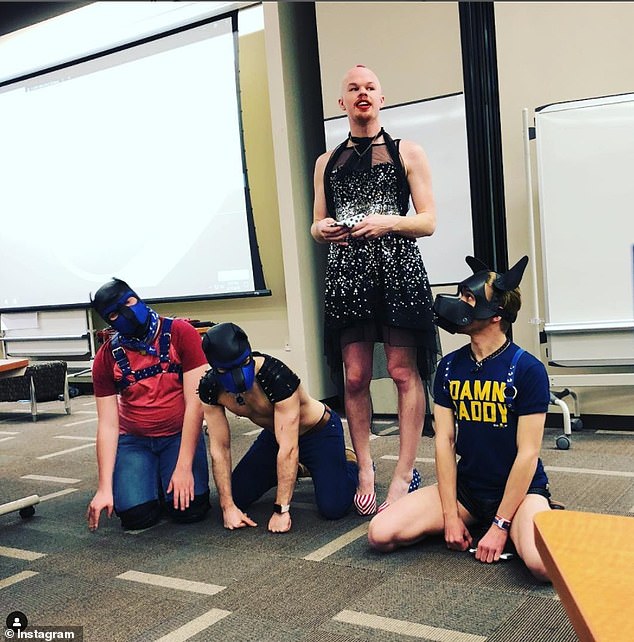 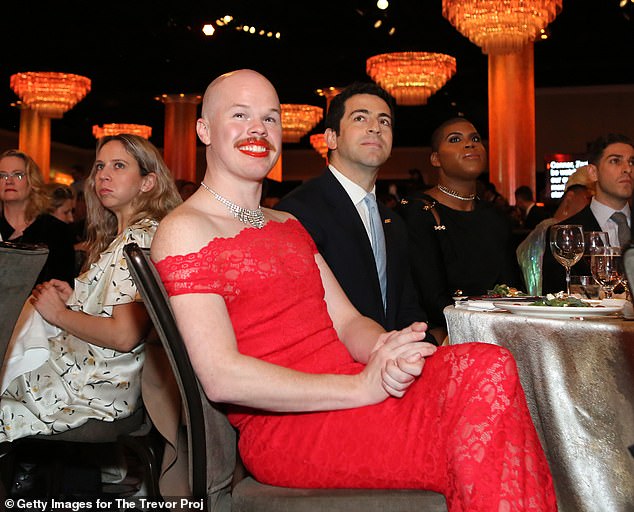 In a moving 2018 op-ed in the New York Times, Brinton described how they were put through ‘torture’ during conversion therapy, writing: ‘My parents were Southern Baptist missionaries who believed that the dangerous and discredited practice of conversion therapy could ‘cure’ my sexuality’

But according to Brinton, the conversion therapy they endured as a middle schooler left scars and it wasn’t until college – Kansas State in Manhattan, Kansas – that they felt able to come out for the second and final time.

In a moving 2018 op-ed in the New York Times, Brinton described how they were put through ‘torture’ during conversion therapy, writing: ‘My parents were Southern Baptist missionaries who believed that the dangerous and discredited practice of conversion therapy could ‘cure’ my sexuality.

‘For over two years, I sat on a couch and endured emotionally painful sessions with a counselor. I was told that my faith community rejected my sexuality; that I was the abomination we had heard about in Sunday school; that I was the only gay person in the world; that it was inevitable I would get H.I.V. and AIDS.’ 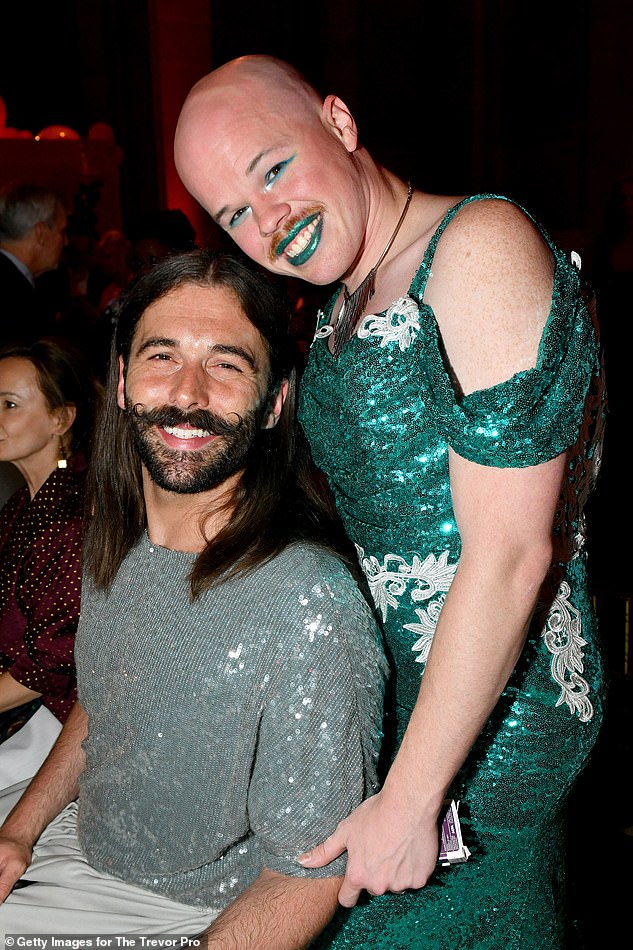