Novak Djokovic met a Serbian government minister and attended a children’s tennis event without a mask the day after he is said to have tested positive for COVID-19.

Court documents revealed on Saturday that the World No. 1, who remains in detention in Melbourne, claims to have learnt of his infection on December 16.

Tennis Australia had informed players seeking a vaccine exemption to apply by December 10. It is not clear if Djokovic had made any application for an exemption before that date.

But on December 30, his exemption to play in the Australian Open was approved by Tennis Australia and the Victorian government. Djokovic received an exemption certificate from the chief medical officer of Tennis Australia based on his prior infection. That exemption noted that he had tested positive for COVID on December 16 but had not had a fever or other symptoms in the preceding 72 hours.

However, on January 6, when he landed in Melbourne, the federal government assessed that a prior infection in the past six months was not sufficient grounds to enter the country as an unvaccinated person.

On December 14, Djokovic had attended a basketball match between Red Star Belgrade and Barcelona. He posed for photos with Barcelona player Nigel Hayes-Davis, who the basketball club announced was infected the next day, December 15. Captain Pierre Oriola and player Kyle Kuric tested positive later that month. 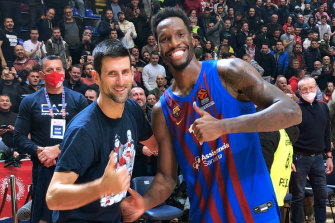 On the day Djokovic claims to have learnt of his positive PCR test result, December 16, he was reported in local media to have attended a Serbian Postal Service event to commemorate a new postage stamp created in his honour.

It’s unclear if he attended the postal service function before or after he learnt of his positive result. European and Serbian media published reports on the event about 5pm local time. 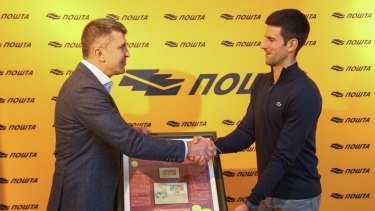 Djokovic attends a ceremony to honour him with his own postage stamp on December 16.Credit:Twitter

Also on December 16, English cricketer Kevin Pietersen posted on Instagram a photo of himself with Djokovic in Belgrade.

On December 17, the day after his positive result, the Tennis Federation of Serbia said he attended an event to award top junior players. Pictures show Djokovic without a mask with the children. 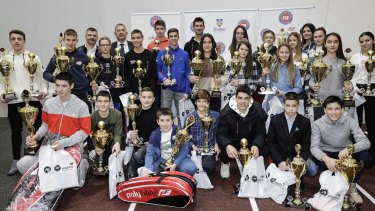 Djokovic at the December 17 awards ceremony.Credit:Tennis Federation of Serbia

On the same day, he met with a Serbian minister to mark the purchase of new scanning equipment to speed up the diagnosis of COVID-19 patients at Dragisa Misovic Clinical Hospital. In a Serbian government media release, Djokovic was quoted as saying the community needed to work together to support the health workers treating COVID-19 patients.

“The health care system is under a constant pressure, and I hope that this scanner of the latest generation will succeed in easing some circumstances and enabling a larger number of people to get the best diagnostics in a short time,” he said in a statement. 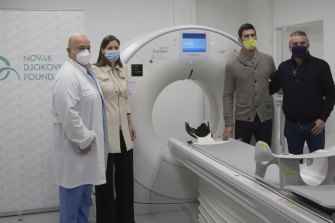 Djokovic with staff at the ribbon-cutting event.Credit:Novak Djokovic Foundation

Djokovic will attempt to overturn his visa cancellation in a Federal Court hearing on Monday. In documents filed on Saturday, his lawyers claim he received correspondence from the Department of Home Affairs on January 1 stating Djokovic’s Australia Travel Declaration had been assessed and his responses “indicated that he met the requirements for a quarantine-free arrival into Australia where permitted by the jurisdiction of [his] arrival”.

The letter Djokovic’s lawyers claim allowed him to travel to Australia without quarantining did not guarantee his entry into Australia, this masthead has learnt.

Djokovic filled out an Australia Travel Declaration using an app and declared he was exempt from needing to be vaccinated because he was infected within the past six months. The app provides a prospective traveller with a preliminary indication of their eligibility to enter Australia.

However, the result is based on the declarations of the applicant and does not provide final approval for a person to enter.

The first thorough test of a person’s evidence to prove their vaccination exemption occurs when they arrive in the country and their paperwork is scrutinised by border officials, a source familiar with the process said.

Federal Health Minister Greg Hunt declined to answer specific questions about the federal government’s assessment of Djokovic’s exemption application on Sunday morning. “As this is now a matter before the courts I’ll respectfully leave any commentary until it is heard by the courts,” he said.

Mr Hunt confirmed the second Australian Open player who entered the country using the same exemption, Renata Voráčová, had voluntarily left the country after her visa was cancelled.

On the third day of daily protests against Djokovic’s detention led by Djokovic’s family in Belgrade overnight, his father Srdjan again gave political speeches, as well as false claims about Serbian history, and took aim at Australian authorities. 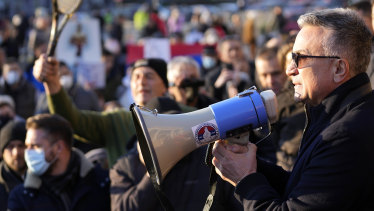 Srdjan Djokovic speaks during the protest.Credit:AP

“This has nothing to do with sport, this is a political decision. We are not angry with the Australian people, but their politicians. They let him come in and win the 10th grand slam, but this is no longer the Open, it is closed. Unfortunately for them, this has nothing to do with tennis anymore, without Novak that’s just not it and they know it,” Srdjan Djokovic said.

British broadcaster and former leader of the anti-immigration UK Independence Party Nigel Farage said on Saturday he was speaking to the Djokovic family. “He was … arrested, his phone and wallet taken,” Farage wrote on Twitter.

“If they can do this to the world’s No 1 tennis player, just think what they could do to you.”