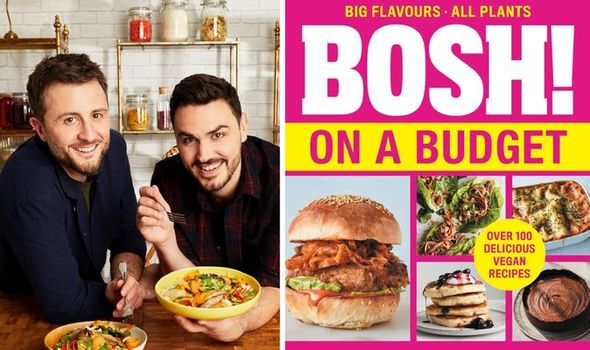 The chefs’ latest venture is a new cookbook, BOSH! On A Budget, which was released in December last year. Of the 80 delicious, money-saving, plant-based recipes in the book, Express.co.uk have chosen our three favourites to share with readers here.

“We’ve put this in the brunch chapter, as it’s a great start to the day, but Shakshuka makes a wonderful meal at any time. Served with toasted pitta for dunking, this silky red pepper stew feels really warming and generous. We’re chuffed with these vegan eggs, they look awesome and the flavour is fantastic. Super fun and perfect for Instagram.”

One and a half tbsp tomato puree 1 tsp sugar

For the egg yolks

Half a yellow pepper

For the egg whites

Light your largest gas ring or preheat your grill to high. Put the red and yellow peppers directly on the flame or under the grill for 10 to 15 minutes, turning them every five minutes, until blackened.

Set aside in a bowl to cool and steam with a plate over the top. Place the frying pan over a medium heat and pour in the olive oil.

Peel and finely chop the onion and add it to the pan. Halve the chilli, dice one half and finely slice the other. Peel and grate the garlic cloves.

Add the diced chilli and garlic to the pan and stir, cooking for five minutes. Finely chop the coriander stems and add them to the pan, reserving the leaves.

Add the oregano and the spices. Stir and cook for another five minutes. Add the tomato puree and sugar and stir until the mixture is getting darker and sticky.

Add the vinegar to the pan and let it bubble away and evaporate. Add the tinned tomatoes, bay leaves and cinnamon and a good splash of water and leave to simmer for eight to 10 minutes, until thickened and combined.

Lower the heat and keep warm until needed. Rub the burned skin from the cooled peppers with your fingers.

Seed and roughly chop the peppers. Add the red pepper to the shakshuka. Put the yellow pepper in the blender.

Add the plant-based mayo and tahini to the blender with the yellow pepper. Squeeze in the juice of the lemon and season with salt. Blend to a paste

Put the yoghurt in a bowl. Squeeze in the juice of the lemon and season with salt. Mix to combine.

Remove the bay and cinnamon sticks from the pan. Taste the shakshuka and adjust the seasoning if necessary.

If it looks dry, add a splash of water and stir it in. Make sure it’s nice and warm. Press the back of a spoon into the mixture to make four wells. Spoon a tablespoon of the egg white into each well. Use a teaspoon to add a spoonful of the egg yolk into the centre of each white.

Grill or toast the pittas. Scatter the reserved coriander leaves over the shakshuka. Finely slice the spring onion and scatter it over along with the sliced red chilli. Serve the pittas alongside for dipping.

“These are a plant-based version of the steak bakes you often find in high-street bakeries. We’ve served them with roasted veg and extra gravy for a warming and substantial meal. Once assembled, these freeze brilliantly and simply need to be defrosted and baked off for an easy-win dinner.”

Cut the mushrooms into 1cm pieces. Peel and dice one of the carrots.

Pour the boiling water into a bowl and stir in the stock cube and soy sauce. Add the chopped mushroom and carrot and leave to soak for five minutes.

Transfer the soaked vegetables to one of the baking trays, reserving the marinade. Put the tray in the oven and roast for 25 minutes.

Remove and transfer the vegetables to a clean bowl to cool slightly, then put the bowl in the fridge to cool completely. Meanwhile, make the gravy. Peel and finely dice the onion. Warm the oil in the small saucepan.

Mix the cornflour and water together to form a slurry then add this to the pan. Simmer for four to five minutes to thicken. Season, then transfer half the gravy to a bowl and leave it to cool slightly then put the bowl in the fridge to cool completely. Put the other half in a jug and set aside.

Prepare the carrots and broccoli. Peel the remaining carrots and cut them into small batons. Spread them out on a baking tray with the garlic cloves. Drizzle over the olive oil and season with salt and pepper.

Trim the broccoli and separate the florets. Finely chop the parsley. Mix the filling. Once the gravy and vegetables in the fridge are cool, add the parsley to the mushrooms and carrots and stir in the gravy.

Cut one sheet of puff pastry into quarters. Lay the quarters on a baking sheet. Spoon a quarter of the filling mixture into the centre of each quarter, leaving a 2cm border around the edges.

Cut the second pastry sheet into quarters. Brush the borders of the bases with water and lay the pastry lids on top. Gently crimp around the edges with a fork to seal.

Cut two slits in the top of each bake. Combine the oat milk and brown sugar and stir until the sugar dissolves. Brush the bakes with the mixture. Bake for 25 to 30 minutes, until golden.

Cook the carrots and broccoli. Put the tray with the carrots and garlic in the oven to roast for 20 minutes, then add the broccoli, mix everything around and return to the oven for another 10 minutes.

Warm the remaining gravy. Plate up the bakes and the roasted vegetables, pour over the gravy and serve immediately.

“Our frying pan cookie in Speedy BOSH! was such a hit that we wanted to offer you something similar in this book. Enter the Frying Pan Biscoff Cookie! Crisp and chewy round the outside, soft and gooey in the middle, this is the quintessential brownie, but laced with Biscoff and studded with caramelized hazelnuts to make it that extra bit special. Grab some mates and some spoons and dig in!”

A pinch of salt

For the candied hazelnuts

Preheat the oven to 170°C. Set a steamer or metal colander over a small saucepan with 3cm to 5cm water over a medium-high heat. Grease a medium ovenproof frying pan with oil. Grease a baking tray or sheet of parchment paper with plenty of oil.

Put the potatoes in the steamer or colander, cover and steam for 30 to 40 minutes, until tender. Set aside to cool just slightly.

Meanwhile, candy the hazelnuts. Spread the nuts over the baking tray. Put the tray in the oven for five to 10 minutes, until the nuts are lightly toasted. Put the sugar and water into the greased frying pan and set the pan over a medium-high heat.

As soon as the liquid starts to bubble, reduce the heat to medium. Add the toasted nuts, mix well with a rubber spatula and let it bubble away, tilting the pan now and then, until the water evaporates and you have a light golden syrup that coats the nuts.

Quickly scrape the nuts on to the greased baking tray or parchment paper. Sprinkle over the salt and leave to cool. Meanwhile, prep the chocolate.

Wash out the small saucepan and add the water, sugar, cocoa powder and chocolate. Mix well. Set the pan over a low heat, folding the mixture with a rubber spatula now and again. Once melted, stir until smooth and take off the heat. Scrape into a bowl and set aside to cool until just warm.

Once they’re cool enough to handle but still hot, peel and chop the potatoes into the food processor. Blitz until smooth. Add the oil in a slow and steady stream until combined.

Add the vinegar and salt and pulse to mix. Tip into the bowl with the chocolate mixture. Fold until just mixed. Add the flour and baking powder to a separate bowl and mix to combine, then sieve the flours over the chocolate mixture and fold together without overmixing. Scrape into the greased frying pan. Spread the Biscoff evenly over the top.

Put the pan in the hot oven and bake for 17 to 20 minutes. Sprinkle over the candied hazelnuts and either leave to stand for 10 minutes before digging in while it’s hot, or leave to cool, cut into slices and serve.

BOSH! On A Budget by Henry Firth and Ian Theasby (HQ, HarperCollins) is available now, £16.99.