Why every Brit should join Le Good Life: There’s no health and safety, lashings of calvados, and manoirs on sale for a song – as David Hockney ditches LA for the delights of Normandy, a fellow emigre says it’s a masterstroke David Hockney, 82, has swapped his life in LA to spend the rest of his days in Normandy

We are going to have a new neighbour in Normandy, I hear. Only 82-year-old David Hockney, the artist renowned for his paintings of swimming pools and carefree Californian life.

Apparently, in recent years the old dauber has found life in the Golden State less and less carefree.

Narrow, puritanical political correctness has taken hold. Everyone has gone off sex and become a vegan, so they stay at home and eat a banana.

What Americans particularly can’t abide is anyone smoking. But as Hockney points out, he has smoked like a chimney for 60 years and remains perfectly healthy.

He is not going to quit now, has grown fed up with the censure and rebukes of health-and-safety fusspots — and within 25 minutes of arriving on holiday in Caen, on the Normandy coast, he realised he’d found paradise and decided to buy a house and stay put for the remainder of his days.

As Hockney has been saying: ‘I’d like to work and paint and be able to smoke and eat in a restaurant… thank God for Normandy. The French know how to live. They know about pleasure.’

I have lived in Normandy since about 1990 and understand exactly what he means. In a tumbledown farmhouse in the village of Saint Jean des Bois, near Tinchebray, I wrote my book about Peter Sellers.

My children went to the local school. My youngest son was born in Flers and is technically a French citizen. We became integrated in the community, taking part in the pageants and attending weddings and parties. 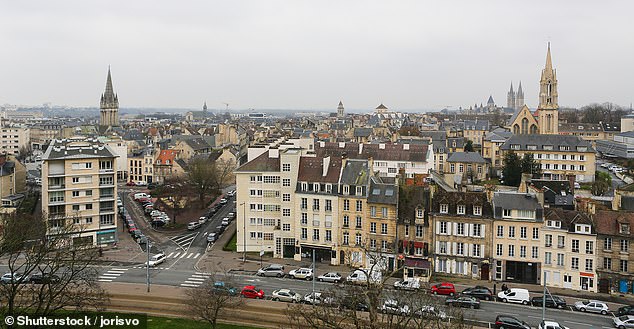 Hockney has bought a house in Caen, on the French coast, which is said to have re-energised him. He said ‘I can do twice as much work there, three times as much’ as he could in Los Angeles

It rains a fair bit, the grass is emerald green and abundant, so there are lots of cows about.

The cuisine is thus based on cream, butter and cheese — Livarot, Pont l’Eveque, Camembert. There is no nonsense about vegetarianism, let alone veganism.

After the charcuterie course and the oysters and platters of fruits de mer come the joints of beef, chicken and pork.

For pudding, after the fromage, there will be apricot or apple pies, over which may be slung a glass of calvados, the strongest spirit known to man.

In Saint Jean des Bois, every year a traction engine arrived at the farm next door — an antiquated monster of a thing with flywheels, dynamos and hissing components.

Apples were fed into a hopper, mysterious things went on out of view, and at length a black liquid was collected in large jars.

One way and another, this became calvados, or apple brandy. Our neighbours poured it into their coffee, at breakfast time. When a bottle was opened, there was a cloud of green steam.

‘This is the bottle we hid in a hole in the wall from the Germans,’ we’d be told — and every time we were told this, the level on the bottle had got higher.

Actually, this is worth remembering. Though tranquil and beautiful today, this is the very landscape where the Allies did battle with the Nazis, fighting over every hedgerow and apple orchard, after D-Day.

The big war cemeteries and beaches are well known, but sometimes, in the corner of a field or a village graveyard, you may come across a monument or soldier’s tomb. 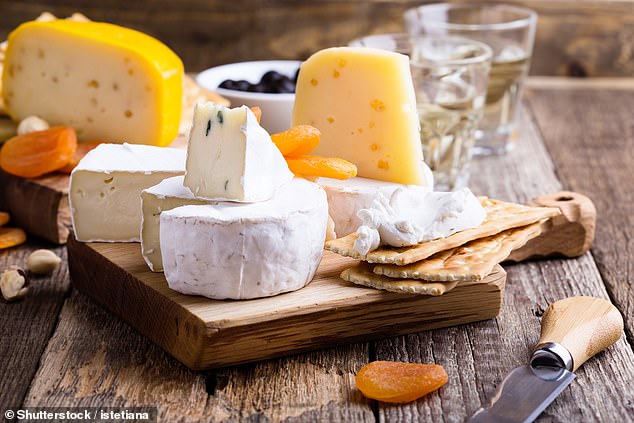 The country has been praised for its culture, history and cuisine of the country. The latter of which is often seen as being based on cream, butter and cheese

Hockney has said that ‘I can do twice as much work there, three times as much’ as he could in Los Angeles. The place has re-energised him.

He gets up early, does a painting of the cherry, pear and apple trees in his garden at his house, La Grande Cour, then at noon knocks off for a typical Normandy lunch at a nearby cafe: four huge courses for about £12, including wine and cider.

Given that last year one of his pictures sold at Christie’s for more than £70 million, he can afford a lot of Normandy meals — indeed, he could probably buy up most of Normandy itself, if he wished.

My own fate was simpler. I became very fat. It was France that turned me from looking like Stan Laurel into someone mistaken for Oliver Hardy.

Grub aside, one reason why the region is popular with Britons less wealthy than Hockney is that property is inexpensive. This is because the younger French people want nothing to do with remote rural life. They want city life. They go to Rouen or Paris.

Hence there are loads of picturesque granite houses, barns, old shops and so forth, many needing renovation, on the market for far less than a quarter of a Hampshire or Kent equivalent, although those counties are not so far away on the other side of the Channel.

As Hockney will have found out, owning a property here involves a comic opera of French builders, plumbers and electricians who could have been passed on by Peter Mayle.

I don’t think they carry tape measures, but everything is carried out with perfect accuracy.

Hockney will note the Gitanes or Gauloises that is never removed from their bottom lip at any time, particularly not when they are lighting a blowlamp or filling my central heating tank with oil, the hose spilling everywhere.

I’ll never forget the neighbour who took his pigs to market in Sourdeval on the back seat of his Citroen 2CV, in contravention of any number of Brussels animal transport directives.

Anyway, I currently have the builders in as we are converting our vast attic space into further bedrooms and bathrooms.

The family is growing and if we want to be together in one place, this is essential — though sometimes I think, why don’t I just buy a hotel?

From midday till getting on for teatime, the builders are absent, having their lunch. Then, after more cigarettes, they go home to sleep off their lunch.

They are never slow in presenting me with their bills, however, to which a hefty VAT payment is added, unless a cash arrangement can be made in advance.

The locals have no interest in old stuff, scrape away the ornamentation, and it breaks my heart to see plastic windows installed, balconies removed and pretty railings sawn off and chucked away.

Paradoxically, traditional France is being preserved not by the French, but by the British.

Nobody knows what’s occurring with Brexit. Will I be able to stay for as long as I wish, or will boring visas and residence permits be necessary? What will the healthcare situation be?

At present, flashing my European health insurance card, France is a great place to be ill, as I discovered when I put my back out opening a jar of beetroot. The hospitals are gleaming. Queues non-existent.

On the other hand, they can overdo matters. Go to the doctor with a common cold and you’ll be prescribed enough medicines to treat an African nation.

In the pharmacy, where I wanted a pair of nail clippers, the man in the white coat could have been selling me a defibrillator.

When Oscar was born in Oxford, it was birthing pools, scented candles and dolphin noises. When Sebastien was born in Flers, the French regarded pregnancy as an illness, needing loads of surgeons with gowns and masks, injections, stainless steel prongs.

It was the same with the French schools. Very formal, rote learning, grammar lessons. No rubbish about self-expression.

School lunches even had a cheese course, though a line was drawn at carafes of wine, except for the teachers. It was the best education money could buy, though it was free.

The French can be so civilised, when they try. Look at how expressive they are when they shrug. It’s a different mentality.

Plus, my three children are bilingual and, more importantly, they know their way around a wine list — one of the few achievements that count in life. And they can get through a meal without checking their phones.

Hockney is welcome to join us for lunch or dinner whenever he wants. And he can happily light up, too. As he said: ‘Thank God for Normandy!’