David Cameron admitted last night he felt ‘some responsibility’ for turmoil over Brexit.

The former prime minister told ITV News At Ten presenter Tom Bradby he was ‘haunted’ and ‘deeply pained’ by the current political landscape and was ‘deeply sorry’ about what had happened since the 2016 referendum.

Appearing anguished at times, Mr Cameron accepted some responsibility for what happened in the past three years but insisted again that having a vote on EU membership was the right thing to do. 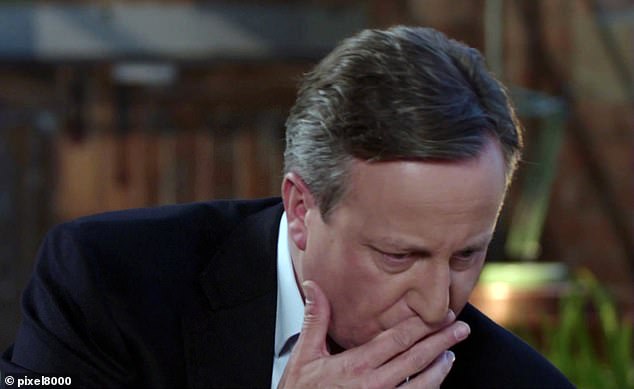 Former Prime Minister David Cameron (pictured), who is launching his memoirs this week, admitted last night he felt ‘some responsibility’ for turmoil over Brexit

In one particularly emotional segment of the interview, he said: ‘If you’re asking me, do I have regrets? Yes. Am I sorry about the state the country’s got into? Yes.

‘Do I feel I have some responsibility for that? Yes. It was my referendum, my campaign, my decision to try and renegotiate.

‘And I accept all of those things and people, including those watching this programme, will have to decide how much blame to put on me.’

He added: ‘I can’t put it more bluntly than this – I accept that that attempt [to resolve the issue] failed.’

However, Mr Cameron argued it was ‘inevitable’ that the European question would have to be settled with a referendum.

‘I’m deeply sorry about all that’s happened,’ he said. ‘There isn’t a day that goes by when I don’t think about all the decisions I made and all that has followed.

‘But when I go back to that decision – that Britain’s position needed to be sorted and we needed a renegotiation and a referendum – I believed then that was the right approach. I think I made a lot of mistakes along the way.’

The former prime minister said he had ‘huge regrets’ including losing the referendum and allowing expectations about his renegotiation to ‘run far too high’.

He also regretted the timing of the poll and some of the decisions made during the referendum campaign.

He added: ‘My attempt to solve this problem failed and decisions I made perhaps contributed to that failure but it was at least an honest attempt to grapple with the decision.’