‘We are in a class struggle now. Are you going to be with us or sit on the sidelines while these Tories butcher the working classes? Stand up and fight!’

There is something tragically pathetic about the inflammatory, prehistoric rhetoric spewed out by Mick Lynch, the militant RMT union boss behind the rail strikes set to paralyse Britain.

While this tinpot revolutionary indulges his risible Che Guevara fantasies, the grim irony is that the blue-collar workers he professes to champion will suffer most.

Employees able to work from home on Zoom won’t mind the chaos. But for millions – invariably the lowest paid – that’s simply not an option. If they can’t travel to their workplaces, their jobs and businesses will be jeopardised – and they’ll struggle to pay their bills and feed their families. 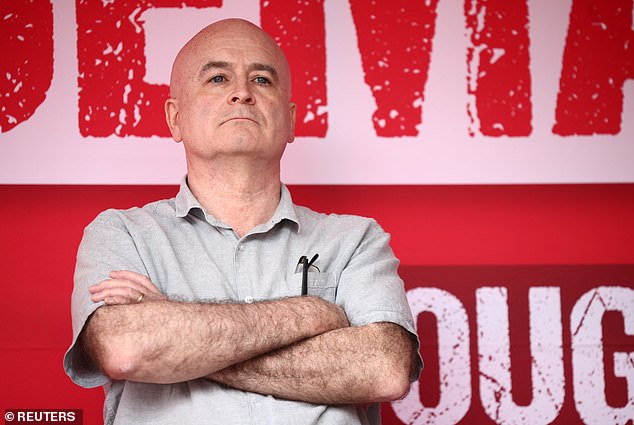 While tinpot revolutionary Lynch (pictured on Saturday) indulges his risible Che Guevara fantasies, the grim irony is that the blue-collar workers he professes to champion will suffer

And what if police officers, nurses, firefighters and others vital to saving lives are prevented from doing their jobs? The consequences could be devastating.

By walking out on three alternate days, the hard-Left unions will inflict a whole week of misery on the travelling public.

The ingratitude to taxpayers, who shovelled £16billion into the railways during lockdown to keep them operating when trains were virtually empty, is staggering.

Of course, widespread industrial action will ultimately pile on the pain for the union members themselves – as it did during the Winter of Discontent in the late 1970s.

The more inconvenient it is for people to use trains, the greater the likelihood of them turning to other forms of transport.

That would further erode the network’s finances (already in a parlous state after the collapse of passenger numbers during Covid), so putting more jobs at risk.

To that end, the grasping unions’ huge pay demand is completely unrealistic. And their attempts to impede new working practices and technology are equally unreasonable.

Labour’s failure to unequivocally denounce the planned strikes is reprehensible.

Sir Keir Starmer accuses the Tories of exploiting the walkouts to fuel division, but that’s nonsense. The only ones seeking a political punch-up are the bullying barons.

So deeply in hock is Labour to its union paymasters that Sir Keir defiantly refuses to speak up for ordinary passengers. So much for being the party of working people!

Troublingly, teachers, NHS staff and barristers are now threatening to join the rail unions in holding the country to ransom in a 1970s-style Summer of Discontent.

To prove he’s on the public’s side, Boris Johnson should stand firm – and not cave in. That ransom must not be paid.

A triumph of science

Finally, a welcome outbreak of common sense. Transgender swimmers will be banned from women’s elite races if they have been through male puberty.

All sport should aim to be inclusive. But human biology is real. It’s not fair for women to be deprived of opportunity by having to compete against someone with the size, strength and speed advantages of a male just because they identify as female.

Hopefully, this triumph of science over ideology is contagious, not just throughout sport but every sector of public life.

To take just two examples in today’s paper. Isn’t it preposterous that ‘wokery’ put diversity before patients in a recent review intended to tackle NHS bureaucracy?